Berlinale 2015: Queen of the Desert

by Maximilien Luc Proctor on February 6, 2015 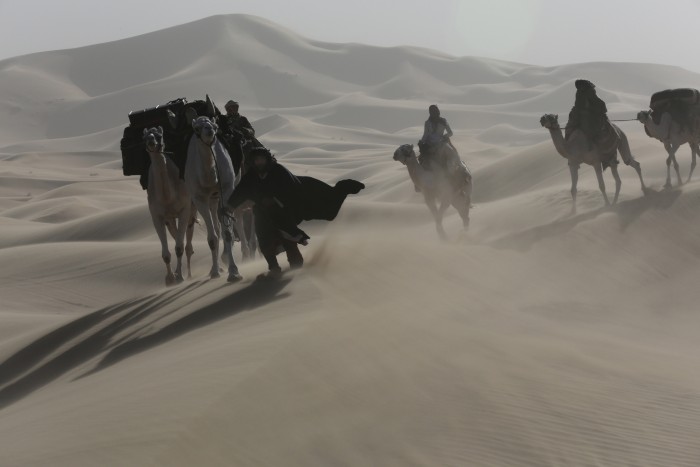 Sweeping, epic, magisterial, and grand, Werner Herzog’s Queen of the Desert is a film of scale with admirable ambition. There are unending landscape shots of an unending desert whipping sand in every direction under harsh winds. There are intimate portraits in beautiful low-light. There are sequences of incredible mise-en-scène filled with outstanding production design. And then there are the actors that walk through these spaces, decorated beyond recognition. Nicole Kidman embodies Gertrud Bell, a noble woman and an adventurer from the early 1900s who was more than eager to leave home and travel.

When Robert Pattinson and James Franco made their first appearances on-screen, they were laughed at by the press, merely for being easily identifiable icons in a large-budget film. Pattinson went on to prove himself in a well-played, modest role as the legendary T.E. Lawrence, as immortalized by Peter O’Toole in David Lean’s classic Lawrence of Arabia – a film whose influence has a strong presence in Queen of the Desert. Of course Pattinson is doomed to be endlessly compared to the shadow of O’Toole for taking on the role, but this makes his performance all the more admirable. Franco performs well but can’t seem to escape the very fact that he is James Franco. Nicole Kidman seems odd opposite him, as her makeup renders her visibly near him in age, yet their real-life age difference is still felt.

So much of the film deals in stuffy old-fashioned romanticism appropriate to the period-setting yet the fact remains that the exaggerated melodrama of it all is one of the film’s biggest let-downs. Luckily, there’s more to it than that – it is a film about looking through time, as it covers periods of Bell’s life with progressively smaller intervals of elapsed time between scenes; ‘Three Years Later’ followed by ‘Three Months Later’ and so forth. There is a wonderful time-lapse shot, and there is the very idea of looking through time evoked by Franco as Henry Cadogan showing a coin from Alexander the great to Bell and mentioning that it is thousands of years of history looking through at them. So too are we the audience looking through a hundred years of history to witness this historical re-enactment. Then again my reading such a prospect into it could be a perfect embodiment of a card trick Cadogan shows Bell: the greatness of the trick lies in the fact that the magician doesn’t touch the cards, or at least in the fact that he can trick you into thinking he doesn’t. Interpretation is up to the audience.

As a standard biographical drama, it’s a bit overdramatic, but the real magic lies face down on the card table; first one must flip the cards.

Maximilien Luc Proctor graduated with a Bachelor’s degree in Film and Media Studies at the University of Oklahoma. In his spare time he plays guitar and sings in a band, as well as watching and making films however and whenever possible – as a one-man-production-team making avant-garde shorts or as a director of a small-scale independent feature productions. He likes what he sees in cinema and wants to celebrate the good stuff whenever possible.
You might also like
Berlinale 2015Queen of the DesertWerner Herzog

END_OF_DOCUMENT_TOKEN_TO_BE_REPLACED
Taylor Sinople Picks: The 16 Best Films of 2016
Form and Function in Alex Ross Perry’s “Queen of Earth&...
Digging for Fire and Unexpected: Husband and Wife Process Parenthoo...
Every Thing Will Be Fine 3D Review