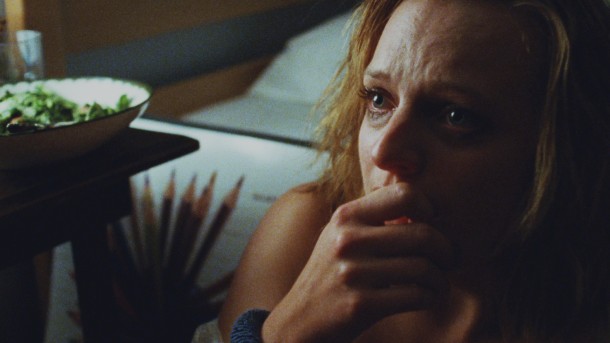 Note: Queen of Earth was not screened in-competition, but as a part of the ‘Forum’ programming sidebar of the Berlinale 2015.

Alex Ross Perry’s Queen of Earth is equal parts fresh and disappointing, thankfully suggesting the best may be yet to come. Perry seems to have honed his craft since his 2011 debut, The Color Wheel. He is certainly more self-assured. The film opens with an excruciatingly claustrophobic Cassavetes-style close-up of a devastatingly teary-eyed Elisabeth Moss as Catherine, going through a heavy break-up shortly after the death of her father. Moss’s performance is bold and varied throughout, as is that of Katherine Waterston (Inherent Vice) as her best friend, Ginny. Together, the two go to the summer home of Ginny’s family, as a reprieve from city life. Unfortunately, it turns out things between them are no longer as they once were.

Perry slowly builds a brooding mood through uneasy camera work, soft focus, steady zooms, intimate long-takes, an unsettling score and careful sound design. The mystery of exactly what all this brooding is leading to keeps intrigue levels high for the first two-thirds of the film.

Queen of Earth is more mature than Perry’s previous effort, Listen Up, Philip – full of dialogue which came drenched in sometimes painfully unfunny irony. Here there is much more gravitas to the same type of language, and that Moss is this time in the lead is no coincidence. It’s a step-up visually as well, as there are at least three truly great shots to be found in its 90-minute runtime, highlighting an advanced understanding of interesting compositions and using spatial relationships between actors to symbolic and aesthetically pleasing ends. Similarly, there are at least three instances of exceptional editing highlighting similarities and contrasts between characters through their tactile interactions with different elements. One of the best examples of this is a moment of running water which cuts to soda being poured into a glass.

Finally, all the dread builds to a singular moment of surreal Rosemary’s Baby-inspired madness and fizzles out into a forgettable conclusion. There is a lot to love about Queen of Earth, but not quite enough to sustain it for the entirety of its duration. That said, whatever Alex Ross Perry makes next just might prove a masterpiece.

Maximilien Luc Proctor graduated with a Bachelor’s degree in Film and Media Studies at the University of Oklahoma. In his spare time he plays guitar and sings in a band, as well as watching and making films however and whenever possible – as a one-man-production-team making avant-garde shorts or as a director of a small-scale independent feature productions. He likes what he sees in cinema and wants to celebrate the good stuff whenever possible.
You might also like
BerlinaleBerlinale 2015Film Festivals

END_OF_DOCUMENT_TOKEN_TO_BE_REPLACED
Taylor Sinople Picks: The 16 Best Films of 2016
Form and Function in Alex Ross Perry’s “Queen of Earth&...
Digging for Fire and Unexpected: Husband and Wife Process Parenthoo...
Every Thing Will Be Fine 3D Review