Berlinale 2015: Nobody Wants the Night 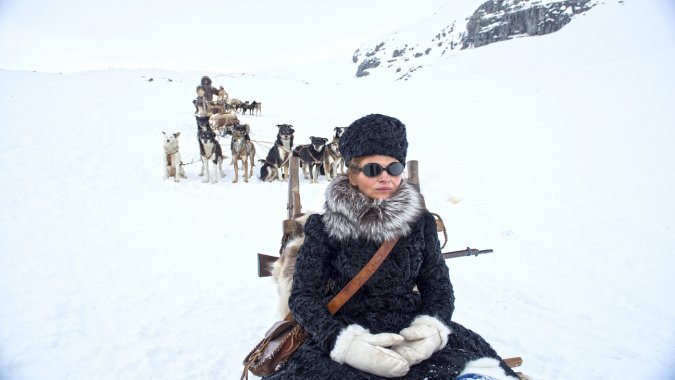 Berlinale’s opening film, Nobody Wants the Night begins as an epic adventure film full of clichés and ends up an intimate character study of two women in a confined space.

Set in 1908, the film tells the story of fictional characters based on real-life people. Juliette Binoche plays the dainty Mrs. Josephine Peary, whose husband is on an expedition to the North Pole. We are introduced to her as she shoots her first polar bear, hinting at something under her supposedly delicate and civilized exterior. In the opening minutes, exposition rears its ugly head in through both an unnecessary voice-over and dinner table conversation that feels more like a story-teller having to continue to retroactively fill us in on forgotten details. One instance of narration actually reached a poetic level which so much of it seemed to yearn for but never quite reached again; that Josephine saw God as an instrument, not a reality. Josephine wants to get to a base camp where she can wait for her husband to get back from the pole. There are a number of distractingly blunt warnings that it will simply be ‘too dangerous,’ broadcasting the coming of a particular loss of life far too prematurely. The sheer amount of dialogue of this nature is overwhelming at first, but slowly gives way to more frequent images which start to dig deeper into what the film is really about.

There are a number of scenes which highlight the sacrifices caused by hanging on to traditions merely for tradition’s sake. Josephine carves words into different mile markers, so as to designate and document her travels, highlighting an American exceptionalism blended with self-importance which leaves out her non-American crew members, without whom she might very well be helpless. They stand on the backs of sleds led by dogs as she sits idly and is taken passively from place to place. She likes to imagine she is as much of an explorer as her husband, but the truth might be that neither does as much as they think they do.

There comes a point at which she must wait for her husband. Most of her team leaves to head back — because as they’d warned her, it’s too dangerous to stay because of the elements and the winter to come. Josephine’s hard-headed ideas of tradition ensure she stays so as to risk her life just to be there when her husband gets back. So, she stays. So too, does an Inuit girl stay, named Allaka. There is a lesson of tolerance and understanding here that has been told a hundred times over in a hundred other films, but where Nobody Wants the Night differs lies in its surprises; both narratively and emotionally. As the story progresses and a pair of minor twists are unveiled, the lesson moves beyond mere tolerance and human understanding to a story of a true bond and the idea of a domestic situation in complete opposition to the standard home life of the time.

There are moments of brilliance both brief and fleeting, quickly buried under the snow to leave plenty of gripe-worthy material left out and exposed to the elements, but if for no other reason, the film is refreshing for being a sincere story featuring actresses of two different races in the two lead roles directed by a woman. In 2015, such a filmmaking scenario should hardly be novel, but it is, and that’s one of the film’s biggest and best points.

Maximilien Luc Proctor graduated with a Bachelor’s degree in Film and Media Studies at the University of Oklahoma. In his spare time he plays guitar and sings in a band, as well as watching and making films however and whenever possible – as a one-man-production-team making avant-garde shorts or as a director of a small-scale independent feature productions. He likes what he sees in cinema and wants to celebrate the good stuff whenever possible.
You might also like
Berlinale 2015Nobody Wants the Night

END_OF_DOCUMENT_TOKEN_TO_BE_REPLACED
Taylor Sinople Picks: The 16 Best Films of 2016
Form and Function in Alex Ross Perry’s “Queen of Earth&...
Digging for Fire and Unexpected: Husband and Wife Process Parenthoo...
Every Thing Will Be Fine 3D Review