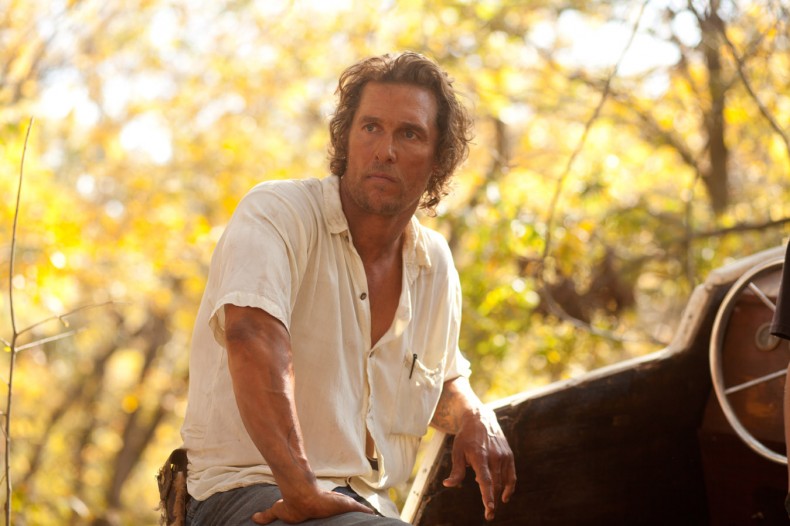 Overall Rating
9.0
9.0
Critic Rating
You have rated this

On a small island somewhere in rural Arkansas sits an old, rusted boat with no motor, inexplicably suspended high in the air by a tree. “It’s a helluva thing,” says Mud.

Ellis, a fourteen-year-old boy that lives in a houseboat on a river, along with his best friend Neckbone (Jacob Lofland), first discover the tattooed, superstitious Mud (Matthew McConaughey) on the shore of that strange island with that mystical, flying boat. Mud grew up in the area; he even knows some of the same people as the boys. Ellis (Tye Sheridan) and Neckbone find Mud (who says he is on the island waiting for his girlfriend to meet him) to be harmless enough, despite the .45 pistol sticking out of his waistband.

Later, Ellis takes pity on the drifter and decides to bring him some food – canned green beans that Mud wolfs down. This act of kindness opens a bond of trust between the boys and the eccentric man and he reveals his true reasons for being on the island. It involves an obsession with a girl (Reese Witherspoon) and the things that he did to the man who hurt her. The exact details aren’t as important as the raw sentiments being humanized on screen in Mud – a portrait of all kinds of love, both blossoming and decaying.

Performances stand at the forefront of the excellent craftsmanship on display in Mud. Tye Sheridan and Jacob Lofland bring crucial authenticity to the two southern kids. Sheridan’s Ellis character may hit more notes, but neither of them are afraid of the dramatic close-up.

McConaughey is similarly working at the top of his game, turning in another surprisingly dramatic performance. Ten years ago, it seemed he was on his way to becoming a disposable heartthrob, but with rich characterizations like his roles in Mud and Killer Joe, McConaughey is becoming one of the best working actors today.

Director Jeff Nichols has crafted a story of pleasing simplicity. Unlike his previous (albeit genius) effort Take Shelter, Mud doesn’t offer any sort of mysterious element – it is successful in its linearity. Similar to Take Shelter, though, this film is examining love as a construct that shapes, or destroys, our lives. Mud is a fugitive because of untamable love, Ellis may lose the river life he’s grown accustomed to because of his parent’s deflating love, and Ellis himself feels romantic love for the first time when he hits it off with an older high school girl. All of these portrayals work, and work well.

Creating a snapshot of life in the South isn’t easy. Removing the easy stereotypes behind any locale or group of people strips bare the quality of work – it becomes plainly evident whether a filmmaker has succeeded or failed in portraying a type of life that many viewers will be entirely unfamiliar with. Luckily, Nichols crafts a fantastic narrative world that you will feel you have lived in.

One of the best decisions regarding this was to feature only a handful of locations. You’ve got Ellis’ house, the river that leads to the island, and the island. The highway that leads to the town, and the town itself. It feels great to have a handle on the geographical relationship between different locations when so often that’s nonexistent.

Shortly after Ellis and Neckbone learn why Mud is camped out on the island, they run into the very woman he’s waiting there for. The adventurous boys then agree to pass messages and scavenge parts for the boat in the tree to help Mud make an escape by sea with the girl. Standing in their way is a group of bounty hunters tracking Mud.

As Ellis’s obligations to help Mud become more dishonest and even dangerous, the strength of the will for love to exist in the world is tested in many ways. When asked why he would do so much for what is essentially a homeless man living in a tree, Ellis’s answer comes from the simplified mind of a fourteen year old: “because ya’ll love each other.” In fact, much of the conflict lies in Ellis’s inability to fully understand the limitations and realities of love.

Cut into the dialogue heavy sequences are beautiful lyrical shots of the surrounding forests – from sweeping shots over the river, to micro views of the bugs, spider, and snakes in the area. Every minute is captivating.

To the potential of low budget character studies, Mud is exemplary.

Taylor is a Chicago-based writer and aspiring film historian. He is the editor here at TFP, and has contributed to a number of international publications such as Cinema Scandinavia, PopMatters, and Room 101 Magazine. He can also be found listening to podcasts, researching topics he has little use for, or running after a city bus.
You might also like
jacob loflandmatthew mcconaugheynaturereese witherspoon

by Josef Rodriguez on January 25, 2015
Sara Colangelo’s debut feature is wonderfully acted and beautifully filmed, but its narrative strength is constantly hampered by Colangelo’s refusal to linger on any kind of nuance or subtlety.
comments
Leave a reply
Add Comment Register

END_OF_DOCUMENT_TOKEN_TO_BE_REPLACED
Taylor Sinople Picks: The 16 Best Films of 2016
Form and Function in Alex Ross Perry’s “Queen of Earth&...
Digging for Fire and Unexpected: Husband and Wife Process Parenthoo...
Every Thing Will Be Fine 3D Review