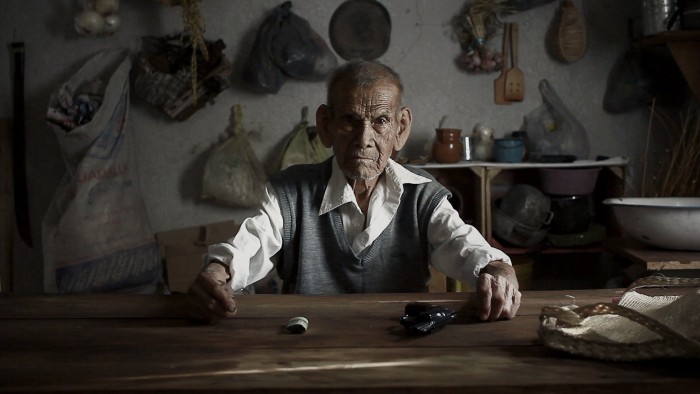 Note: La Maldad was not screened in-competition, but as a part of the ‘Forum’ programming sidebar of the festival.

It begins with a slow static long-take of a smoldering fire surrounded by blackness. It’s not until a minute later that details come into view or comprehension. Slowly, it becomes clear that the forms gliding through the air aren’t birds but flying bits of burnt stalks. It’s not a campfire, but a burning crop. And then it burns: from right to left, in real time. A spark flies and catches further down the line, and the wildfire spreads. This goes on until blackness has given way to the beginnings of a sunrise. The fire finally dies out, but a new one kindles in the distance. This is how evil spreads; simply and one step at a time. There are small shadowy figures around the fire. Are they the victims of these flames? The perpetrators? Innocent bystanders? Anyone at the scene of the crime so early on is a potential suspect or victim.

Following this prologue of sorts, there is a fixated focus on the small details of a life unknown to most film-goers; authentic scenes of life in rural Mexico. There is an authenticity to the ‘production design’ which really can’t be designed, only found. Our protagonist is an old man who is diagnosed with terminal cancer – a real-life diagnosis, according to a statement by director Joshua Gil. It doesn’t seem to have much effect on his daily routines. Eventually though, our man decides it is high time he finally goes on a pilgrimage to the Mexican Film Institute, where he walks right in, sits down, and starts telling a pair of executives about his script – written years ago after the love of his life left him. He tells them it is the greatest script ever written because it features 12 original songs the likes of which have never been heard. He begins to sing for them, and is escorted off the premises. As he starts his trek home, there are massive protests occurring, complete with cries of “Fraude!” and “Assassino!” and “The people united against the power!” – real footage from the 2012 Mexican presidential election. These sounds swell into an overwhelming force and the film ends. You might cry, “Spoilers!” but describing every narrative event in the film (which I have not done) does not come close to encapsulating the overall atmosphere or the variety of visual pleasures and mundane events it contains.

La Maldad is the type of film that’s easy to call out or even dismiss for being “about nothing” if not given the patience and thought it asks of viewers. Every moment of its short 74 minutes is felt twice-over, but it is far more rewarding if viewed as a think piece about leaving room for the addition of audience thought in each shot.

Maximilien Luc Proctor graduated with a Bachelor’s degree in Film and Media Studies at the University of Oklahoma. In his spare time he plays guitar and sings in a band, as well as watching and making films however and whenever possible – as a one-man-production-team making avant-garde shorts or as a director of a small-scale independent feature productions. He likes what he sees in cinema and wants to celebrate the good stuff whenever possible.
You might also like
BerlinaleBerlinale 2015EvilnessFilm Festivals