Bleeding Leads and the Earl Williams Reprieve: How “Nightcrawler” Mirrors “His Girl Friday” 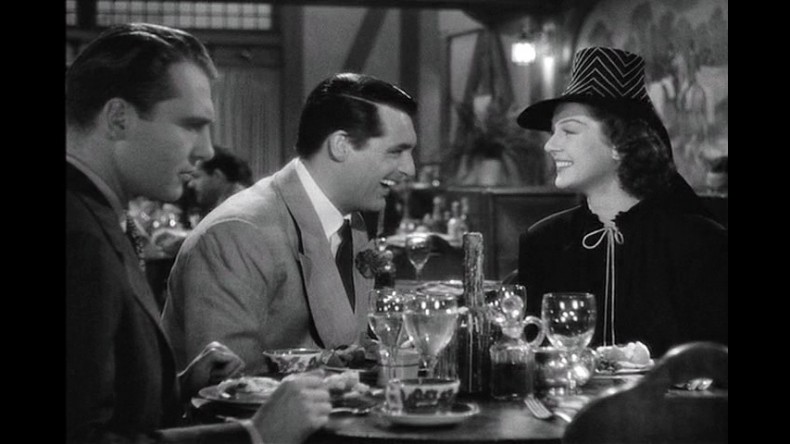 It is clear that Dan Gilroy’s “Nightcrawler” (2014) explores the dark side of journalism – the rule “if it bleeds, it leads” seems to be the mantra for freelance cameraman/sociopath Louis Bloom (Jake Gyllenhaal) and his news director, Nina Romina (Rene Russo) – but after a week of hashing and rehashing this thriller’s exploration of the line between moral and immoral, “Nightcrawler” puts itself in the unlikely company of another tale of unethical journalism: Howard Hawks’ screwball comedy “His Girl Friday” (1940). 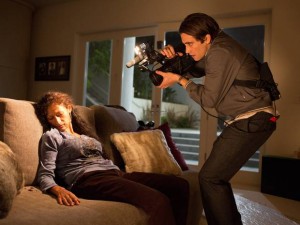 What makes both films so similar is the moments of comedy with darker undertones. While Hawks’ film is clearly more deliberate in its use of comedy, Gilroy did not deprive the audience moments to chuckle – be it out of disbelief or nervousness. In “His Girl Friday,” audiences laugh as Walter Burns (Cary Grant) bickers with his ex-wife/former reporter, Hildy Johnson (Rosiland Russell), convincing her to come back and work for him instead of marrying another man, Bruce (Ralph Bellamy). Meanwhile, a prisoner, Earl Williams (John Qualen), is set to be executed even though there is reasonable belief he is mentally unstable. The Williams story is present through most of the film, evidenced when a conversation is interrupted between Hildy and her former co-workers by the police setting up a platform for a hanging.

While Bloom certainly lacks the charisma of Burns, and Rick’s (Riz Ahmed) quarrels with him aren’t packed with the sarcasm and wit of Johnson, viewers still laugh at Louis’ odd dialogue and his “internship” offer for Rick. Also, Bloom’s strict dedication to his houseplant warrants a few chuckles. 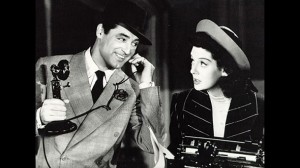 Cary Grant and Rosalind Russell in “His Girl Friday.”

However, this is the same man who assaulted a security guard for a watch and hocks stolen manhole covers to the highest bidder. These pale in comparison when he turns to journalism, as Bloom shows no regard for the human lives affected by the horrific accidents and crimes he covers. Louis is only concerned with getting the best footage – illustrated when he moves a car accident victim to get a better shot. Regardless of their humorous ways, a darkness looms in the background of many scenes of “His Girl Friday” and “Nightcrawler.”

Humor mixed with drama is not the only thing that links these two films. Both are also connected by character’s personal motivations which fuel their unethical – and sometimes illegal – behavior. Bloom is looking to create a career for himself. What does this cause him to do? Cross police lines, tamper with crime scenes, harass victims with his invasive camerawork, and – most disturbing – orchestrate a shooting that endangers many innocent people, all to create an action packed ending to a previous story–the triple homicide he has been obstructing police from investigating.

Fans of Cary Grant can rejoice that Walter Burns is not as despicable as Bloom, however he still falls victim to his own unethical nature. The entire duration of the film is Burns attempting to stop Johnson from getting remarried. How does he do this? He forces her to cover the Earl Williams trial because he knows she can’t stay away. He’s getting a news junkie her fix. Burns also hires a shady character to pickpocket Bruce, so he cannot buy train tickets out of town, and he even trumps up fake charges so Bruce gets arrested. It’s Burns’ smooth talking that softens the heinousness of these actions.

While personal motivations fuels these integral characters, it’s important to note they use these same techniques to form relationships. Two scenes from “His Girl Friday” and “Nightcrawler” stand out in particular – both involving restaurants. When Burns takes Johnson and her new beau out to lunch, it’s clear there are ulterior motives at play. Burns talks about being happy for them, and even buying insurance through Bruce’s company. In reality, he is hatching a plan to break up their relationship. By getting Hildy to work for the newspaper one last time, it will help him win her back. Burns’ enthusiasm is a cover for something larger. After all, it is Hildy who jokes that Burns’ “grandfather was a snake.”

Fast forward 74 years, and audiences are watching Louis Bloom and Nina sit in a dingy Mexican restaurant. While Nina holds a higher title than Louis, it is this scene where the power shifts and she begins working for him. He does this by forcing her into a sexual relationship. This uneasy exchange involves Louis reminding Nina of her expiring contract and her news station’s low ratings. If she does not engage in a relationship with him, he will move on to a higher paying station and she will likely be out of a job. Like the exchange between Burns and Johnson, Louis is using his professional power to create a relationship. 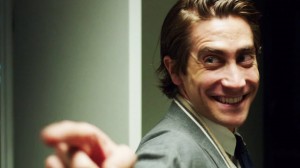 In the end, both men get what they want. Bloom’s company, Video Production News, is growing rapidly. He has three new “interns” and multiple vans to cover breaking news even faster and more efficiently. The police are unable to pin any obstruction of justice charges on him, and Nina appears to be loyal to their agreement, as it furthers her career.

Meanwhile, Walter Burns also gets what he desires. After Hildy gets the true scoop on Earl Williams, his newspaper will deliver a hard hitting story that will warrant critical acclaim and public praise. He is even able to get a reprieve to stop the Williams’ execution. His personal desires are also met, as he wins Hildy away from Bruce. 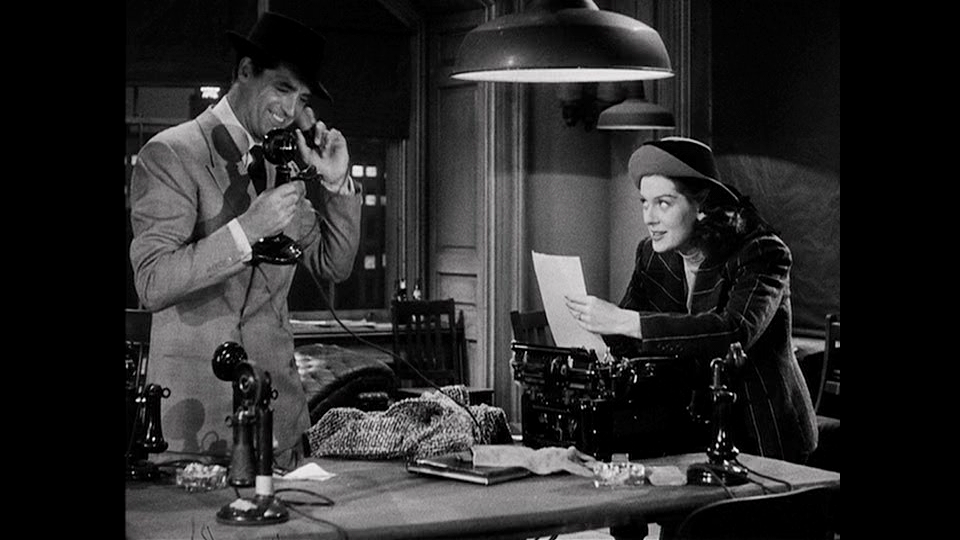 Walter wins Hildy over in the end.

While watching Walter and Hildy rush off to get remarried does not leave the same sour feeling as seeing Louis Bloom drive off in one of his news vans, these moments have a few commonalities. Lives have been changed forever – for the worse in the case of Rick and Bruce – in order for the main characters to succeed. One must navigate corruption, greed, and sometimes murder to make it in journalism. This leaves the viewer with a powerful message: not everyone has the stomach to make the nightly news.

Due to an affinity for Classic Hollywood, Chris spends most of his time looking for the “newest” old movies to watch. When he’s not scanning Netflix, or annoying his girlfriend with movie references, Chris spends his free time wishing he could be Cary Grant.
You might also like
Jake GyllenhaalNightcrawlerRene Russo

by Zack Miller on November 2, 2014
Editor’s note: Our “Double Exposure” reviews pit two or more critics against one another on the same film to hash out their differences in opinion. Agree with what we have to say or want to offer your own take? Leave it in the comments below.   Zack Miller: “Nightcrawler” opens on an empty billboard, illuminated by […]

by Zack Miller on September 13, 2014
Despite the opening night gala keeping me out until 2am, I managed to cram in a few hours of being a productive member of society this morning. After slipping away from work a bit early, I started the second day of the fest with a “double” dose of Jessica Chastain and James McAvoy, since “The […]
Comments
Leave a reply
Add Comment Register

END_OF_DOCUMENT_TOKEN_TO_BE_REPLACED
Taylor Sinople Picks: The 16 Best Films of 2016
Form and Function in Alex Ross Perry’s “Queen of Earth&...
Digging for Fire and Unexpected: Husband and Wife Process Parenthoo...
Every Thing Will Be Fine 3D Review