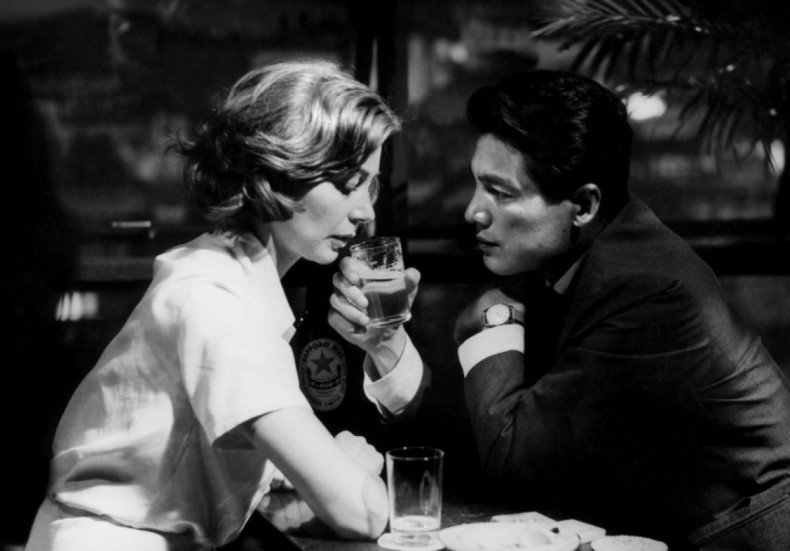 A turning point in World Cinema, "Hiroshima mon amour" takes its audience on a beautiful journey through human emotion, closely examining our social memory and ability to forget terrible events in our individual and collective past.

After a 4K digital restoration for the 2013 Cannes Film Festival, Alain Resnais’ “Hiroshima mon amour” is being given a limited release in theaters. A pillar of the French New Wave movement, “Hiroshima mon amour” broke from traditional cinematic form, and is a completely unique piece of film history. Although he hesitated to associate himself with the New Wave movement (and is more accurately tied to the “Left Bank” group of auteurs), Resnais’ work (through financing or cultural/political atmosphere) is invariably tied to the movement.

Jean-Luc Godard called “Hiroshima mon amour,” “the first film without any cinematic references,” and in that assessment, Godard is absolutely correct. An almost wholly unique cinematic experience, “Hiroshima mon amour” takes its audience on a journey through the entirety of the human condition, exploring war, love, peace and hatred.

A tangle of body parts are embracing underneath a shower of glittering “snow.” Overlaid with narration and imagery of the terrible aftermath of the atomic bombings of Hiroshima, the “Hiroshima mon amour” begins as a documentary condemning the horrific actions taken by the United States. Taking place over the period of a day (or an eternity, as the narrative is a free flowing amalgamation of events), the film reveals its true focus: the exploration of the relationship between Lui ‘Him’ (Eiji Okada) and Elle ‘Her’ (Emmanuelle Riva). Elle is an actress filming an international peace movie in Hiroshima, and Lui is a local architect and politician, captivated by her beauty.

Director Alain Resnais rejects traditional narrative structure, and instead focuses on the emotions and the mental strain the affair is causing. Slowly drawing out time into an indistinguishable timeline, Resnais interlaces his story with the memories of the war and past love interests of Elle. Serving as a contradictory element to her memories (in place of silent mental doubt or forgetfulness), Lui refutes many of her recollections, yet is her constant, and unyielding companion during their time together.

Resnais film is a breathtaking introspection on both individual and societal memory. Starting with the opening monologue about the results of the atomic bomb, “Hiroshima mon amour” shows how quickly a group of people can forget their terrible past, regardless of the struggle to keep the past in the present memory. Inability to forget, too, is juxtaposed with the fight to remember, becoming yet another reminder of the cruelty of life. Positioning the ability of the Hiroshima citizens to forget their terrible past against Elle’s desperate desires to hold on to her memories, the film explores humanity’s relationship to memory and the past. Whether it is the lessons the World learned after the bomb was “tested” on Japan, or the feeling of being deeply in love, Resnais proposes that all memory must, one day, fade.

In clouded and ambiguous vignettes, Resnais portrays the human memory in all of its glory and flaws. Chunks of events – a kiss, a waving figure in the distance, the way a room felt or tasted… Resnais captures the fleeting incompleteness of memory in a way that is true to life, and (to this day) unmatched on film. With elegantly framed shots, cuts, and fading, Resnais paints an arresting portrait of a troubled woman. A meticulous deconstruction of her mental processes throughout the brief affair, Resnais places his audience inside of Elle’s consciousness.

Unlike many of the Left Bank or New Wave directors (and many directors today), Resnais refused to write his own screenplays. Even in the latter half of his career when he collaborated on the script, he did so under the pseudonym Alex Reval, so his name would only appear once in the credits. Sharing authorship of his films with writers had a profound effect on Resnais’ films, as each assume the personalities of their counterparts. In “Hiroshima mon amour” one can really feel the feminine presence imparted by writer, Marguerite Duras, and the emphasis she placed on Elle’s past. With “Hiroshima mon amour” taking on a female co-director, and featuring a strong female lead, the film made great strides toward gender equality both in front of and behind the camera (although this has unfortunately not caught on).

“Hiroshima mon amour” is a shining example of French New Wave cinema that, to this day, retains its political and social message. Excluded from the official selection at the 1959 Cannes Film Festival, because of its “anti-nuclear weapon” message, Resnais’ film still carries a strong political message. Perhaps even stronger today, footage from the atomic blasts and the ensuing devastation, may reignite the time cooled emotions of a bygone era. With the ability to reintroduce younger audiences with the horrors witnessed by generations before, Resnais’ film serves as a valuable piece of cultural “memory” that should never be forgotten.

With its intuitive and introspective filming technique, and valuable commentary on peace and societal memory, Alain Resnais’ “Hiroshima mon amour” is an invaluable and powerful film from one of the most celebrated periods in film history. One of the first in a series of films that challenged traditional narrative and visual forms, “Hiroshima mon amour” is a cinematic experience one is not likely to soon forget.

END_OF_DOCUMENT_TOKEN_TO_BE_REPLACED
Taylor Sinople Picks: The 16 Best Films of 2016
Form and Function in Alex Ross Perry’s “Queen of Earth&...
Digging for Fire and Unexpected: Husband and Wife Process Parenthoo...
Every Thing Will Be Fine 3D Review