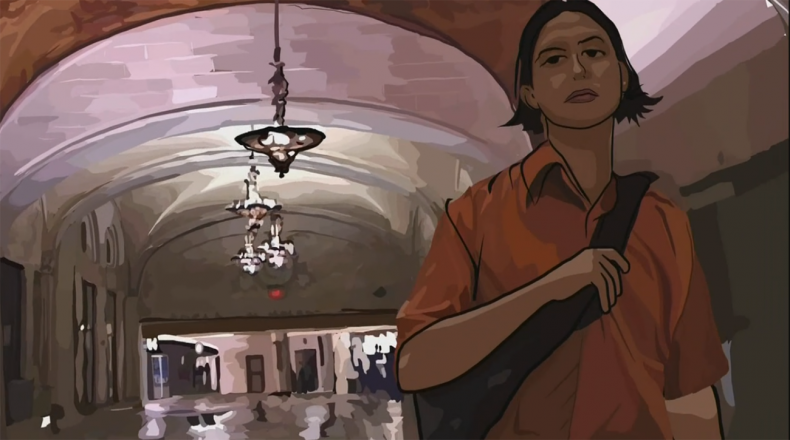 Transferred from live action to animation, Richard Linklater’s “Waking Life” is a novel approach to filmmaking that promotes inquiry amidst its dreamy, episodic structure.

Shifting almost aimlessly through vignettes, the unnamed protagonist of “Waking Life” (Wiley Wiggins) moves from philosophical discourse to philosophical discourse, becoming increasing desperate for answers. He is at times both blessed and plagued by a seemingly ceaseless slumber. And it is from this perpetual dream that Richard Linklater derives the narrative style. There are no transitions but continual arrivals at new locations and meetings with new characters. It mirrors the logic of dreams, never questioning the adventures or conversations being held, just simply engaging in them before being whisked away to further reaches of imagination.

Though the film was shot using digital videos of the actors and academic participants, artists used a technique called “rotoscoping,” overlaying this footage with hand-painted animation. The same effect, in a much more highly defined though less successful degree, would be used again by the director in 2006 for “A Scanner Darkly.”  It reiterates the dream-state of the main character, allowing an amorphous quality to its characters and settings. The animation continually takes the form of the postulations of its subjects, ranging from professorial to provincial, sadistic to humanitarian. As famed tour guide/philosopher Speed Levitch exalts self-awareness with mania and insight, his words come to life amidst his monologue. A man locked in a cell is colored bright red and shot erratically as he menacingly details the various tortures he will subject his perceived enemies – lawyers, judges – who have caused his incarceration.

“Waking Life” contains that rare quality possessed by works like Robert Altman’s “Images” or Ingmar Bergman’s “Persona.” Depending on the viewer, or even on the mood, comfort, or place in life of a single viewer, entirely different films can be seen. That is to say, there is such a breadth of philosophical inquiry that one may latch on to negativity or positivity, affirmation or disillusionment, and it is not so much a choice but a reflection of personal fears or lack thereof. One feeling uneasy about their intellect may obsess over one biologist’s assertion that the gap between true geniuses, the likes of Friedrich Nietzsche or Plato, and the average human is greater than that of a chimpanzee and that same human. Similarly, another self-conscious viewer may revel in the exuberance for life of Existentialists like Jean-Paul Sartre as posited but yet another expert, knowing that they themselves are in control of their own essence. Years ago when I first saw this film it worked to ease my fear of mortality, inscribing me with a (admittedly short-lived) sense of stoicism. Upon my most recent viewing it exacerbated personal doubts of agency, leaving me feeling more like Howard Beale than Marcus Aurelius.

Our protagonist, one of the last dreamers as told to him by a young transient, flies between these discussions. He pulls the intellect, beauty, and cynicism from unknown sources. We do not know where the invention and occasional clarity of our unconscious minds is gleaned. Speaking to philosophers, musicians, creatives, and generally out-there folks, the only underlying factor in his journey is, in his own words, the “benefit of consistent perspective.” And while this dream world is daunting and nebulous, he is able to contemplate the ruminations and insights of the characters of his own creation, learning of his own dream-state but never knowing of his own waking fate.

If it is not clear already, there is no real plot to “Waking Life.” The only real conflict that emerges is the inability for the hero to escape his dream, continually waking up back in his bed only to find that it is simply another dream. The main character is not present for a number of the episodes found therein. It serves as an exploration into divergent perspectives and a gateway to further our own understandings, a sampling of theories meant to ignite and stimulate intellectually. It is certainly no master class in philosophy, but imbues a sort of lust for learning more about the subjects at hand. It asks questions but rarely answers them. In many ways it is a largely Socratic movie, encouraging dialogue and critical thinking through an occasionally daunting series of conversations and monologues.

If this is not Richard Linklater’s finest film, it is almost impossible to argue it is not his most interesting. Its free-wheeling style, eclecticism, and expert cast of actors and non-actors alike offer a wholly original approach to both narrative and cinema. It is unbound, propelled by a quest for knowledge and answers to a world shrouded in complexity and mystery. And while you may not find answers in “Waking Life,” it may encourage you to find them yourself.

by Taylor Sinople on July 13, 2014
In 1991, Richard Linklater reignited the indie scene with his wandering, Austin-set drama “Slacker,” which used arbitrary run-ins to pass the narrative baton between on-screen characters connected only by coincidence. “Slacker” was a niche hit, and has remained so to this day, but Linklater’s very next film, 1993’s “Dazed and Confused,” broke him into the mainstream. […]
Comments
Leave a reply
Add Comment Register

END_OF_DOCUMENT_TOKEN_TO_BE_REPLACED
Taylor Sinople Picks: The 16 Best Films of 2016
Form and Function in Alex Ross Perry’s “Queen of Earth&...
Digging for Fire and Unexpected: Husband and Wife Process Parenthoo...
Every Thing Will Be Fine 3D Review