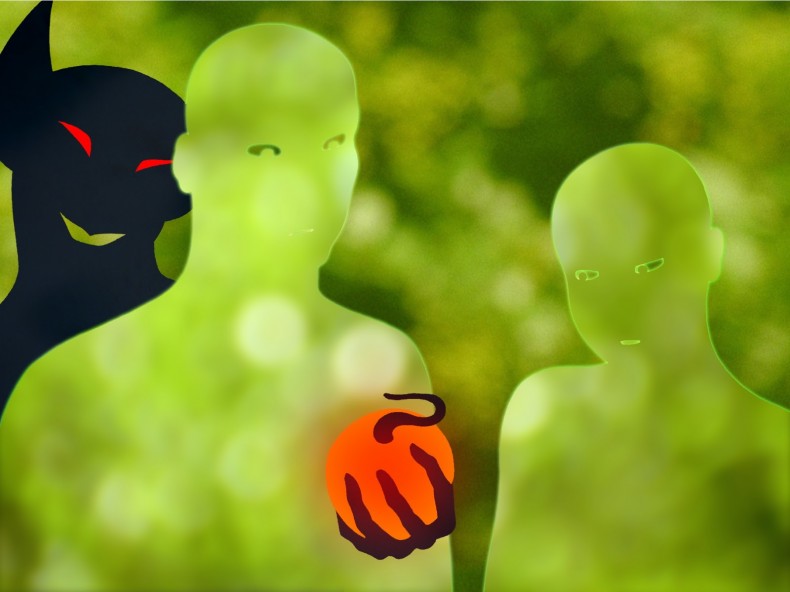 One of the major benefits of film as a medium is its ability to use a variety of styles and techniques to explore and convey a message. It provides an opportunity for disjointedness and using visuals to bring out a complex and confusing idea. “Az Ember Tragédiája” represents an excellent manipulation of film’s strengths as a medium to explore these complicated ideas.

Based on a Hungarian play of the same name, “Az Ember Tragédiája” tells the story of Lucifer (Fenrec Borbiczky) setting out to prove to God that the creation of man is a failed experiment. He does this by taking Adam (Péter Blaskó ) through history and proving that every one of Adam’s hopes, dreams, and goals are doomed to fail, as is Adam himself.

One might assume that this is a deeply pessimistic film about humanity if it consistently beats down each of Adam’s ideals. There is a great deal of support for the idea that this film is negative about mankind and what it has and will accomplish. At the same time, however, a thread of love and guidance runs through it, with Adam consistently being saved from one disaster or another by an incarnation of Eve (Ágnes Bertalan). Even at the end of the film, she continues to save him, reinforcing the ideas of love and fraternity as the ultimate saviours of mankind.

Predictably, there are many, many themes running through the film, and not all of them are effective. The film itself took more than twenty years to make, being made in small chunks. One result of this is that the messages and themes are often jumbled and disjointed, making it difficult to see what exactly the overall message and idea is. Even within sections, plots can be impossible to follow or make no sense whatsoever. What does remain consistent, however, is Adam’s continuous failure to find a way to live life in the best way possible, and with love as his sole surviving grace. Despite the film’s inconsistencies and sometimes impossible to follow plot, this common thread tenuously holds the whole project together, even if at times, it looks ready to snap.

However, one of the film’s stronger aspects is also likely a result of its twenty year production. The animation is spectacular, with each section being animated in a way to reflect its historical setting. The Roman artwork in particular leaps off the screen and brings the story a life it couldn’t otherwise have. The settings occasionally blend together, but the artwork does an excellent job reminding the viewer of the jumps in settings and the jumps in idea. Unfortunately, in some places, it’s the only real cue that anything has changed or that the viewer needs to focus on a new idea, but this can hardly be blamed on the animation. Indeed, at times, the art and animation provide a way through otherwise unfathomable conflicts and dialogues.

It is this use of different styles of animation to explore historical settings and their lessons that makes the film far more interesting than it otherwise would be. At times, its disjointedness and complex imagery mimic the story being told, even enhancing it by adding colour and light to the sound of confusion. It creates a multi-layered story that thoroughly reflects the complex thoughts and philosophies behind it. As an adaptation of written ideas, this style of animation is perfect, and it is definitely one of the highlights of the film.

Unfortunately, not every aspect is as spectacular as the animation. While the voice acting is excellent (with Borbickzy’s performance being particularly stellar), the music design and use of music is monotonous, repetitive, and – at points – jarring to the point of ruining immersion. The soundtrack is made up entirely of classical music, much of it very recognisable. This means that when Mozart’s “Requiem” plays for the twelfth time in twenty minutes, it has long since lost any power, and has instead been relegated to the same position as elevator music – annoying and only there to distract from everything else. Indeed, the use of music makes everything reminiscent of “Fantasia,” which does not work in this film’s favour. At times, the combination of music and visuals distracts from dialogue and from the ideas themselves, as the combination of the two is more than capable of overpowering the words. This is unfortunate as the film does explore a wide range of philosophical ideas, though quite often, it does so in a muddled and jumbled way that makes very little sense.

“Az Ember Tragédiája” must be respected for the effort it is, and for the way it brings Hungarian literature to life and to a new audience. Parts of it are spectacular, but on the whole, the film feels jumbled and confused, as if even it isn’t entirely sure of what it’s trying to say. While the animation is stellar, the work as a whole feels too long and too confused to be anything but a disappointment.

END_OF_DOCUMENT_TOKEN_TO_BE_REPLACED
Taylor Sinople Picks: The 16 Best Films of 2016
Form and Function in Alex Ross Perry’s “Queen of Earth&...
Digging for Fire and Unexpected: Husband and Wife Process Parenthoo...
Every Thing Will Be Fine 3D Review