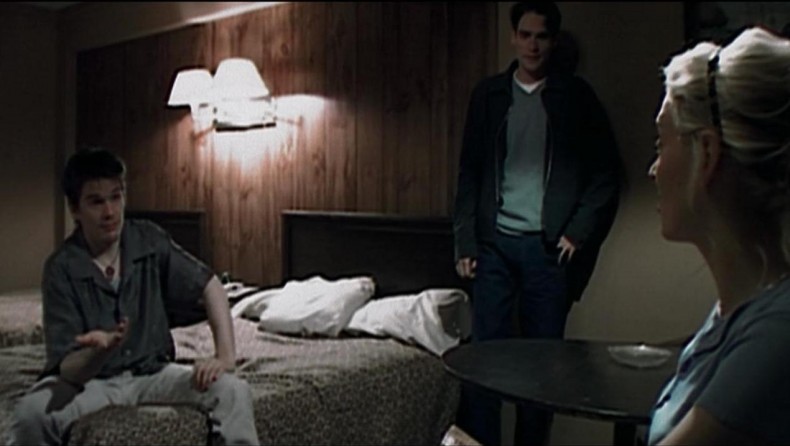 Returning to his low-budgeted roots, Richard Linklater’s “Tape” is a suffocating and voyeuristic approach to a vile cat and mouse game.

I must preface this review with a bit of a caveat. I am a sucker for limited setting films. Something about the inescapable nature of the drama that takes place largely within a single home, apartment, or hotel fascinates me to no end. Alfred Hitchcock’s “Rope,” Mike Nichols’ “Who’s Afraid of Virginia Woolf,” and Michael Haneke’s “Amour” are among not only my favorites of these directors, but in the history of cinema. All of these films show us something different and something we are really not supposed to be seeing. They troll the depths of human emotionality or depravity and do so because they don’t think anyone is watching. And Richard Linklater’s “Tape” is notable for just such a reason.

Made on a very limited budget and confined entirely within a single dreary motel room, “Tape” is filmed entirely on high definition video. It’s a very clever move on behalf of the filmmaker. He doubles down on the intimacy provided by the setting, making it feel like the most intense and competent home movie ever shot. It’s a view into a life most will never and should never be privy to.

Vince (Ethan Hawke) has come to Lansing, Michigan under the guise of supporting his friend Jon (Robert Sean Leonard), who has a documentary being shown at the East Lansing Film Festival. Jon joins Vince in his cramped, utilitarian room with the intent of having dinner together. Having been friends since high school, they remark on their lives, with Vince having just lost his girlfriend and possessing few prospects and Jon appearing articulate and stable. Vince is a volunteer firefighter and part time drug dealer, possessing an immaturity and adolescent outlook often maligned by the seemingly more developed and cultured Jon.

Early on, the characters are rarely centered or even in the same shot. The camera makes us entirely aware of the wall just behind them, insisting on the restrictive locale. But as they smoke a joint together, they both inhabit the frame. This will be the calm before the storm. They are each reclined on adjacent beds and there is a hesitant sense of togetherness, a moment where we see how they may have been great friends so many years ago. But an overhead shots notes the separation between the two, enforcing their current disparity. From here, the topic of conversation turns to an old high school girlfriend of Vince.

They move to a small table and sit across from one another. The staging is evocative of a police interrogation. Vince’s shadow is projected behind him and Jon’s face is sparsely lit in comparison. It borrows a bit from the chiaroscuro of film noir’s past. Vince questions the relationship Jon had with his high school sweetheart, who admits to having sex with her. Further examination reveals that it may not have been consensual.

The supposedly friendly meeting erupts into a battle of wits and wills, with a constantly evolving power dynamic. Upon the revelation that Vince has recorded the entirety of their conversation, he usurps Jon’s authority, culled from a life dedicated to personal and societal development. Vince’s one day of planning negates his lifetime of erratic and degenerate behavior. And though he maintains ambiguity when his motives are questioned, it becomes clear that he is not a moral crusader or purveyor of justice. He is a kicked dog who worms his way to the top of a perceived hierarchy.

“Tape” is first and foremost almost entirely uncomfortable. It is perhaps fitting that the director’s most distressing film be released the same year as his most uplifting, with “Waking Life” opening in theaters less than one month before it. The subject matter is grave, and when the topic of sexual assault is not being addressed, we are privy to the kind of awkward exchanges you would find at a high school reunion. These characteristics reach their peak upon the arrival of Amy (Uma Thurman), the aforementioned love interest, to the motel room. The conversations with her are stilted, though she is initially amicable. In the final thrust, we once again see a massive shift in power and dominance, and an ending laced in ambiguity but narratively satisfying.

All three actors are exceptional, and really this sort of movie lives and dies based on its performances. And it is a further testament to the actors that the restraints of the room do nothing to hamper their commitment and intensity. Ethan Hawke is perhaps the standout among them, but the film’s real star is likely cinematographer Maryse Alberti. He brings a life and energy to the most banal setting. As the camera whips back and forth between two warring parties we become fully immersed in this minuscule world. Combined with excellent blocking, the work is given a realistic and unplanned feel. The viewer is unceremoniously dropped into the lives of these characters and forced to watch them scramble desperately to cast aside the darkness of their pasts.

by Josef Rodriguez on March 15, 2015
Seymour Bernstein is an endlessly fascinating subject, but director Ethan Hawke is ultimately too respectful of his subject to probe any deeper to discover the man that lies beneath his moments of profound insight.

END_OF_DOCUMENT_TOKEN_TO_BE_REPLACED
Taylor Sinople Picks: The 16 Best Films of 2016
Form and Function in Alex Ross Perry’s “Queen of Earth&...
Digging for Fire and Unexpected: Husband and Wife Process Parenthoo...
Every Thing Will Be Fine 3D Review