Features
4
0
previous article
A Fresh Look At: Tape (2001)
next article
Review: Dawn of the Planet of the Apes 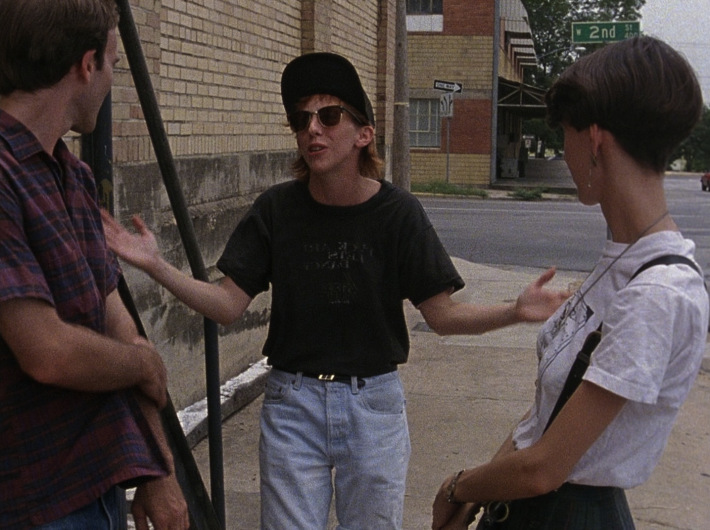 One of the most influential films of the American indie film movement, Richard Linklater's "Slacker" is a generation-defining piece that set the tone for his later, more innovative and philosophical work.

In 1991, a young filmmaker named Richard Linklater took his low-budget feature film “Slacker” to the Sundance Film Festival. It wasn’t technically his first film (that distinction belongs to 1988’s “It’s Impossible to Learn to Plow By Reading Books”), but it was the first of his films that anybody had seen, and it became a sleeper hit at the festival. As more and more people saw the film, it began to gather a cult following, due to its unorthodox structure and cast of bizarre, yet somehow relatable, characters. Over the next two decades, “Slacker” would influence countless independent filmmakers (most notably Kevin Smith, who has credited the film as a direct inspiration for 1994’s “Clerks”), help define a generation that was in need of a voice, and launch the career of one of the most unique and innovative auteurs in modern American cinema.

Depicting an ordinary day in the life of several seemingly random citizens of Austin, Texas, “Slacker” lacks any sort of coherent plot or narrative structure. Instead, the film takes a “fly on the wall” approach: Linklater pulls away from people in the middle of one conversation and drops in on people in the middle of another. Nobody really seems to be doing much of anything, or at least not anything productive; two crimes are committed, guys are working on their cars, a girl is looking through the volumes in a used book shop, a woman tries to sell a Madonna pap smear. But mostly people are just talking: about politics, personal growth, menstrual cycles, art. Linklater himself offers an intriguing monologue on the nature of dreams, and the mind-boggling possibilities of alternate realities. A JFK assassination enthusiast and UFO conspiracy theorist wax poetic on their chosen obsessions. An anarchist bemoans the fact that he never blew up the Texas State Capitol building. Themes of oppression and restlessness dominate their otherwise unrelated conversations, and yet none of the varied cast of characters seems interested in actually taking action to accomplish anything, thus giving “Slacker” its appropriate title.

It seems strange, then, that the film has been willingly accepted as a manifesto of sorts for the counterculture tendencies of “generation X.” The outside eye may interpret “Slacker” as a condemnation or mockery of its subjects, noting with indignation how the characters all seem to have clear ideas of how to better the world, but are too lazy to put any of them into action. In reality, however, Linklater suggests that the “slacker” lifestyle is simply a state of heightened self-awareness; each of the characters, while obviously very different from each other in many ways, share one unifying trait: They are completely independent and take care of themselves in their own way. They assume no responsibility to the establishment that they perceive as oppressive and corrupt because the establishment assumes no responsibility to them. In this way, “Slacker” is a liberating affirmation of the value of independence that is so central to the identity of “generation X.”

Despite its influence as both a seminal work in the American independent film movement and as a cultural commentary, however, “Slacker” is not Linklater’s best film. How could it be? It was his first major work, during which he was just developing the narrative structures and techniques that would define his career. The film has an amateur feel to it – not surprisingly, considering that it was made for a mere $23,000. The energy and lack of experience that made the film an exciting experience in 1991 becomes a fault when compared with Linklater’s more polished work; at one point, a boom mic is clearly visible in the frame for a few seconds. The camerawork, while pulling off eloquent movements to transition between different conversations between characters, is jerky and unstable through much of the film, thanks to lack of Steadicam. The film feels like it was made for very little money because it was.

Moreover, “Slacker” lacks a clear narrative concept. Not to be confused with plot, the film would have benefitted from a stronger central idea pulling all of its eccentric characters together. Some of the vignettes between the characters tie relativity neatly to others, but others seem to come completely out of left field and add little to nothing to the overall theme of the film. The film tends to meander through these less important episodes, leaving the viewer to wonder why they were even included at all.

Perhaps “Slacker”‘s greatest asset, however, is that it serves as an experiment for the ideas and techniques that Linklater would use for some of his later, better films: “Dazed and Confused” (1993) utilized the same ensemble concept while containing a tighter thread that held all of the characters together; “Before Sunrise” (1995) and its subsequent sequels did just the opposite, stripping the no-narrative and all-conversation method down to two core characters. Ten years after “Slacker,” in 2001, Linklater would make “Waking Life,” which used almost the exact same structure, but with more defined philosophical ideas and a definite concept around which the many seemingly unrelated vignettes revolve. With these films, Linklater took ideas that he developed for “Slacker” and perfected them, resulting in some of the best remembered and most critically-acclaimed films of the past 20 years.

“Slacker,” although being his first major film, arguably remains Richard Linklater’s most important to date (although “Boyhood,” being hailed as a masterpiece, may soon claim that title). At the least, it announced the arrival of a fresh and exciting auteur to the American film scene; at most, it helped define both a cinematic movement and an entire generation. No matter which, it cannot be denied that it is a tremendously influential film, even if it doesn’t quite live up to the standard set by Linklater’s best work.

Tyler is an aspiring filmmaker and lover of all things film. When he isn't obsessing over film, Tyler can be found working, taking minimal breaks for nourishment and that oft-desired and seldom-obtained miracle known as sleep. He resides in Columbus, Ohio.
You might also like
Kim KrizanLouis Mackeyrichard linklater

by Williamson Balliet on July 13, 2014
Transferred from live action to animation, Richard Linklater’s “Waking Life” is a novel approach to filmmaking that promotes inquiry amidst its dreamy, episodic structure.
Comments
Leave a reply
Add Comment Register

END_OF_DOCUMENT_TOKEN_TO_BE_REPLACED
Taylor Sinople Picks: The 16 Best Films of 2016
Form and Function in Alex Ross Perry’s “Queen of Earth&...
Digging for Fire and Unexpected: Husband and Wife Process Parenthoo...
Every Thing Will Be Fine 3D Review