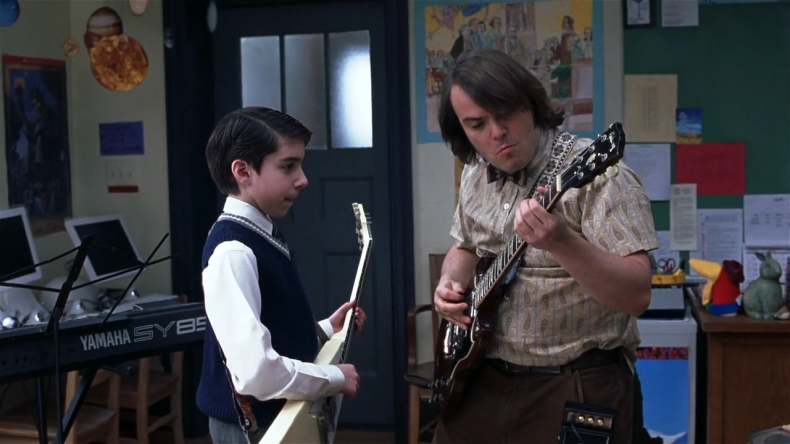 A clear departure from his typical style, Richard Linklater's "School of Rock" is a fun-filled family comedy that offers belly laughs, endless quotes, and genuine heart.

By the turn of the 21st century, director Richard Linklater was already a hero of the American independent film movement. His films, such as “Slacker” (1991), “Dazed and Confused” (1993), “Before Sunrise” (1995), and “Waking Life” (2001), had all gained cult followings and had helped redefine the boundaries of the art of cinema. So it seems unnatural and strange that, in 2003, Linklater would make “School of Rock,” a big-budget (by comparison) “kid’s comedy” starring Jack Black (“High Fidelity,” “Bernie”) and written by “Dawson’s Creek” and “Freaks and Geeks” alum Mike White (Black and White had previously teamed up for 2002’s “Orange County”) about a bunch of kids who start a rock band under the tutelage of a pseudo-substitute teacher.

While it may be true that Black’s Dewey Finn would fit in fine amongst the outcasts and misfits of “Slacker”‘s early-’90s Austin, Texas, “School of Rock” otherwise seems like the exact opposite of everything that Linklater stood for in his early career; in fact, one who didn’t know any better may even have accused the veteran director of “selling out,” one of the most serious charges that can be brought against an independent artist.

And yet despite this departure in style and scale, “School of Rock” has endured as one of Linklater’s most endearing films, delighting teenagers and adults alike for better than ten years. Part of this is because it retains Linklater’s signature charm. The characters are as lovable as Jesse and Celine or Pink and Mitch, and the cast of kids is directed in a way that makes them harmless and edgy, adorable and independent all at the same time. Linklater never intended “School of Rock” to be a “kid’s movie,” and it shows: the kids swear, the music is loud and in-your-face, the humour is biting and dark. Because of this, the film appeals to a wide age range; kids feel like they’re getting away with something by being allowed to watch it, and adults can laugh at the jokes that go over their children’s heads without having to worry about explaining them until they’re a few years older. “School of Rock” is a film that parents and kids can watch together without either getting bored, which is no small feat.

It helps that the film features an ensemble cast that delivers on all levels. It’s obvious that Black’s character was written specifically for him, and he owns the role. Dewey Finn is a lazy, manipulative kidnapper who puts the lives of dozens of children at risk throughout the film, and yet it’s impossible not to love him, criminal activity notwithstanding. Joan Cusack (“Working Girl”, “In & Out”) delivers a knock-out performance as the principal of the kids’ prep school, and Sarah Silverman (“The Sarah Silverman Show”) and White add comedic depth as Finn’s flatmates. But it’s the kids who steal the show, and not only with their musical talent (yes, the kids did play their own instruments in the film). They deliver White’s jokes with spot-on comedic timing and there’s not a bad performance among them. Standing out in particular are Brian Falduto as “band stylist” Billy, who offers two of the most memorable lines in the film, and Robert Tsai as Lawrence, a soft-spoken classical pianist with low self-esteem who becomes the undeniably cool keyboardist of his class’s rock band.

Indeed, the changes that the kids go through over the course of the story prevent “School of Rock” from falling into a tired gimmick and give the film a certain maturity which helps to distinguish it from other “kid comedies.” The film isn’t just about a bunch of kids playing in a rock band, it’s about a bunch of kids learning from the experience of playing in a rock band. Zack (Joey Gaydos, Jr.), the prodigiously talented lead guitar player, learns to stand up for himself and be an independent person. Freddy (Kevin Clark), the drummer, is a textbook ADHD case who learns to focus his manic energy into something productive and worthwhile. Tomika (Maryam Hassan), a backup singer, learns that talent comes in all shapes and sizes and that one’s physical appearance does not determine their worth as a person. All of the kids, in fact, take away some invaluable lesson from the experience, and that’s not even mentioning the general merits of teamwork, hard work, and dedication that are inherent in creating music with a group of people. In this way, “School of Rock” serves as a commentary on the value of music education to children, a theme which is becoming more and more relevant as public schools across the United States continue to cut funding for arts programs in their curriculums. That the film is able to present such a serious theme in such a fun and entertaining way is a true testament to the quality of White’s writing and Linklater’s direction.

“School of Rock” may not be as influential as some of Richard Linklater’s other films (both before and since), but it is a worthy addition to his repertoire, nonetheless. A rare “kid’s film” that appeals to children and adults alike, it has endured for ten years and will continue to do so for many more, thanks to strong performances from an ensemble cast and a script that delivers both laughs and heart. Sandwiched between two of his most experimental films (“Waking Life” and “Before Sunset”), Linklater proves his versatility by making a quality film that will make fans say “Wait… that was him?!” for years to come.

Tyler is an aspiring filmmaker and lover of all things film. When he isn't obsessing over film, Tyler can be found working, taking minimal breaks for nourishment and that oft-desired and seldom-obtained miracle known as sleep. He resides in Columbus, Ohio.
You might also like
jack blackrichard linklaterschool of rock

by Zack Miller on September 7, 2014
Here’s what’s new to Netflix Instant for the week of September 1. Top Picks Good Morning, Vietnam (1987) Directed by Barry Levinson As of late, there has been an understandable increase in discussion about the greatest roles of dearly missed talent Robin Williams. In these conversations, military radio DJ Adrian Cronauer always gets a knowing […]

by Zack Miller on July 27, 2014
Besides an all-time best performance from Jack Black, “Bernie” also boasts many of the hallmarks of director Richard Linklater’s greatest works.
comments
Leave a reply
Add Comment Register

END_OF_DOCUMENT_TOKEN_TO_BE_REPLACED
Taylor Sinople Picks: The 16 Best Films of 2016
Form and Function in Alex Ross Perry’s “Queen of Earth&...
Digging for Fire and Unexpected: Husband and Wife Process Parenthoo...
Every Thing Will Be Fine 3D Review