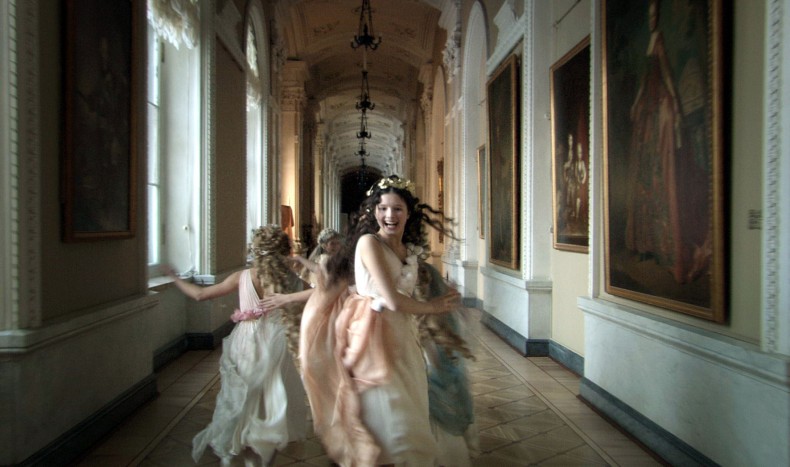 Some films are technical marvels, drawing audiences not necessarily because of their story or characters, but simply because of the spectacle that they are. Films like “Avatar” or “Gravity” might fall into this category – story-wise, they are not terribly unique, but are still marvellous films for what they accomplish with technology and the art of film-making. Other films have spectacular stories or characters or worlds that spring to life, and these films, too, are to be admired. “Russian Ark” is one of those incredibly rare films that brings together both a technical masterpiece and a glorious story in one lovely, perfect bundle.

Perhaps, though, it’s a bit disingenuous to say that “Russian Ark” has a big story. In terms of plot or character development, there is very little. Rather, the audience is treated to an hour and a half of an unseen, unnamed narrator travelling through the Hermitage in St. Petersburg, drifting through time and encountering various historical and non-historical figures. We know very little about him, and indeed, know more about his travelling companion, the “European.” The two of them together, though, are able to lead the audience on a grand tour not only of an architectural and artistic marvel, but also through Russian history and Russian national memory.

What really makes the film stand out, though, is how this is done. “Russian Ark” is done as one continuous shot, with not a single cut anywhere in the film. Setting aside the sheer difficulty of actually accomplishing this, by setting the film in this way, Aleksandr Sukourov allows the audience to become completely immersed in what they’re seeing and what the unseen guide is experiencing. The audience is brought into the Hermitage and brought into Russian history by extension.

It is that exploration of history – and memory, especially – that is interesting. The film covers roughly three hundred years of Russian history, including both the tsars and the Siege of Stalingrad. It doesn’t shy away from showing some of the humanity of these events, including a cannibal driven mad during the siege and the ominousness of the fall of the Romanovs. By the end of the film, there’s a bizarre sense of longing for the tsars and for the history that has long since faded away that both sucks the audience in while leaving them wondering what exactly the film is nostalgic for. However, the final segment is so powerful and poignant that it washes these concerns and questions away, and pulls the audience into the emotion of what’s being portrayed.

While the nature of the film as one man’s exploration of the Hermitage through history can make it slow at times, “Russian Ark” is an absolute masterpiece. It brings the audience into every moment and emotion with ease, creating the fantasy of a Russia long past. It creates a nostalgia for a time that can’t really be considered good or fair, but equally, it doesn’t matter. What matters is that time goes on, and the Hermitage with it.

END_OF_DOCUMENT_TOKEN_TO_BE_REPLACED
Taylor Sinople Picks: The 16 Best Films of 2016
Form and Function in Alex Ross Perry’s “Queen of Earth&...
Digging for Fire and Unexpected: Husband and Wife Process Parenthoo...
Every Thing Will Be Fine 3D Review