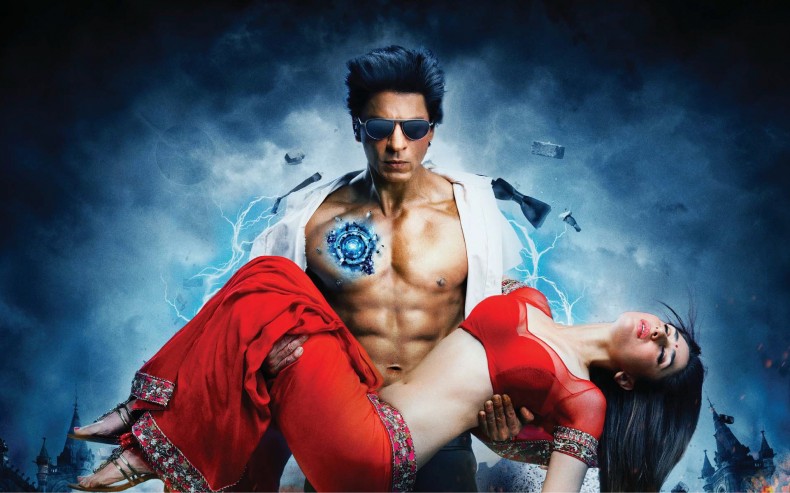 “Ra.One” is a 2011 Indian superhero film about a video game villain that escapes his game and runs rampant in the real world. It follows the adventures – or misadventures – of video game designer Shekhar Subramaniam (Shah Rukh Khan) as he designs a video game with his son’s (Armaan Verma) preference for an unstoppable villain in mind. When the villain – Ra.One (Arjun Rampal) – does escape the son and his mother, Sonia (Kareena Kapoor) find themselves running and hiding from the character with the help of the hero, G.One (Shah Rukh Khan).

This film comes across as being very silly. Though the premise is somewhat interesting, Shekhar largely comes off as a bumbling father figure, trying to please his son without really knowing how or what to do. His actions are buffoonish, yet loveable in an awkward sort of way. When tragedy does inevitably strike, the family’s sadness seems genuine and understandable. Though Shekhar was largely incompetent, the role he played in his family and what he meant to them is communicated effectively, and the scenes of the family coming to terms with his loss are emotional.

However, the light-hearted and silly tone doesn’t work as well outside Shekhar’s character. The emotional and sad moments segue jarringly into chase scenes and upbeat musical numbers, and action scenes suffer a distinct lack of tension due to the bookends of silliness. This would perhaps work if the film came across as wanting to be light-hearted and silly, but it doesn’t. Rather, it feels like a film that very much wanted to tell the story of video game characters and how a family uses them to deal with tragedy. Conversations about the roles of gods and angels in the world only further solidify the idea that this is a film that wanted to discuss serious ideas while being a superhero film, and yet failed at both.

Perhaps the most egregious consequence of this silly attitude is that none of the characters develop or indeed seem to be characterised at all. Sonia, especially, comes across as a highly bipolar character, sometimes being aware of what’s going on around her, sometimes being completely unaware, but mostly being a foil and object for the men around her. The same is true of the son, Prateek, who, after releasing Ra.One, fades back into the oblivion of object-hood, never to be characterised. Indeed, even the main characters, Ra.One and G.One don’t have personalities, instead being objectified themselves as objects that fight each other and perform stunts. This is perhaps excusable given that they are video game characters in a game that revolves around punching things, but equally, if the main focus of the film is to be on these characters, it seems not unreasonable to expect them to have at least a little more characterization than a collection of pixels.

This is the crux of the film. It is largely boring while also being very silly. It’s shot very crisply and clearly, taking no risks with the camera or its shots, and ensuring that every scene proceeds in the safest and most predictable way possible. Despite the large number of fighting and chase scenes, none of them raise any particular tensions because the lack of characterisation and the simplistic shots ensure that the audience has no reason to care, even if they didn’t already know how the fight would end. The plot is brutally simplistic – especially given the potential complexities of the premise – and the fights are standard and boring.

Yet at the same time, the film is fun. The plot for all its simplicities makes no sense and the characters are stupidly boring and inane, but the colours, music, and set designs are so much fun that one can’t help but sit back and start to enjoy it. The songs are catchy, the choreography is good, and the music so heavily overlaid that it begins to make up for the lack of anything interesting happening on the screen itself. Instead, the attention goes to the music and how it tells the story more successfully than the film itself.

Overall, “Ra.One” is uninteresting, but yet still manages to be a fun way to spend two and a half hours. The plot and characters are both contradictory and non-existent, but yet the film’s music more than makes up for them. It’s by no means a good film, but it is a good time.

Janneke Parrish lives in South Korea where she struggles to order pizzas and consoles herself by watching far too many movies.
You might also like
Kareena KapoorShah Rukh Khan

by Janneke Parrish on July 6, 2014
“Agent Vinod” is a 2012 Hindi action film that attempts to capture some of what makes James Bond and the Bourne series great while failing utterly at creating anything compelling or interesting. While one must applaud it for some of its highly unique and ambitious moments, overall, the film is a dismal, uninteresting failure. The […]
Comments
Leave a reply
Add Comment Register

END_OF_DOCUMENT_TOKEN_TO_BE_REPLACED
Taylor Sinople Picks: The 16 Best Films of 2016
Form and Function in Alex Ross Perry’s “Queen of Earth&...
Digging for Fire and Unexpected: Husband and Wife Process Parenthoo...
Every Thing Will Be Fine 3D Review