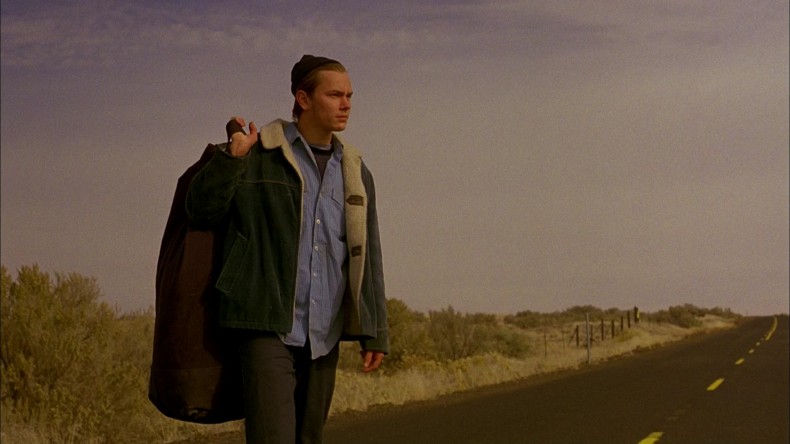 Somewhere between surreal depravity and Renaissance tragedy is Gus Van Sant’s “My Own Private Idaho,” a visually compelling examination of unrequited love - romantic and otherwise.

Musing on a desolate highway in Idaho, Mikey Waters (River Phoenix) convulses and collapses in a narcoleptic fit. The sky passes overhead in time lapse as he dreams of his mother holding him, comforting him before the titles commence. Already, in these first few shots, we are introduced to several tropes that by nearly all accounts should come across as tired cliché or, at the very least, wholly unoriginal. But it is a testament to Gus Van Sant that “My Own Private Idaho” rises above hackneyed tropes, repurposing rote cinematic sequences to breathe new life into the normally trite.

The clouds move quickly overhead not to show the passage of time, but to understand the surreal perception of reality the afflicted Mikey must have.  The soliloquy is not a ham-fisted attempt made by the screenwriter to announce the intentions and motivations of the protagonist, but the beginning of the incorporation of Shakespearian themes and characters. His mother’s comfort is not simply refuge sought by the beleaguered, but a desperate plea for the unobtainable, something only able to be captured in the dreams that hauntingly serve as a plague themselves. And with this beginning we are quickly presented a world not defined by our own rules but by the near constant hypnagogic state of gay hustler Mikey Waters.

The central conceit of the plot mirrors that of Shakespeare’s Henry IV, though set contemporaneously with its 1991 release, with Scott Favor (Keanu Reeves) playing the Prince Hal to Mikey’s Poins, though the context and nature of their relationship is much more complicated. They are both hustlers, roaming Seattle’s back alleys turning tricks, Mikey to survive and Scott to buck familial expectations. Scott’s father is exceptionally affluent and hopes for his heir to withdraw from youthful folly to pursue whatever business brought about such profit. Through their carousing and travels, Mikey grows to love Scott, the latter of whom believes that two men cannot truly love each other and insists that his prostitution is merely a means to an end, un-indicative of his nature. Refreshingly, Mikey’s sexuality is not his defining characteristic. In many ways, Scott’s homophobia is more burdensome than Waters’ identity, having to defend his heterosexuality from the assumptions his trade inevitably attracts.

There is little concern for small details and contrivances, at least in terms of its narrative, and this lack of definition reinforces a detachment brought about by a unique color palette and atypical shooting style.  So much of this film is bathed in an orange hue with many costumes and sets similarly styled. It is unnatural and artificial, removed from normative design and thus a draw for the eye. Throughout the movie, perspective is shifted often, moving the pot before ever reaching a boil. Even when the characters are confined to close quarters, Van Sant finds a way to remove intimacy. He shoots two sex scenes as though they were a series of photographs and a declaration of love is made awkwardly, with a wall of tension between the two. But these efforts are not in vain. The entirety of the mise-en-scène becomes a reflection of Mikey’s skewed reality. The plane in which he exists is slightly dissimilar to our own, disassociated from time and people through his disease and ever-fracturing persona. And it is fitting that there is no real resolution for him. His struggle is constant and amorphous, with new wounds opening before the old have time heal in the first place.

And though we follow a chaotic and tumultuous protagonist, this is a story of destinations, not journeys. Though the characters cover vast expanses of land and sea, the trips are almost never shown. Stark locational titles, with only a single one-word against a bold monochromatic background, insist on this point. It further separates the audience from the diegetic world and, along with the very affected staging, also serves the running theme of theatricality.

When I first saw “My Own Private Idaho” on April 16th 2006 (I wrote down the date in a book I own for such purposes) I was in awe. My sixteen-year-old self believed this to be one of the finest contemporary cinematic works, possessing extraordinary depth and an avant-garde style, but I had not returned to the film until just this week. And while some of my initial praise is due reverence, I could no longer be swept away in the frequent histrionics that become the movie’s only real scourge. In an attempt to capture the style of Shakespeare’s works, the acting often adopts an overly dramatic sensibility, fueled by sweeping physical gestures and bombastic diatribes. It wanders into a strange, cartoonish place thematically. The leader of the denizens and the Falstaff of the narrative, Bob Pigeon (William Richert) is the main perpetrator of this fancy, and lacks the charm and charisma of Falstaffs past. This is typically a character that emits a near constant wit that even overwhelms his debauched hedonism, enough so that when rebuked by Henry V, there is a very real and painful sadness.  Here, the slighting of Bob does not carry enough weight. He is purely ancillary and defined more by his sleaze than his jocularity.

This blemish aside, “My Own Private Idaho” remains one of Van Sant’s finer works.  Specifically, the character of Mikey Waters is a testament to his screenplay and the phenomenal performance of River Phoenix, who is able to bring a believable naïveté to a character that should be severely more hardened to concepts of love. He was very involved with the formation of his character, re-writing his profession of love to Scott, removing all ambiguity in his orientation.  In turn, his performance was widely lauded, with praise heaped upon him even in reviews critical of the work as a whole and eventually garnering awards from the Venice Film Festival, Independent Spirits, and National Society of Film Critics. And though the performances are occasionally brimming with hyperbole, the visual complexity creates a richly layered dreamlike state that makes the terrifying world of Mikey palatable, but never glamorous.

by Taylor Sinople on April 15, 2013
Gus Van Sant’s latest film of controversy is Promised Land: a finely acted, authentically told drama about a big-game natural gas company rep that returns to his small-town roots to lease land from farmers for drilling. The process is specifically called “fracking” – the fracturing of subterranean rock layers to retrieve fossil fuels. Fracking has […]
comments
Leave a reply
Add Comment Register

END_OF_DOCUMENT_TOKEN_TO_BE_REPLACED
Taylor Sinople Picks: The 16 Best Films of 2016
Form and Function in Alex Ross Perry’s “Queen of Earth&...
Digging for Fire and Unexpected: Husband and Wife Process Parenthoo...
Every Thing Will Be Fine 3D Review