Reviews
1
1
previous article
Review: Wild
next article
Bonding with Bond: The Man with the Golden Gun (1974) 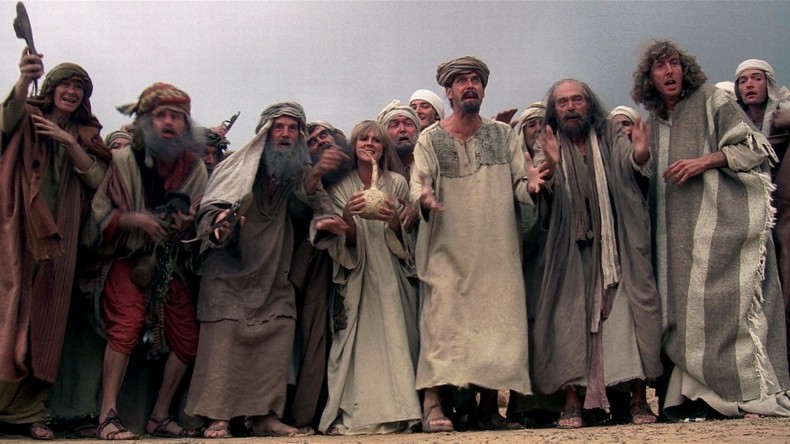 Monty Python's irreverent humor and sweeping visuals allow "Life of Brian" to transcend the time in which it was made, and secure its position as an enduring and poignant satire of religion and individualism.

Monty Python’s not-so-biblical epic, “Life of Brian,” turns 35 this year and its themes of independent thinking and skepticism are still very relevant. Their follow up feature to the wildly successful, and, for all intents and purposes, canonized “Monty Python and the Holy Grail” was much more harshly received, and labeled “blasphemous” by several factions of the Catholic Church and the Church of England. Though it may be controversial, “Life of Brian” is an impressive achievement in filmmaking, and one that got the “epic” dead on.

As with “Holy Grail,” “Life of Brian” derives its story, and indeed its humor, from placing everyday, relatable characters into historical situations. “Life of Brian” centers on what its title implies, the life – from birth till death – of Brain. Born mere yards from Jesus Christ, Brian is mistaken (the first time of many) for the messiah himself by the famous “three kings.” His childhood is glossed over in the beautifully animated opening titles (by Terry Gilliam, who is responsible for all Monty Python titles and inter-titles), and we catch up with Brian as he listens from the back row at Christ’s famous Sermon on the Mount. Panning slowly backwards to introduce a sense of scale, director Terry Jones shows an enormous crowd gathered to hear Christ speak. Finally reaching Brian (Graham Chapman) and his mother (Terry Jones), Christ is hardly audible, and fellow members of the crowd become agitated at not being able to hear. Making up their own versions of the speech (“Blessed are the cheese makers?”), the Pythons set up their film-long joke: people’s individual interpretations are silly. As we continue to follow Brian and his life, we never see Christ again, yet Brian himself becomes a figurehead of both a faction of Jewish freedom fighters, The People’s Front of Judea, and a newly formed gourd/sandal-based religion.

Unlike with “Holy Grail,” Terry Jones has completely taken over the director’s chair, and Terry Gilliam stepped aside for a turn at production design. Their separation greatly assists in the congruity of “Life of Brian” as there are not two different styles of direction in contrast to one another. Able to focus more fully on the performance and narrative, Jones is able to keep “Life of Brian” away from the Pythons’ predisposition to disconnected stream-of-consciousness comedy, and Gilliam’s tendency to focus on visual grandeur. Gilliam took charge (apart from brief appearances as some highly bizarre characters) of the look of he film, and capturing the magnificence of Tunisia. An amicable separation, Jones was more suited to “direct” (equal members, the Pythons were reportedly impossible to control) his fellow Monty Python members, and Gilliam, evinced by his work on his own films, was free to explore the realm of production design and imagery. Apart from infrequent lighting incongruities where the transitions are evident, Jones and cinematographer Peter Biziou typically blend the London studio and Tunisian location shots seamlessly; lending a spectacular realism to the otherwise irreverent picture.

It is from this realism that Jones and Gilliam derive a majority of the comedy in the film. By placing their modern characters within the constraints of an authentic historical epic, the Pythons are able to achieve countless more hard-earned laughs. In working to ensure the film looks like a serious period epic, The Pythons remove their comedy stylings from poorly constructed (infinitely cheaper/easier) cardboard sets to millennia-old historical ruins. Because it looks more real, the characters gain historical credibility, yet retain modern relatability through their interactions and contemporary social concerns. A recurring film-length joke, the rivalry between the People’s Front of Judea (PFJ) and the Judean People’s Front (the splitters) is a brilliant satire of the contemptuous relationship between various leftist factions of contemporary (1979) British society. Skewing historical accuracy in their favor, Monty Python’s take on the cliché “air duct heist” is re-arranged wherein the marauders infiltrating the sub-floor heating chambers of Pontius Pilate’s palace. Not only are they “Pythoning” around during a heist, they are bumbling around in ductwork like their more modern counterparts.

Working within the confines of the historical period in which the film is based, the Pythons make a complete mockery of every day culture and interaction. Whether it is at a sparsely attended children’s matinee gladiator battle, or the exclusion of women at a stoning, the Pythons work, in earnest, to put themselves in the place of their ancient counterparts. Struggling to find his way through life, Brian must work against a government that he hates (the Romans) and to win the heart of the girl he loves, Judith (played by Sue Jones-Davies). Achieving each of his distinct goals in spectacular fashion, Brian is met with near-constant, Pythonesque, divergences from his desired path. A cornerstone event of the film is Brian’s graffiti-ing of a Roman temple. In an act of defiance, Brian endeavors to paint “Romans go home” in a public space. Caught in the act, Brian is schooled by Roman guard – and schoolteacher analogue – John Cleese (an ex-Latin teacher), in the proper Latin conjugations, and ordered to repeat the task 100 times before sunrise (Gilliam would use his artistic abilities and a large piece of acrylic to accomplish Brian’s feat of protest). Not only has Brian succeeded, and far exceeded, in his intentions, but the introduction of Cleese’s “average Englishman” to the narrative brings hilarity and accessibility to the film.

Upon its release, “Life of Brian” was widely regarded as blasphemous by many religious factions of society. Monty Python has vehemently argued against this label, due to Christ’s two depictions in the film being respectful and biblically accurate. Much preferring the title “heretical,” the Pythons designed the film to be a staunch criticism of the basis of religion. Condemning “group think” and the fallacy of accurately interpreting ancient documents, “Life of Brian” is much more damning of religion as a whole than any religious figure. Taking their idea of incorrect perceptions to its (il)logical conclusion, Brian is deemed the Messiah, and small acts such as losing his sandal are praised as “foundations of his teachings.” Monty Python is not simply castigating religious beliefs, they are taking the comedic approach to informing the masses that the opinions held by priests, rabbis, and preachers do not make them any more important or genuine than personal, introspective conclusions on morality and life.

A testament to Monty Python’s dynamic ability to position flippant humor in one of the most serious historical periods, while staying, aesthetically, as true-to-period as possible, “Life of Brian” is an astounding achievement in comedy filmmaking. With sweeping shots of the Tunisian landscape, and jam packed with poignant, irreverent jokes, Monty Python’s incredible “Life of Brian” withstands the test of time; every bit as contemporary and relevant three-and-a-half decades on.

Jordan Brooks is a contributor to several online publications, including his own blog focusing on streaming film. Being an avid lover of film, he has recently begun diving more deeply into film history; and is working towards becoming more educated in world cinema. He currently resides in sunny California with his girlfriend and their dog (although the real film buff in the family is definitely the dog).
You might also like
Life of BrianMichael Palinmonty pythonTerry Gilliam

by Jess Brooman on June 9, 2014
Over the years, British cinema has certainly been influential in terms of both style and substance. At their best, British films are masterpieces of the big screen. From the realities of David Lean films, to the raw humanity of Ken Loach and Carol Reed, via the ingenious comedy of the Monty Python series and Ealing […]
comments
Leave a reply
Add Comment Register

END_OF_DOCUMENT_TOKEN_TO_BE_REPLACED
Taylor Sinople Picks: The 16 Best Films of 2016
Form and Function in Alex Ross Perry’s “Queen of Earth&...
Digging for Fire and Unexpected: Husband and Wife Process Parenthoo...
Every Thing Will Be Fine 3D Review