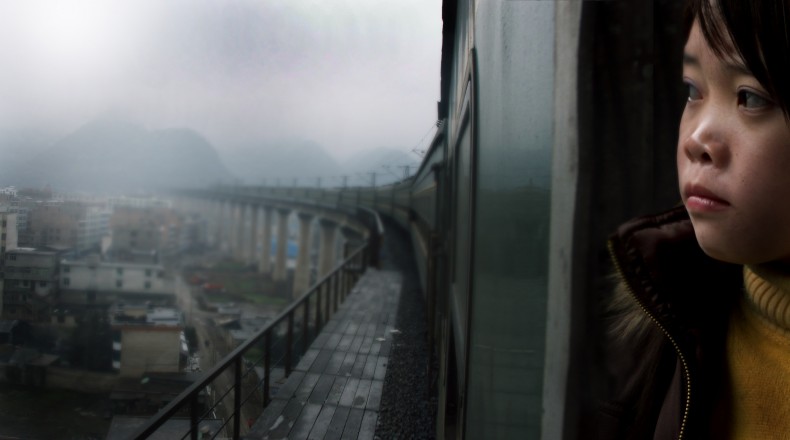 “Last Train Home” follows a family of Chinese factory workers, documenting both their everyday lives and their struggle to get home again to see their family at Chinese New Year. The story is a sad one, but one that is repeated by other families across China, as the shots of crowds of millions shoving their way towards trains emphasises.

Images are shown and allowed to speak for themselves. The parents’ sparse and dreary room that can’t properly be called a home says more than a narrator or text ever could about the lives of these workers. Equally, showing the daughter’s room with her friends and their perspective of factory work as an adventure more than anything else is effective and shows how appealing sacrificing education and becoming a factory worker can be.

What is more interesting, however, is the ethical question this documentary raises. Obviously documentaries, as much as they try to be so, are not organic. They revolve around following their subjects around with a camera, trying to get an idea of their lives. This act of following is an obtrusive one, and perhaps might even have the effect of changing their behaviour as the subject feels a need to be more interesting. “Last Train Home” uses standard documentary techniques throughout, having, for instance, the parents reconstruct or stage conversations for the benefit of the audience. The use of these techniques breaks the illusion of authenticity, but equally, one can’t fault the film for trying to ensure its audience understands what is happening.

On its own, there is nothing specifically wrong with this scene. It reveals the high emotional tension surrounding factory work in a very powerful way. The trouble with the scene is that it offers a glimpse of the conversation the film crew had with the daughter – and likely everyone involved – to create the film. They asked to see the “real” her. Considering at the beginning of the film, the daughter was lamenting how the countryside didn’t allow her to be herself, and how her education was stifling her, the question of what effect the presence of a documentary crew had on her life must be raised. It seems not impossible that the very fact that there was someone interested in following her may have pushed the daughter to drop out of school and go into the city, where she felt she could better “be herself.”

Questions like these always surround these sorts of documentaries. As much as filmmakers try to present authenticity, the presence of a camera changes things and events. Even if the subjects get used to being filmed, their actions still might change depending on what the filmmakers want and how they ask for it. In many cases, these changes might be something minor, but in “Last Train Home,” it’s possible that the presence of a camera convinced a teenager to drop out of school and become a factory worker, changing her life in a drastic and permanent way.

As beautiful and poignant as “Last Train Home” is, the ethical issues around it must be considered. It’s a film that states in the credits that it is opposed to the exploitation it sees as inherent in the factory and migration system in China, but which also could be said to exploit its subjects in the name of telling a broader story about labour rights in China. It raises interesting questions, though it’s likely that they are not the questions it intended to ask. However, documentaries, what they are, and the effect they have on their subjects must be considered, and “Last Train Home,” if it does nothing else, points out exactly the harm that a camera can do.

(All Features), Features, Issue #14, Retrospectives
About the Author
Janneke Parrish

Janneke Parrish lives in South Korea where she struggles to order pizzas and consoles herself by watching far too many movies.
comments
Leave a reply
Add Comment Register

END_OF_DOCUMENT_TOKEN_TO_BE_REPLACED
Taylor Sinople Picks: The 16 Best Films of 2016
Form and Function in Alex Ross Perry’s “Queen of Earth&...
Digging for Fire and Unexpected: Husband and Wife Process Parenthoo...
Every Thing Will Be Fine 3D Review