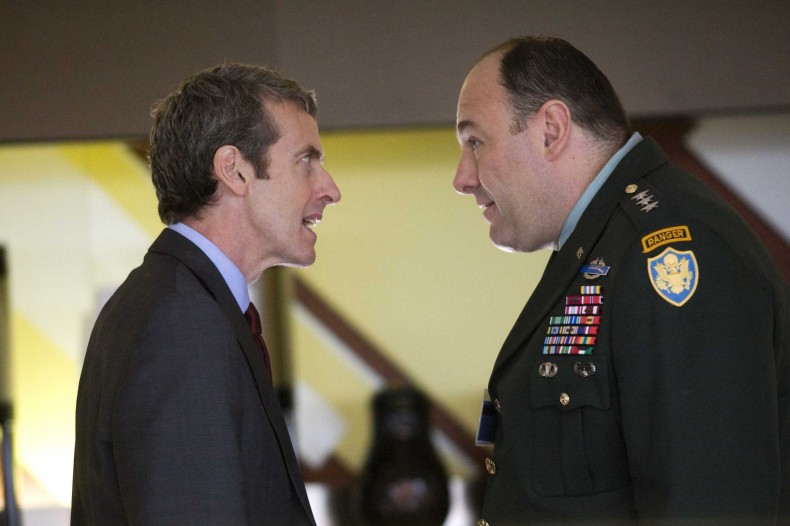 It’s hard to be in the loop with "In the Loop," but once you arrive, it’s fantastic.

In the Loop is a 2009 British comedy film based on a television series of the same name. While the show focuses on various aspects of British political culture, the film looks at a specific instance in which the UK considers going to war. It follows the politicians and civil servants involved in the process, and mocks both these politicians and the process itself.

It is, in many ways, a very British film. The humour is largely situational, and there are very few moments that are blatantly funny. However, the utter absurdity of everything on the screen is more than enough to keep the audience entertained throughout the film, even if the jokes aren’t always entirely clear. That said, when they are clear, the jokes are sharp, witty, and highly enjoyable.

The characters, too, contribute to this humour. Characters like Malcolm Tucker (Peter Capaldi) promise hilarity every time they’re on screen, even if they themselves don’t necessarily know it. Capaldi’s foul-mouthed Scottish civil servant is so absurd that one can’t help but find him absolutely hilarious, even as he swears continuously at everyone and anyone. Even the more serious characters like Simon Foster (Tom Hollander) and Karen Clark (Mimi Kennedy) are often hilarious in their ineptitude or bafflement. While the humour relies on the plot of wanting to go to war, this serves only to heighten the absurdity, and therefore, the humour.

However, there are most definitely aspects to criticise as well. While the may claim to be “in the loop,” an audience who is unfamiliar with the television show will be at an absolute lost for much of the beginning of the film. Some things are assumed to be known, such as what Malcolm Tucker’s position is and why he’s able to abuse civil servants so thoroughly. Equally, the haphazard and slapdash way in which the plot and characters are introduced makes it sometimes difficult to follow the plot and what exactly is going on.

What’s perhaps the most interesting choice on the part of the filmmakers, however, is the choice to make this a documentary-style film. Its angles and techniques are highly reminiscent of other documentary-style films, such as Bob Roberts, though no explanation is ever really given for this. While it’s understood that documentary-style doesn’t necessarily entail a literal documentary crew tailing the characters, it does imply a certain amount of familiarity between those filming and the characters themselves. It invokes the image of reality, and therefore must play more by the rules of reality. The documentary-style is jarring when coupled with things like secret UN votes and meetings in minister’s hotel rooms. It doesn’t fit with the story. Indeed, at times, the lack of music and such feels entirely jarring. While it is shot documentary-style, it doesn’t feel like a documentary, and so silence from a lack of music can feel entirely wrong.

Ultimately, however, In the Loop is a successful comedy. It makes the audience laugh, even if sometimes that laughter is confused and tentative. The question of whether it’s appropriate to laugh at countries declaring war hangs over the film, but in its own way, this only makes the film funnier. The characters are good, the wit is sharp, and while it can’t necessarily be described as a “fun” film, it is certainly an enjoyable one.

Janneke Parrish lives in South Korea where she struggles to order pizzas and consoles herself by watching far too many movies.
You might also like
James Gandolfinipeter capaldiTom Hollander

by Taylor Sinople on September 14, 2014
Editor’s note: Our “Double Exposure” reviews pit two or more critics against one another on the same film to hash out their differences in opinion. Agree with what we have to say or want to offer your own take? Leave it in the comments below. The Rundown Taylor Sinople Final Rating: 7 out of 10 Bottom […]
Comments
Leave a reply
Add Comment Register

END_OF_DOCUMENT_TOKEN_TO_BE_REPLACED
Taylor Sinople Picks: The 16 Best Films of 2016
Form and Function in Alex Ross Perry’s “Queen of Earth&...
Digging for Fire and Unexpected: Husband and Wife Process Parenthoo...
Every Thing Will Be Fine 3D Review