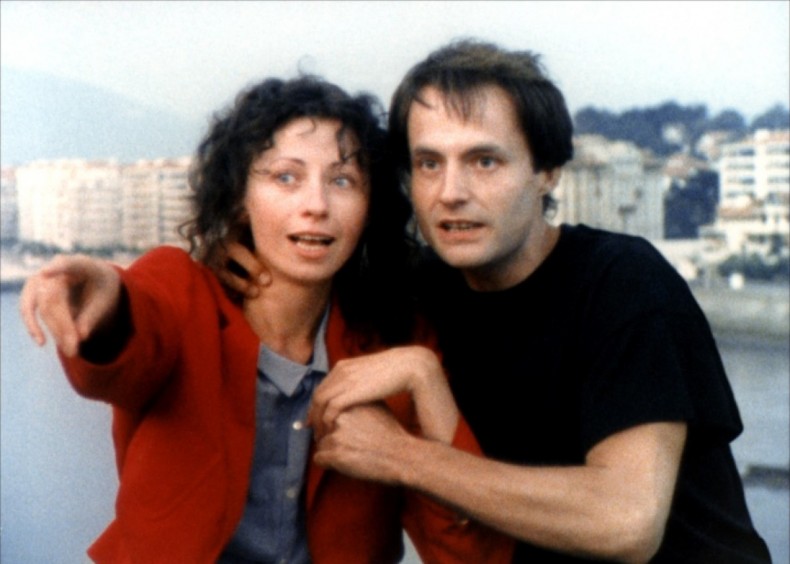 Rohmer’s Golden Lion winning film is the pinnacle of the director’s personal style, a quietly profound travelogue dedicated to anyone who has struggled with the immense pressure to make something of this life.

“I don’t feel at ease with older people… I can’t get people older than forty to talk convincingly.” This was the response given by Eric Rohmer when questioned as to why his films focused on young people. Rohmer, who passed away in 2010, is the subject of a retrospective at the British Film Institute this month with a handful of his films being rereleased to the big screen, newly remastered. It is not just young people who feature in Rohmer’s films, however, but places that feature young people. A beach, a café, or a studio apartment can reveal the trends and opportunities of the day à la Pauline at the Beach (1983) but they can also carry a vast, despairing loneliness. Such is the case for Rohmer’s sublime fifth entry in his Comedies and Proverbs series, the 1986 film The Green Ray.

The film follows Delphine, a twenty-something Parisian performed by Marie Rivière with quiet desperation, who finds herself alone for the holidays when her friend ditches their plans. This abandonment brings about a profound and deep-set melancholia within her, and her search for a vacation suddenly becomes a hugely personal attempt to set her life back on track after the disintegration of her relationship. Friends — and friends-of-friends — offer life advice to little effect as Delphine breaks down time and time again without being prompted by cause. Her only idea is to travel, restlessly, from one destination to the next looking for the solution to her own resistance.

The Green Ray gently ponders the philosophy of universal loneliness, but it also serves as an enlightening look into contemporary, metropolitan life of eighties France and Europe. It feels like another world, though: a time before selfies and constant digital companionship, when being alone meant alone; a time when traveling was an excursion for private thought or a recess for a wounded soul, not a symbol of status and social media bragging rights. During dinner with friends, Delphine stutters her way through explaining her vegetarianism, a movement whose popularity soared dramatically during the decade prompting similar dinner party discussions across the UK and America. Rohmer’s long takes and improvised dialogue will surely resonate with anyone who has ever struggled with expressing a passion or lifestyle choice and masterfully illustrates Delphine’s own discontent.

She is a difficult person, who knows only what she does not want to do. Her deep-seated melancholia frequently reduces her to tears or, when it all gets too much, she runs away. Kierkegaard once remarked that people constantly mistake “pride what was intended only to protect the secret of my melancholy.” Like him, Delphine resists the customs of her world in order to find where she belongs in it. This is best illustrated through her interactions with a Swedish girl, Lena, whom she meets at the beach. Lena is Delphine’s physical and spiritual opposite. She finds travelling alone liberating, not depressing, and enjoys the pointless chitchat with idle strangers. The scenario concocted by her spontaneity comes to an end when Delphine, overwhelmed, runs back to her solitude.

For Delphine to find her place in this world she must choose to find meaning. Rohmer delighted in coincidence, the magic of the everyday; a green playing card found in the street or an overheard discussion by the seaside. These moments may seem irrelevant to those she constantly backs away from, but they carry a personal significance for Delphine. Rohmer highlights this for us with a rare break in convention, a fleeting moment of soundtrack, something which he believed broke immersion. Here, however, it serves as an indication of the “secular miracle” (as Tony McKibbin coined it in his essay Following the Law of One’s Own Being: The Crying Woman in The Green Ray) that Delphine is looking for. The so-called green ray is one such miracle. The Jules Verne novel of the same name is at one point discussed at length by a group of pensioners and Delphine becomes aware of the meteorological phenomenon (the splitting of the last sunlight against the horizon provides a green tint against the sky) that allegedly allows one to get in touch with their soul. Rohmer hints at this miracle by dabbing the warm greys of Paris and yellow beaches with hints of green, in the background of the landscape or in the clothes of the people.

As her holiday draws to a close, she reluctantly opens herself up to a man at the train station and, as she does, resigns her resistance to life and is permitted to see her green ray. Rohmer offers no conclusions; this is a film based on, as he would say, “the most ordinary things of life.” As such, character arcs are private things, even passing by the person themselves. If the mythical green ray leases momentary access to our souls, then the same could be said for Rohmer’s film.

END_OF_DOCUMENT_TOKEN_TO_BE_REPLACED
Taylor Sinople Picks: The 16 Best Films of 2016
Form and Function in Alex Ross Perry’s “Queen of Earth&...
Digging for Fire and Unexpected: Husband and Wife Process Parenthoo...
Every Thing Will Be Fine 3D Review