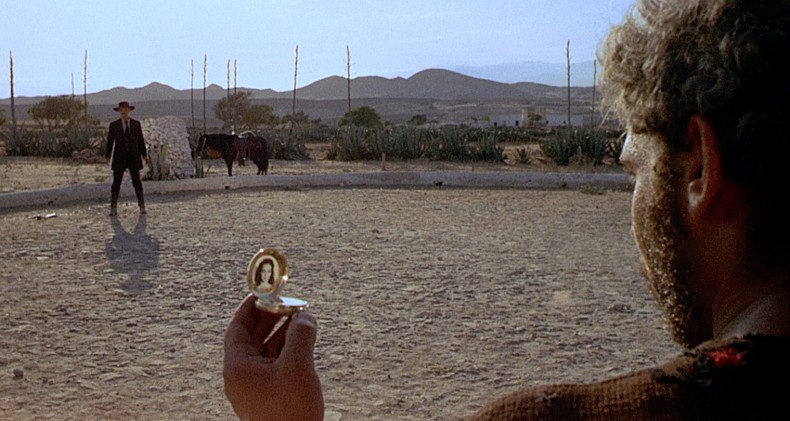 While its existence is due to a dispute between Sergio Leone and Jolly Film (the producers of A Fistful of Dollars), For a Few Dollars More is a shining example of the Spaghetti Western genre, and the under-appreciated gem at the center of the “Dollars/Man With No Name” trilogy. Filmed in concert with Ennio Morricone’s impassioned, atmospheric score, and utilizing Leone’s trademark contrasting of deep focus and extreme close-up, For a Few Dollars More is a vastly expressive yet meticulously considered Western.

“Where life had no value, death, sometimes, had its price. That is why the bounty killers appeared.” This simple phrase, carved in white text over a blood red background, is an ominous and perfectly concise set-up for Leone’s film. We meet our first bounty killer on a train, while stoically reading a Bible. Dressed all in black, Colonel Douglas Mortimer (Lee Van Cleef) is headed to Tucumcari to cash in on a $1000 bounty on Guy Calloway. Easily dispatching the bandit with an incredible display of long-range accuracy, Mortimer quickly collects his reward. Lining up his next target, Red “Baby” Cavanagh, Mortimer is informed that another bounty killer by the name of Monco (Manco is Spanish for “one-handed”) has already inquired about the bounty. Signaled by Morricone’s score, Leone cuts to a close up of our “unnamed” hero (Clint Eastwood) about to collect his own bounty. Monco easily dispatches of Cavanagh and several of his cohorts before trading the bodies in for cold, hard, cash. Introduced alongside our two protagonists is an outlaw by the name of El Indio (Gian Maria Volontè). Recently broken out of prison by his gang of mercenaries, El Indio’s reputation and recent crimes earn him a $10,000 bounty. Mortimer and Monco slowly become aware of each other’s presence as they each seek to make the kill of a lifetime. Although hesitantly, the two men join forces to take down El Indio and his men, vowing to split the enormous sum commanded by such ruthless killers.

Second only to John Ford, Sergio Leone is a master of the Western. Working primarily with Italian actors, crew, and sets (For a Few Dollars More was shot primarily in the Spanish desert), Leone would shoot his film without sound, and have voice actors dub the film to his specified language. For A Few Dollars More, Eastwood, Van Cleef, and Volontè (Volontè spoke no English and used a translator for his recordings) dubbed their own parts, with various other American voice actors rounding out the cast. When Eastwood was asked to partake in For a Few Dollars More, he had not yet seen the finished version of A Fistful of Dollars, so an Italian copy was rush-delivered. Screening it with a group of friends, Eastwood was astounded by how much of the film came through despite the language barrier, and signed on to work with Leone a second time. This anecdote is a perfect summation of Leone’s brilliance. Precisely staged shots, seething with tension tell a more-complete story than heavy-handed exposition or dialogue could ever effectively achieve. Even devoid of sound, Leone’s signature close-up (from the brim of the hat to the chin), captured in a huge 2.35:1 aspect ratio, intercut with an action shot or close ups, provides an extensive boost in tension, and succinctly conveys the desired emotions. When coupled with Ennio Morricone’s symphonic score, Leone is unstoppable.

Meeting as schoolboys, Morricone and Leone had a prolific film career together spanning decades. The preeminent composer of Western scores, Morricone’s work has had an indelible effect on the genre and cinema as a whole. Composing alongside the film’s production, Morricone took cues from Leone’s scripts and intended “look” to match his score perfectly. Because Leone shot without sound, he would often play the pre-composed score via loudspeakers while filming, to allow his actors to further immerse themselves in the film. Based around the sound of a prized locket owned by El Indio, Morricone’s score channels nearly as much emotion as Leone’s images. Swaying between menacing and dulcet, Morricone’s music can stop and start action in an instant, and single-handedly build incredible tension. A twanging spring added to a cut imparts a sense of wry humor to the relationship between Mortimer and Monco, while a booming organ signifies the brutal sociopathy lurking behind El Indio’s pain-filled eyes.

Leone’s sense of scale is exacting in its presentation on film – effortlessly lending itself to the mood of any given scene. Filmed in the Spanish desert, Leone wastes not one millimeter of frame when composing his minutely detailed shots. Choosing to break up his shots (and breaking some cardinal rules of American Western filmmaking) Leone often places his shooters and victims in the same shot, both in focus, imparting a sense of urgency and claustrophobia onto his audience. Seeing the fluid motion of the draw, cock, and shot in one, uncut, frame exposes the enormity of the situation; cause and effect are clearly shown without unnecessary editing. Juxtaposing shots of our heroes in close up with wide shots of the expansive desert, hat brims and the horizon dividing the frames, draws comparisons between the vast unknown, and the unforgiving brutality the desert and the men that call it home.

While Clint Eastwood has recently been at the forefront of movie news, his performance in For a Few Dollars More is infinitely more praiseworthy, and elegantly subdued in comparison to his directorial work. Eastwood’s raw intensity as he stares menacingly into the camera is compelling yet frightening, and certainly one of the reasons the Dollars Trilogy launched him into international stardom. Van Cleef, who was not Leone’s first choice, was propelled to prominence with his portrayal of Col. Mortimer, an age-hardened killer, seething with unrequited hatred for some unknown specter of his past. Slow and meditative in his actions, Van Cleef passes seasoned wisdom to Mortimer, giving him a quietly relentless penchant for bounty killing. Volontè’s El Indio is perhaps the most disturbing villain in any Leone Western. Guilty of unfathomable savagery, Volontè seems moved only by his musical pocket watch, and even then, only for a moment, switching instantly back into his distantly cold sociopathy.

50 years after its production, For a Few Dollars More is still every bit as impactful and tensely thrilling as the day it was made. With an incredible score that is still being sampled (mostly by Quentin Tarantino), and a lead actor that has made his own transition into directing, For a Few Dollars More has left a permanent mark on the cinematic landscape. Reminding us of how powerful a director’s influence can be on storytelling; Leone’s skill behind the camera is a perfect example of Hitchcockian “Pure Cinema,” that many modern directors would be well suited in following.

Jordan Brooks is a contributor to several online publications, including his own blog focusing on streaming film. Being an avid lover of film, he has recently begun diving more deeply into film history; and is working towards becoming more educated in world cinema. He currently resides in sunny California with his girlfriend and their dog (although the real film buff in the family is definitely the dog).
You might also like
clint eastwood

by Zack Miller on September 7, 2014
Here’s what’s new to Netflix Instant for the week of September 1. Top Picks Good Morning, Vietnam (1987) Directed by Barry Levinson As of late, there has been an understandable increase in discussion about the greatest roles of dearly missed talent Robin Williams. In these conversations, military radio DJ Adrian Cronauer always gets a knowing […]

by Josef Rodriguez on June 22, 2014
Although "Jersey Boys" suffers from a refusal to deepen its exposé on The Four Seasons, the film coasts for almost two and a half hours on exciting performances from its four leads and a soundtrack of classic hits.
Comments
Leave a reply
Add Comment Register

END_OF_DOCUMENT_TOKEN_TO_BE_REPLACED
Taylor Sinople Picks: The 16 Best Films of 2016
Form and Function in Alex Ross Perry’s “Queen of Earth&...
Digging for Fire and Unexpected: Husband and Wife Process Parenthoo...
Every Thing Will Be Fine 3D Review