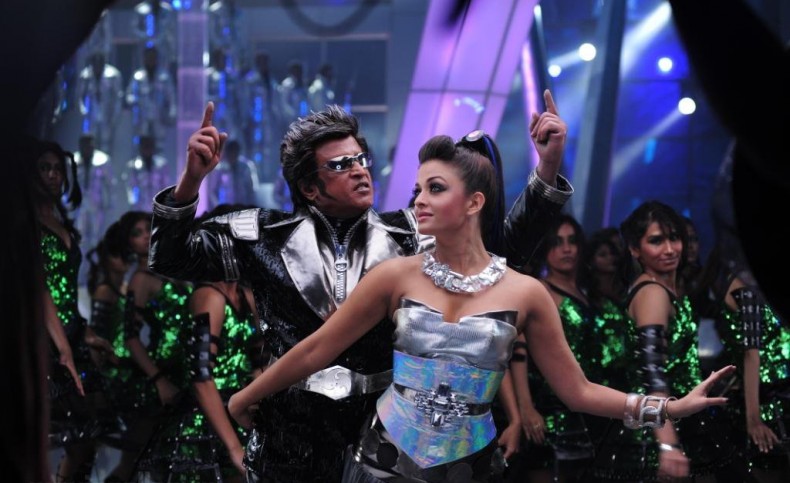 “Enthiran” is a 2010 Tamil film about a robot named Chitti who is brought to life and tries to find a place for himself in a world of humans. Though it sounds very much like a stereotypical Pinocchio-style story – and is, in many ways – the film also offers more than this standard plot thread of being accepted and finding value in life. Instead, the film winds a long path through numerous questions, including the relationship between scientific progress and tradition, and what being human actually means. It’s also filled with action and all the traditional hallmarks of Indian film, such as elaborate dance numbers, damsels in distress, and larger than life heroes.

The plot is fairly straightforward. A scientist named Dr. Vaseegaran (Rajnikanth) creates a robot and christens him Chitti (also Rajnikanth). In the process of doing so, he alienates his fiancée, Sana (Aishwarya Rai Bachchan), but their relationship is mended through the miracle of song. While trying to gift Chitti to the Indian Army, Dr. Vasi is persuaded by his rival, Dr. Bohra (Danny Denzongpa) to give Chitti emotions so he can better understand and respond to the people around him. This, predictably, leads to Chitti falling in love with Sana, creating an army of robots to try and claim her, and wreak a path of destruction in his desperation to ensure that she, too, falls in love with him.

Interwoven with this story is an exploration of the various ideas of being human. The first half, for instance, focuses on ethical issues of creating life – who is then God? Are there limits to what humans ought to do? What is life? – while the second half chooses to look much more at the consequences of ignoring nature. Throughout, the audience gets the sense of an underlying criticism of traditional Indian culture and faith that never quite gets the courage to show itself. The final scene, especially, hammers in a critique in a way that isn’t seen as blatantly anywhere else in the film. Instead, there are discussions about how Chitti is unnatural and questions about his relationship with God, but these are brushed aside in favour of the lionisation of science and scientific progress.

It’s wrong to say, though, that this is solely a film that explores philosophical issues. This is, as stated previously, a film that showcases all the standard tropes that are found in Indian cinema (as well as what could very well be the best car chase ever to grace the silver screen). It has elaborate and highly entertaining dance numbers. It has a romantic plot at its heart. It has eternally long and implausible action scenes. “Enthiran”’s strength lies in its ability to hold the audience’s attention with these action or song interludes while also trying to discuss philosophical issues. While it may not be entirely successful or even bold in these discussions, it must be admired for being able to bring these questions in alongside endless slapstick and car chases.

Rajnikanth, too, is a major highlight of the film. While his dual performance as both Chitti and Dr. Vaseegaran is admirable, it is in the second half of the film and his performance as Chitti 2.0 where he really shines. He brings all his charisma to bear, throwing himself whole-heartedly into the role and making his enjoyment clear in every moment. His maniacal laugh, especially, showcases the man’s utter passion for the role and his ability to play it.

This is not to say that “Enthiran” is without problems. The fight scenes sometimes feel a bit slow, and some of the earlier musical numbers also feel as though they are never going to end. The portrayal of women, however, presents the largest moral issue with the film. While the cinematography, writing, and choreography are largely excellent (and though the acting outside the leads often leaves something to be desired), it is sometimes difficult to look past the portrayal of women and be able to say this is a good film. One scene, for instance, involves Sana nearly being gangraped by a group of men on a train because Chitti is too busy rescuing her purse to save her. The women in the film are never actors in themselves, but are rather constantly acted upon. Indeed, it’s repeatedly shown that Sana can’t accomplish even her own goals without men’s help. Such a portrayal goes beyond the level of what might be expected in Hollywood, and once again renders it difficult for this reviewer to say that this film is excellent. While it is valid to point out that some degree of cultural relativism must be maintained, it equally seems unfair to be able to defend all such portrayals of women as objects under the banner of cultural relativism. To be clear as well, this is by no means an issue limited to Indian cinema – the portrayal of women is problematic across cinema, including Hollywood. Equally, though, it is also indefensible to dismiss a film such as “Enthiran” for its portrayal of women when so many aspects of the film are excellent. It is an enjoyable film, despite these flaws.

“Enthiran”’s position as a titan of Indian cinema – and Rajnikanth as a superstar – is justified. The film fulfils every promise it makes, delivering both philosophical musings and fun action and dancing. It is a good film, moral problems and all, and well worth a watch.

(All Features), Features, Issue #06, Retrospectives
About the Author
Janneke Parrish

END_OF_DOCUMENT_TOKEN_TO_BE_REPLACED
Taylor Sinople Picks: The 16 Best Films of 2016
Form and Function in Alex Ross Perry’s “Queen of Earth&...
Digging for Fire and Unexpected: Husband and Wife Process Parenthoo...
Every Thing Will Be Fine 3D Review