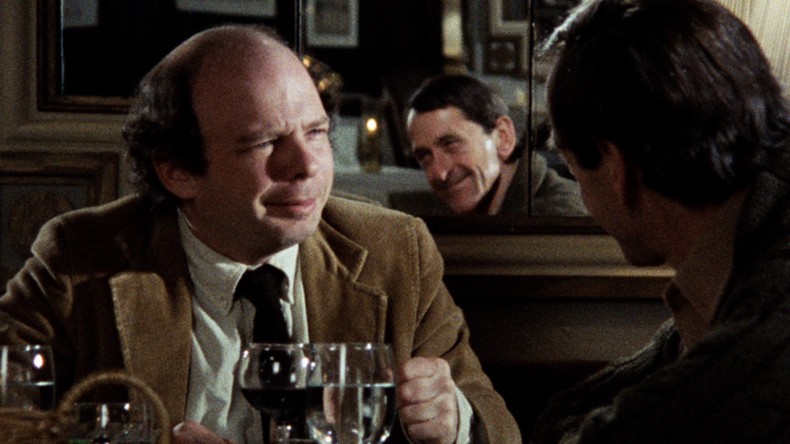 “My Dinner With Andre” is a film that shouldn't work, yet has been captivating viewers for over thirty years thanks to thought-provoking dialogue and charming performances from Wallace Shawn and Andre Gregory.

For over three decades, Louis Malle’s “My Dinner With Andre” has been associated with “intellectual cinema” as much as any other film released before or since. As such, it has had a tremendous influence on American independent cinema: From the early films of Richard Linklater (“Slacker,” the Before trilogy, “Waking Life”) to the “mumblecore” films of Noah Baumbach (“Frances Ha”) and Andrew Bujalski (“Funny Ha Ha”), “My Dinner With Andre” has shaped the way filmmakers and audiences alike have thought about cinema by challenging conventions and shying away from clichés and stereotypes. Its influence continues to be evident in today’s cinematic landscape, in films such as 2013’s “All Is Lost” and current release “Locke”, proving that the film will have a lasting legacy in the years to come.

Championed by Gene Siskel and Roger Ebert, whose public support allowed the film to play in theatres across the country for a year after its initial release, “My Dinner With Andre” chronicles one meal, one conversation, from start to finish. Playwright and actor Wallace Shawn (“The Princess Bride,” “Toy Story”) reluctantly agrees to meet his old friend, theatre director Andre Gregory (“The Mosquito Coast,” “The Last Temptation of Christ”), for dinner at an upscale New York restaurant. Gregory tells Shawn of his varied (and in some cases, quite bizarre) experiences since abruptly leaving the theatre five years prior. The two men then dive into a lengthy discussion in which Gregory skewers modern life as insincere and complacent, and Shawn defends it, asserting that humans should be entitled to certain creature comforts in their lives. By the end of the discussion (and the film), the two men essentially agree to disagree, and yet Shawn seems particularly moved by the exchange, connecting Gregory’s ideas to his own childhood and life on the cab ride home.

By all means, “My Dinner With Andre” is a film that shouldn’t work. There is no plot or action to speak of, and the only conflict occurs in the differing philosophies between the two men. It’s important to remember that the film predates the American independent film movement by about a decade. There was no precedent set – no “Slacker” or “Before Sunrise,” no “mumblecore” movement. “My Dinner With Andre” was originally conceived, in fact, as Andre Gregory had begun the process of authorizing a biography about his life. At around the same time, Wallace Shawn had come up with the idea of basing a story around two people having a discussion, and it wasn’t until after the two men decided to collaborate and were discussing their ideas that they agreed that the project should be a film. “My Dinner With Andre” could just as easily have been a book or a play.

So then why does it work so well as a film? A simple enough question, it seems, but one which doesn’t have any one definitive answer. Part of the film’s success, surely, is due to director Louis Malle (“Lacombe Lucien,” “Atlantic City”), who had read the screenplay and insisted that he work on the project. As written, “My Dinner With Andre” would have been a three-hour long film, and Malle was tasked with arguing with Shawn (who, along with Gregory, penned the script) over which scenes needed to be cut to streamline the film. The resulting 110-minute cut is long enough for the conversation to have a natural flow, yet short enough to keep the audience’s interest, and Malle adds his signature charm to the style of the film, never allowing the conversation to become stale or boring.

And then, of course, there’s the discussion itself. The film’s first hour, based mostly in truth, finds Gregory speaking in length about his travels around the world and experiences with different groups of people since leaving the theatre in 1975. The story that he has to tell is utterly fascinating; at one point, the camera zooms into a close-up on Gregory as he recounts the harrowing experience of being buried alive on one fateful Halloween night. The fear that he felt that night is apparent in his voice and face, and the audience hinges on his every word as he recounts the incident. Gregory is clearly a gifted storyteller, and he uses that gift to great effect throughout the first half of “My Dinner With Andre.”

The second half of the film takes a much more conversational tone, with Gregory and Shawn discussing modern life at length. The discussion is intense and thought-provoking, as the two men invite the audience to participate with them, pondering what it means to be human in an ever-changing world. Gregory, the spiritualist and skeptic, asserts that the life lived by most New Yorkers in modern times is like living a dream: people only experience what they want to experience and perceive what they want to perceive. He suggests that people must simplify their lives in order to fully experience reality, that the path to enlightenment is to eschew unnecessary material comforts in exchange for “real” – if not necessarily pleasant or comfortable – experiences, feelings, and emotions. Shawn doesn’t exactly disagree with Gregory, but he argues that not everybody is capable of climbing Mount Everest in order to experience “real life,” nor should they have to. He contends that people can live perfectly simple and content lives even with their electric blankets and morning coffee and New York Times.

In truth, both men make excellent points, and that’s part of the point of “My Dinner With Andre:” in modern society, one must find a way to strike a balance between the material comforts that make us happy and the simple and “real” experiences that keep us grounded. Shawn and Gregory both represent an extreme at each end of the spectrum, and the conversation aims to strike a harmony between them by proving that neither man can completely disprove the other’s argument.

The great irony which perhaps drives this point home is that “My Dinner With Andre,” a film that passes itself off as a casual and “real” conversation between two friends, was carefully and painstakingly crafted in every aspect. The conversation between Shawn and Gregory was completely scripted from beginning to end, and the two men, rather than having a discussion with each other as themselves, were playing characters that were designed to be comic caricatures of themselves. The film wasn’t even shot in a real restaurant, but rather a film set that was made to look like one; mirrors were used behind the actors to give the illusion of a full and bustling environment.

It’s this juxtaposition between what seems real and what is actually real that makes “My Dinner With Andre” the philosophical masterpiece that it is, and it’s that intellectual depth that has allowed the film to endure for over thirty years. It’s influence can be felt in a tremendous way, providing one of the first prominent examples that film doesn’t need a distinct plot, action and conflict in order to engage the audience. The modern “mumblecore” movement in American independent film owes its very existence  to the precedent set by this film. Without it, the entire landscape of indie film as we know it would be completely different. And that’s why “My Dinner With Andre” is an important film, and will remain so forever.

Tyler is an aspiring filmmaker and lover of all things film. When he isn't obsessing over film, Tyler can be found working, taking minimal breaks for nourishment and that oft-desired and seldom-obtained miracle known as sleep. He resides in Columbus, Ohio.
You might also like
Wallace Shawn

by Tom Willett on May 18, 2014
With a phenomenal dual performance from Jesse Eisenberg, “The Double” challenges the concept of identity with a grab bag of cinematic references that work surprisingly well together.
comments
Leave a reply
Add Comment Register