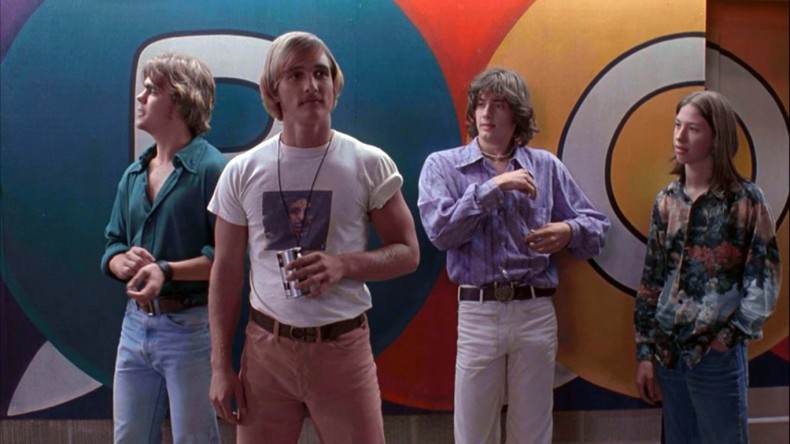 In 1991, Richard Linklater reignited the indie scene with his wandering, Austin-set drama “Slacker,” which used arbitrary run-ins to pass the narrative baton between on-screen characters connected only by coincidence. “Slacker” was a niche hit, and has remained so to this day, but Linklater’s very next film, 1993’s “Dazed and Confused,” broke him into the mainstream.

“School’s out for summer! School’s out for-ever!” Alice Cooper synopsizes in the opening of “Dazed.” It’s The Last Day of School: Austin, Texas suburbia, summer, 1976. A new group of upperclassmen will finally take their place at the top of the school, and they don’t waste a minute in asserting their reign. As the bell rings, they take off over to the middle school, paddles in hand, to greet the incoming freshmen.

It’s a ritual of hazing that’s widely banned today, but nonetheless carries a bit of magic – an adolescent rite of passage that severs the freshman from their earlier lives as children and transforms them via the spank of the wooden paddle and a first gulp of beer — reintegrated into the community as teenagers, working towards the day they, too, will enter the senior class.

Jason London, Milla Jovovich, Ben Affleck, Parker Posey, and Matthew McConaughey are among the many cast members that got their start in the film. The most high profile performance is McConaughey’s Wooderson character – a washed up post-graduate that still hangs around the high school kids. McConaughey, in his first feature film performance (and his best comedy role to date), has only a few “jokes,” but draws some of the biggest laughs with his iconic, southern drawl delivery. He picks up a younger student, asking him, “Say, man, you got a joint?” “No, not on me, man.” “…It’d be a lot cooler if you diiid.” But Rory Cochrane is the funniest in the film – pulling off one of the best, all-out stoner performances of all time. Only Ben Affleck, whose star power was visible even then, to his detriment, stands out from the pack as an actor playing a role.

The giant ensemble serves to tell the type of cumulative story that Linklater first explored in “Slacker” and would continue to perfect in “Waking Life.” We keep tabs on all of the characters simultaneously over the course of one historic night. Linklater regular Lee Daniel photographs the film and does a lot of unobtrusive work that sells the comedy. The simplicity of the flat, medium-wide shot of Wooderson quipping, “That’s what I love about these high school girls, man. I get older, they stay the same age” is as iconic as the line itself.

“Dazed and Confused” is a film with enough characters to allow most people to find someone to attach to. Was your high school experience more like Mitch (Wiggins): the one being taken under the wings of the cool kids and finding himself maturing by the hour? Or Randall (Jason London), the star football player that seems to be the only one on the team to understand the finality of signing the varsity team commitment paper – terrified of what comes next? These are two of the main characters in the sense that they get the most screen time, but “Dazed” is really about all of them. The three unpopular kids that complain about the cliques but still show up at their parties; the second-year senior that shrugs off his failure to graduate but is filled with rage; the confident girl that’s hard to get, but not playing it.

Today, this evocation of reckless abandon and aimless youth would turn out something like “The Bling Ring,” but in 1976 the hormones, frustration, and stress all get released in a night of driving around drinking beers – stopping at a dozen meet-ups a night and going home when the suns up. The fact that Linklater was older than his characters when he wrote this film embeds an inherent sense of reflection to the story. This sense of nostalgia seems to be the anchoring cornerstone to any good coming of age comedy — an awareness of the fleeting nature of it all. Linklater knows that what these kids are experiencing is temporary. There’s a visceral joy to seeing their complete lack of responsibility unfold, but it’s heavy with the knowledge that this will come to an end as they enter the next, adult stages of life.

Linklater is best known for his films that concentrate on a determined stretch of time – a single evening in his “Before” trilogy, twelve years in “Boyhood,” and one afternoon, night, and morning here. There’s a brilliant juxtaposition between the temporal limitations and the limitless scope of the narrative. It’s “coming of age” on an epic scale, with both ends of the experience captured with warmth and humor. Entering highschool – the rush of overnight freedom and maturity. And exiting – forced to confront the looming fear of adulthood and self-reliance. In his 102 minutes, Linklater captures something universal that’s set in the 70’s, shot in the 90’s, and relevant today – and it’s just a bunch of punks causing trouble on the first day of summer.

Taylor is a Chicago-based writer and aspiring film historian. He is the editor here at TFP, and has contributed to a number of international publications such as Cinema Scandinavia, PopMatters, and Room 101 Magazine. He can also be found listening to podcasts, researching topics he has little use for, or running after a city bus.
You might also like
Adam Goldbergben affleckCole Hausermatthew mcconaughey

by Williamson Balliet on July 13, 2014
Transferred from live action to animation, Richard Linklater’s “Waking Life” is a novel approach to filmmaking that promotes inquiry amidst its dreamy, episodic structure.
comments
Leave a reply
Add Comment Register

END_OF_DOCUMENT_TOKEN_TO_BE_REPLACED
Taylor Sinople Picks: The 16 Best Films of 2016
Form and Function in Alex Ross Perry’s “Queen of Earth&...
Digging for Fire and Unexpected: Husband and Wife Process Parenthoo...
Every Thing Will Be Fine 3D Review