Features
3
4
previous article
Umbrellas and Pebbles: Finding Meaning in the Art of Jacques Demy and Robert Frost
next article
Review: Me and Earl and the Dying Girl 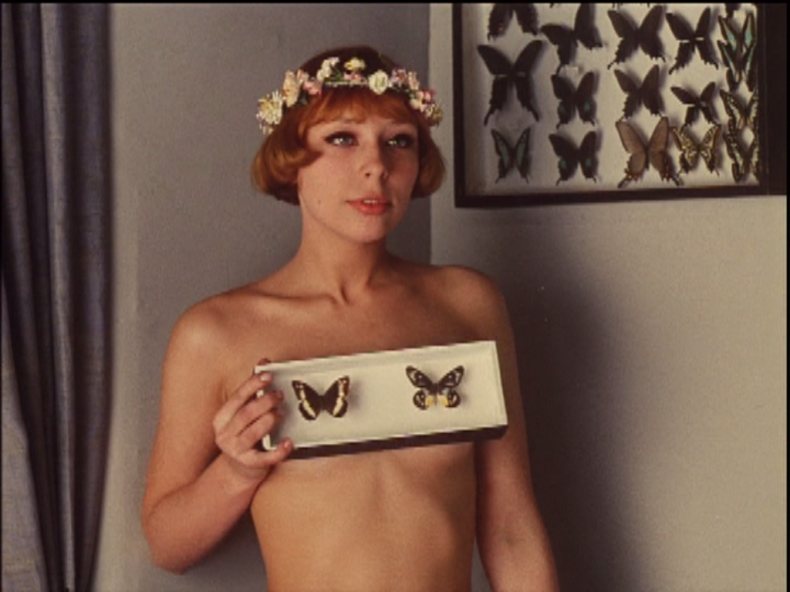 An innovator of both form and message, Vera Chytilová's "Daisies" challenges its audience to dig for meaning, and question everything. A defining piece of the Czech New Wave, "Daisies" is a testament to film's power as a means of protest.

Raging against a slowly collapsing society, and perfectly encapsulating the destructive angst of adolescence, Vera Chytilová’s seminal Daisies (Sedmikrásky) uses the absurdist visuals and experimental forms of the Czechoslovak New Wave as a protest against Stalinism and the worldwide mistreatment of women. Having endured a near constant state of turmoil, Czechoslovakia battled against internal ethnic unrest and external degradation (mainly at the hands of Hitler), only to have been swept up by the growing wave of Communism, and suffering immense hardships under the brutal rule of Stalinism. Unable to sit idly by and watch their country crumble due to a plummeting economy, and an unchecked authoritarian state, groups of artists, filmmakers and intellectuals banded together to make the voices of the people heard. Students in Prague’s FAMU (Film and TV School of the Academy of Performing Arts) committed to change by starting a movement known as the Czech New Wave, which used film and television as a means of mass protest against their oppressive Stalinist government. An hour and thirteen minutes of jovial frenzy, Daisies‘ deeply controversial themes are hidden beneath a veneer of dynamically-abstract visuals. The imbedded protests proved far too radical for the Czechoslovakian government, who banned it immediately.

Starting with one of the most iconic scenes of the Czech New Wave, two Maries (Ivana Karbanová and Jitka Cerhová) sit discussing the world. Motions accented with a wooden squeaking, Marie 1 decides she is little more than a doll, and should be treated accordingly. Quickly moving on, Marie 1 knows that Marie 2 does not understand, “nor does anyone anymore,” and both become fed up with living in a world that has become spoiled – deciding that, in order to take full advantage of the changing global environment, they must become equally so. Embarking on a quest to constantly top each other’s puerility, Marie and Marie swindle men into paying for lavish meals, steal from bathroom attendants, and betray all sense of social grace.

Daisies is a seductively fascinating film. Not only has Chytilová introduced elements of surrealism, she has also employed a host of camera and celluloid manipulation techniques to further remove the audience from the already sporadic narrative. Removed from an emotional attachment to whatever semblance of a story remains, the audience is forced to consider the underlying message of the film. Whether noises force cuts to new settings or objects miraculously turn into other objects, Chytilová is exploring narrative cohesion and pushing the boundaries of reality. Daisies is filmed with various film stocks, (black and white, tinted, and full color) often playing along with the elements on screen. An immeasurable excitement is injected into otherwise dull scenes and the jump cuts signal a change in time, but also color. A meal out is transformed into a magical adventure with the constant rotation of tinted celluloid, brought upon by questioning and ambient noise.

While there is certainly an air of whimsy to Chytilová’s picture, it is also filled with profoundly serious themes – relative to both its origins, and to a much more far-reaching time and place. Daisies, and its creator, are major proponents of feminism; agendas clearly stated from the onset of the film. The Maries are frustrated with the labels imposed on them, being young attractive females. Remarking that society see them as “dolls,” they are forced to abide by these societal guidelines. They should not become scientists, they cannot be artists, they would never make it on their own; they must have fun while dating around, and quickly find a husband. Constantly accosted with the knowledge that beauty and youth are fleeting (the primary topic of their discussions with the matronly bathroom attendants), they are only told to have fun while they can, never to better themselves to ensure a brighter future. Any outburst from the duo is quickly recognized as improper: women are to speak gently and be polite, it is men who have large appetites and can speak brashly.

A much more overt theme in Chytilová’s film is the condemnation of the perverse system of values imposed upon Czechoslovakia by the Soviet Union, and the Communist parties controlling the state. Although Joseph Stalin died in office 13-years prior to the film’s release, the decay of Stalinism in Czechoslovakia, and its brutal “state terror” policies, was incredibly slow. Politicians and dissenters were being rounded up, branded as traitors and spies, and quickly executed by the state. Chytilová takes a seemingly trivial matter, the wasting of food, and places it on wholesale display. With massive food shortages all over the country, rations were put in place to ensure supply. Throughout the film, the Maries’ wanton waste of food is, even today, extreme. While the duo eat lavish meals at extraordinary banquet halls, leaving scraps and crumbs all over the tables, the audience begins to feel contempt for the two. However, this contempt breeds a kind of admiration for the girls, taking the lifestyles of the wealthy, and shoving it, ten-fold, back in their faces. Real questions arise as the girls have free access to bountiful meals the moment they become the “playthings” of wealthy men. One begins to question why such places still exist when millions of citizens are starving. The problem is not that the girls are brazenly leaving behind scraps enough to feed a family, but that the rich and powerful are indulging in a daily excess that could feed thousands. Ending her film with a typewriter-scripted condemnation; “This film is dedicated to those who get upset only over a stomped-upon bed of lettuce,” Chytilová recognizes that her (starving) audience would likely be disgusted by the overindulgences, yet openly challenges them to find the deeper meanings behind her images.

The beauty of Chytilová’s Daisies is its ambiguousness and fluidity. Each scene can be broken down and dissected, a ductile patchwork of images that has the ability to mean many things to many people. This is where the power of Daisies lies, it is not in the absurdity of food wasting or the destruction of social obedience, but in the provocation of discussions; leading the people of Czechoslovakia (and other cultures around the globe and throughout time) to learn that they never need to accept meaningless limitations without first questioning their very existence.

Jordan Brooks is a contributor to several online publications, including his own blog focusing on streaming film. Being an avid lover of film, he has recently begun diving more deeply into film history; and is working towards becoming more educated in world cinema. He currently resides in sunny California with his girlfriend and their dog (although the real film buff in the family is definitely the dog).
comments
Leave a reply
Add Comment Register

END_OF_DOCUMENT_TOKEN_TO_BE_REPLACED
Taylor Sinople Picks: The 16 Best Films of 2016
Form and Function in Alex Ross Perry’s “Queen of Earth&...
Digging for Fire and Unexpected: Husband and Wife Process Parenthoo...
Every Thing Will Be Fine 3D Review