A Fresh Look At: Coz Ov Moni 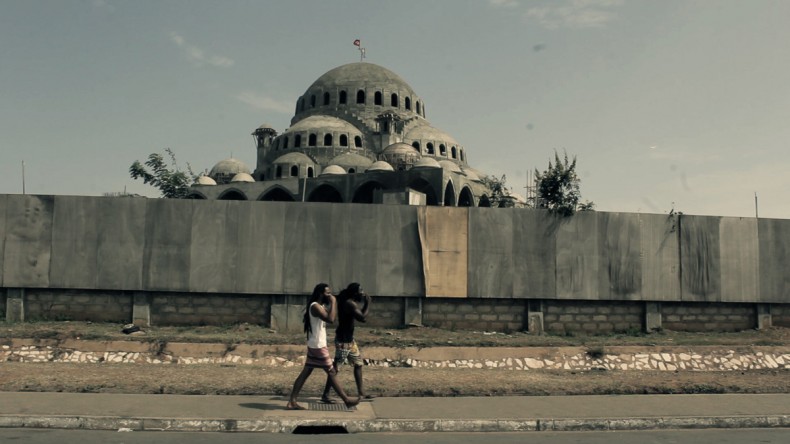 “Cuz Ov Moni” might have been made because of money, but it’s still well worth a watch.

One of the interesting questions that a film reviewer must face is what exactly can be reviewed, and what can’t. Obviously films are created with different audiences in mind, sometimes even with the idea that they aren’t meant to be critiqued, but simply to be enjoyed. This is an argument that doesn’t hold much merit – after all, if something exists, then it can be thought about and thus critiqued – but there are instances when it becomes more relevant.

“Coz Ov Moni” is one of these instances. A 2010 Ghanaian film, “Coz Ov Moni” bills itself as the world’s first Pidgen musical, and most likely it is. However, it’s also a very small film with a low-budget and no real attempt to expand outside Ghanain film festivals. If anything could be said to not be “for critics,” “Coz Ov Moni” is probably it. However, as I argued earlier, it exists, and it can be thought about, so why not critique it?

“Coz Ov Moni” has a plot, though there are moments during which it gets incredibly distracted. The plot follows two Ghanain rappers as they go through their day, encountering people, clubbing, and having a near-death experience. For a short film like this one, it’s a good story, and it’s certainly entertaining. There is a certain degree of comedic genius at play, and Ansah and Owusu-Bonsu certainly knew how to make their audience laugh.

That said, they also made a baffling decision to, at one point, cut away from the story to include a song thanking numerous black people who had accomplished something in their lives. This added nothing to the plot, nor to the overall message of the film. Indeed, the list of who they chose to include and thank – which included a range of people from Steve Biko and Nelson Mandela to Michael Jackson – was in and of itself confusing and strange. It served as a distraction from the plot, but not one which could be said to make any kind of sense.

However, when the script stayed focused on the story, it is good. The simple story of two men going about their day is a good one, and it shows both some representation of life in Ghana as well as commentary on it. The film shows happy people, enjoying life, a refreshing change from many African films seen and showed in the past. The fact that “Coz Ov Moni” has an African perspective – specifically Ghanaian – helps it be honest and perhaps even a bit more compelling in the view it presents. Of course, “Coz Ov Moni” is a comedy at heart, but there is still something to be said for being able to make a scene of the two main characters being beaten to death comedic.

The music too is very good. As rappers, M3NSA (Mensa Ansah) and Wavlov the Kubolor (Emmanuel Owusu-Bonsu) know their craft well, and know how to perform on camera. The chemistry between them also makes the pair of them incredibly fun to watch, especially as they go through the day’s adventures. Perhaps best of all is the choice of song topics throughout the film. With two exceptions, “Coz Ov Moni’s” songs are not about deep philosophical ideas or emotional outbursts. They are about things like two men ordering lunch and complimenting the food, going swimming at the beach, and stealing shirts. They are mundane songs about ordinary things, and it is perhaps in this fact that “Coz Ov Moni” really shines. It ostensibly presents a view of ordinary life, and it makes it humourous and fun.

“Coz Ov Moni” does it show its budget. Its shots and angles are simple, and the quality of shots is sometimes lacking. However, this doesn’t detract from the film as a whole. If anything, it increases its credibility and believability. It makes the idea of these two men going through a town and singing about their day much more believable.

On the whole, “Coz Ov Moni” is a fun little film, which, while not too long, still takes its audience on a jaunt through Ghanaian rap. The scenes and stories it presents are good, and the comedy is excellent. While rough around the edges, “Coz Ov Moni” holds definite value, especially for anyone interested in Ghanaian culture and film, or African film more generally.

END_OF_DOCUMENT_TOKEN_TO_BE_REPLACED
Taylor Sinople Picks: The 16 Best Films of 2016
Form and Function in Alex Ross Perry’s “Queen of Earth&...
Digging for Fire and Unexpected: Husband and Wife Process Parenthoo...
Every Thing Will Be Fine 3D Review