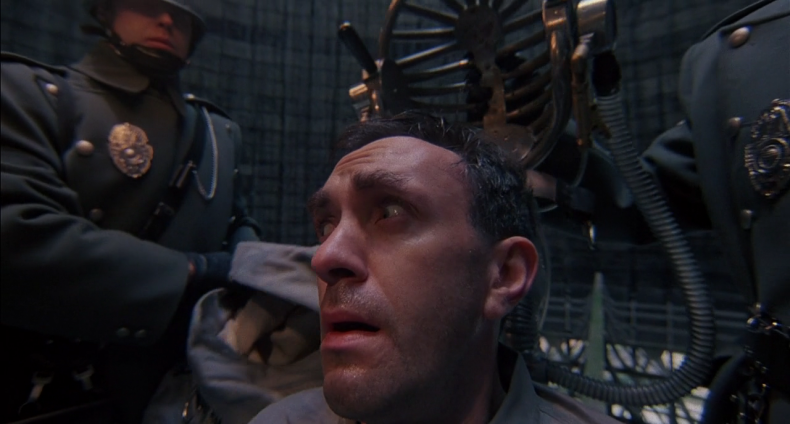 Pervasive ductwork and bright neon signage define Terry Gilliam's dystopian masterpiece. Celebrating its 30th anniversary on February 20th, "Brazil" is a transcendent and hilarious satire of government bureaucracy and corporate greed. Speaking to generations far outside of its humble 1980's beginnings, "Brazil" has made an indelible mark on the sic-fi landscape, and carries with it a strong message, as relevant today as it ever was.

A pointed indictment of bureaucratic coldness, Terry Gilliam’s Brazil places an “everyman” hero into an “anyplace” setting, breaking down generational barriers, and engendering a timeless ability to speak to audiences far beyond its 1985 release year. A visually-stunning, dystopian masterpiece, Brazil is as thought-provoking as it is dazzling, evoking a miasma of emotion from the depths of crazed frustration to the heights of blissful escapism.

Sam Lowry (Jonathan Pryce) is stuck in the doldrums of civil service. Working in a bustling office for the bland, yet pervasive Central Services, Sam dreams of being free from the shuffling papers and mindless computer entry. He dreams of being the hero who rides into town and saves the day at the last possible second – freeing the damsel in distress, and making a life with her once the evil has been vanquished. Sam has these dreams a lot. Carving out a life for himself, Sam has used his powerful mother’s influence very little, and is content with the majority of his life. A nice apartment, friends, and his gadgets keep Sam in a perpetual state of complacency, unable to break free from the cycle of “middle management.” Until Sam happens upon the girl he has had endless fantasies about: Jill Layton (Kim Greist). Sam uses his status to find out as much as possible about Jill, discovering quickly that her file is marked with a higher clearance than his current position. Attending his mother’s annual Christmas party, Sam finally cashes in on his connections, and secures a position in a much higher division. Deeper and deeper into the rabbit hole, Sam soon finds his world dissolving around him – chaos is everywhere in this highly controlled society, poised on the edge of collapse.

The second in Terry Gilliam’s “Imagination Trilogy” Brazil is astoundingly detailed, every set showing intricate detail closely monitored by Gilliam himself. From Sam’s vivid waking dreams populated with black monoliths and baby-masked harbingers of doom, to Gilliam’s preposterous “future” embedded with cartoonish robots and homes choked with vine-like ducts. Using a mix of models and wide-angle lenses, Gilliam creates a vast world, far beyond the “possible” limits of his $15 million-dollar budget. Everywhere one looks in Brazil is an homage to the German-Expressionism of Fritz Lang, or the satirical conclusion of an idiotic invention of Gilliam’s past. It is hard not to reflect on Metropolis in Gilliam’s “Anyplace” future, hulking symmetrical buildings joined by walkways, and surrounded by orderly and precise roadways. Redundancy is a major theme in Gilliam’s takedown of bureaucracy, and one that permeates through to the production design. Computers with tiny screens, made much larger by magnifiers, finger sensors that “automate” typewriters, yet only eliminate the pressing of the actual keys – everything is designed to make life easier at the cost of extreme, redundant, complexity.

Ductwork has a major presence in Brazil, as has been noted in most retrospectives since the film’s release in 1985. In a future obsessed with newer and better technology, citizens have given up their obligation to aesthetics, in favor of convenience. The clunky “advancements” are provided via unwieldy ductwork that cuts through walls, crisscrossing grand halls and Victorian apartments, destroying countless decades of artistry to power a light or provide programming to a television. Gilliam has taken real-world problem (providing plumbing/electricity to Victorian homes), and taken it to its hilariously logical conclusion. A citizenry completely at the mercy of a State-run corporation (or corporation-run state), Gilliam’s future is only an extreme cessation of modern practices.

Brazil, at its heart, is a condemnation of the mindless work meant to keep the lower-middle classes of society busy. Whether under the guise of public welfare, national security, or personal safety, the propagandists at play in Brazil have set up a system to keep their population in check. Endless streams of paperwork, in duplicate and triplicate flood the workrooms of Central Services; keeping hoards of workers busy (or busy enough to seem constantly busy) entering useless data into computers. Checkers checking checkers in an endless loop of nonsense, clear as day to Gilliam, being exposed to mass audiences unaware of the senseless drudgery that they themselves take part in every day. Gilliam brings a skeptical humorist’s eye to the atrocities being committed writ large, exposing the ridiculousness of actual crimes being committed globally. Not an angry protest, Brazil reveals its truths through a supreme humor, shrouded in little mystery. Charging prisoners for the methods of torture used on them to extract confessions was a real practice, made ridiculous under Gilliam’s twisted magnifying glass. In a state where everything is kept in such divine order, Gilliam introduces small bits of inane disorder. Massive, coordinated efforts to imprison chunks of the population are carried out on a daily basis, yet the elevator in the main building of Central Services has a tendency to stop mid floor, and the tiled walls of the “interrogation” floor are unfinished. In a world full of meticulous steps and processes, nothing is finished, and seemingly everything is left half-completed.

Jonathan Pryce is the glue that holds Brazil firmly together. Unflappable in his moral ineptitude, Pryce’s Sam is a milquetoast middleman, whose most daring act of bravery is offering to visit the widow of a mistaken terrorist in order to hand-deliver the refund check for her husband’s torture. Blind to the barbarousness of the world around him, Pryce’s Sam is a product of his upbringing, numb to the harsh reality of his existence. A luminous mix of befuddlement, awkwardness, and self-importance, Pryce’s Sam is the perfect hero in this doomed world. A beguiling Robert De Niro offers one of the film’s best cameos as the heroic HVAC specialist, Harry Tuttle – a rogue fixer of problems and a constant, efficient thorn in the side of the bumbling Central Services. Katherine Delmonico plays a ghoulish Ida Lowery, in constant need of painful plastic surgery, and filled with the desire for Sam to follow in his father’s footsteps.

Hardly giving the impression that it is 30-years old, Brazil is every bit as relevant as the day it was made. While Gilliam’s predictions of computer technology were slightly (way) off, his projections for the placement of corporations over individuals is as correct as it has ever been, in a world dominated by greed. A shining achievement with any budget, Gilliam’s resourcefulness with visual effects lends to the picture’s overall quality, transporting its audience into the bleak future he has so carefully crafted. A triumph of the imagination, Brazil‘s lasting legacy as a socio-political, and wholly unique piece of sci-fi will continue to follow it as it presses on into the (hopefully less-dreary) future.

Jordan Brooks is a contributor to several online publications, including his own blog focusing on streaming film. Being an avid lover of film, he has recently begun diving more deeply into film history; and is working towards becoming more educated in world cinema. He currently resides in sunny California with his girlfriend and their dog (although the real film buff in the family is definitely the dog).
You might also like
brazilJonathan PryceMichael Palinmonty python

by Justin Giglio on June 1, 2014
The history of cinema is full of imaginary worlds that are both incredibly different and uncomfortably similar to our own, reflecting the best and worst aspects of society, human nature, philosophy and our place in the universe. Science fiction films manage to capture our collective imagination and reflect issues that affect us all. Above all, […]
Comments
Leave a reply
Add Comment Register

END_OF_DOCUMENT_TOKEN_TO_BE_REPLACED
Taylor Sinople Picks: The 16 Best Films of 2016
Form and Function in Alex Ross Perry’s “Queen of Earth&...
Digging for Fire and Unexpected: Husband and Wife Process Parenthoo...
Every Thing Will Be Fine 3D Review