Features
0
previous article
Bonding with Bond: The Spy Who Loved Me (1977)
next article
A Fresh Look At: God Grew Tired of Us 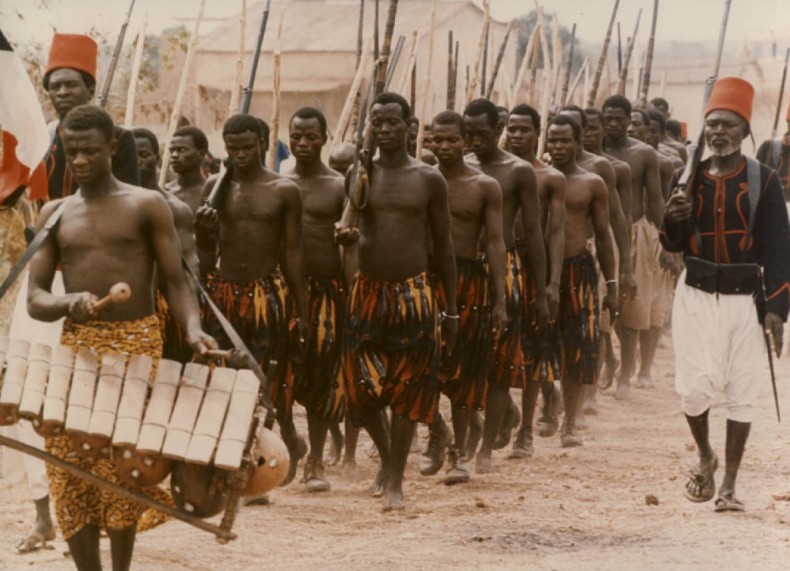 “Black and White in Color” is an excellent example of twisting a colonial message into something entertaining and fun.

“Black and White in Color” is a 1976 Cote d’Ivoirean and French film about a colonial village that suddenly realises that it’s WWI and it should be at war with its German neighbours. It’s an excellent comedy, but beyond that, it makes a scathing and effective statement about war, colonialism, and the exploitation of native peoples.

The film follows the people of the village of Fort Coulais in Cote D’Ivoire at the beginning of 1915. The village is remote, and so when Hubert Fresnoy (Jacques Spiesser) receives newspapers from Paris, it comes as a shock to discover that France is at war. The residents of the village decide it is their patriotic duty to attack the nearby German fort, conscripting the local Cote d’Ivoireans to do so.
Throughout, the comedy is fantastic. It relies on understanding exactly how ridiculous the entire war is, both for those directing it and those fighting it. The conscripted natives, for instance, are never told why, exactly, that they are fighting, or indeed, that they will be fighting at all. It’s not until they are shot by Germans that anyone bothers to tell them what a war is, and at that point, the telling is done by leaving them to die. Equally, natives fighting for the Germans are shown to not have any better understanding, representing and dying for the country for unfathomable reasons.

The film also focuses on the breakdown of society. While it opens with the idea of the French as civilised and the natives as barbarians, over the course of the story, it becomes more and more clear that the film feels the opposite. It presents things like the singing of “La Marseillaise” in the same light that native African dances and songs are usually portrayed – it shows it as mystifying, unjustified, and backwards. The natives, meanwhile, are shown to sing songs about how ridiculous the French are, all while the French have not the faintest idea what’s being sad. It’s a comedy that reverses the standard portrayal of the colonist-colonised relationship, going beyond even a pitying perspective and instead seeing the colonisers as the colonised might see them – ridiculous and blood-thirsty.

It’s the message and wry comedy that make “Black and White in Color” spectacular. Despite the fact that it’s now almost 40 years old, the film’s message about the absurdity of war, the absurdity of colonialism, and the stupidity of sending outsiders to fight a war they have no stake in still rings true. There’s still a lot to learn from “Black and White in Color,” and a lot of laughs that can be had along the way.

Beyond the comedic aspects, the film is generally well-made. The shots of Cote d’Ivoire are very good, and the writing does an excellent job showing just how ridiculous the French approach to the war – and towards life in Cote d’Ivoire – is. Scenes like the French initially crossing into German territory in sedan chairs and carrying a picnic are brilliant in their indictment of how war is and was approached.

The incidental music, too, is well-worth a mention. It is expertly done, taking common French musical themes and making them sound ridiculous and alien. It perfectly augments the comical mood of the film, while not making it too laughable.

On the whole, “Black and White in Color” is an excellent anti-war comedy as well as an excellent commentary on colonialism and its effect on both colonised peoples and the colonisers. Its humour is as good now as it was when it was first released, and its message remains relevant. It is a stellar film, and one well worth watching.

END_OF_DOCUMENT_TOKEN_TO_BE_REPLACED
Taylor Sinople Picks: The 16 Best Films of 2016
Form and Function in Alex Ross Perry’s “Queen of Earth&...
Digging for Fire and Unexpected: Husband and Wife Process Parenthoo...
Every Thing Will Be Fine 3D Review