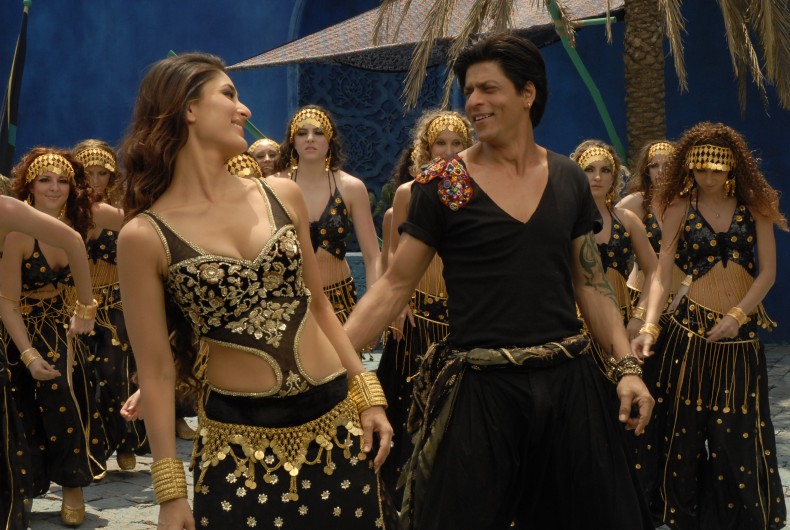 Billu teaches us that film stars are gods, or perhaps that they’re not. I’m not really sure.

Billu is a fascinating film. Between its social commentary, its confused message, and its ostensible retelling of a traditional Hindu story, it’s just a fascinating amalgamation of ideas, many of which never really seem to come to fruition. What is there, however, is more than enough to lead the audience down any number of paths of thought, and certainly provoke a discussion of what ought to matter when discussing a film. Should it matter what the film makers intended when they set out to make a film? Or does the audience’s interpretation have the final say?

To add some context, Billu is a Bollywood film retelling the story of the friendship between the Hindu god Krishna and the mortal Sudama. Billu retells it by casting a film star named Sahir Khan (Shah Rukh Khan) as Krishna and a lowly village barber named Billu (Irrfan Khan) as Sudama. When Khan chooses to shoot a film in Billu’s village, shenanigans ensue as the villagers learn of Billu’s friendship with Sahir and try to capitalise on it.

However, what must first be focused on is the film’s relationship with the Indian film industry, and specifically the choice to cast the film industry as “divine” and its stars as “gods.” It’s unquestionable that the filmmakers intended for this to not be sacrilegious, wanting it instead to be a retelling of a traditional story and a commentary on the common person’s relationship with their idols. However, the way the story is structured lends itself to a much less charitable interpretation of these intentions.

Much of the first twenty or so minutes of the film is devoted to establishing Billu’s life. He lives with his wife (Lara Dutta) in abject poverty, trying to revive a struggling business, and failing to do so. He tries, but fails, but yet still manages to live a pious and decent life. The audience watches him make offerings to the gods, pray, and ask for something to help, but to no avail. This introduction is compelling, and brings the viewer in to Billu’s struggle.

However, it is interrupted by the entrance of Sahir Khan – apropos of nothing – and playing a space invader. It’s such a jarring transition that one can’t help but wonder what exactly was intended with it. Certainly it emphasises that Sahir and Billu live in different worlds, but considering the central plot ostensibly focuses on their relationship rather than their differences, it also comes across as poorly thought-out.

If the idea of the film is to portray the relationship between gods and mortals – or movie stars and everyday people – as a mutual one, the disparity in songs, too, speaks to how this attempt fails. There are several songs throughout the film, with most having no relation to the plot whatsoever. Rather, they are large, garish dance numbers that emphasise Sahir and Shah Rukh Khan’s own abilities. Rather than showing the similarity between Sahir and Billu, it only serves to further divide them.

All of this leads to the question of what this film is actually about, and what it means that film stars would be portrayed as modern day gods. There is no question that there is some degree of celebrity worship in all cultures, and that is certainly no different in India with its film stars. However, it is difficult to see how a film that is as self-aggrandising as Billu could be seen as furthering this idea of the commonality between movie stars and ordinary people. It tries and fails to depict movie stars as ordinary people, instead cementing the difference both in-world and out of the world, be it through the use of security guards for the character of Sahir, or through the fact that it is only Shah Rukh Khan who gets the large dance numbers.

A further problem complicates critiquing Billu. While its story is a jumbled mess of metaphors and failed messages, the camerawork, set design, and costumes are spectacular. It is an absolutely gorgeous film to watch, even if the script is not all there. Both Shah Rukh Khan and Irrfan Khan, too, deliver great performances, bringing their respective characters to life and making them real. Irrfan Khan, especially, deserves a lot of credit for giving Billu the right balance of intelligence and misfortune.

Unfortunately, though, it is difficult to overcome the feeling that this is a pet project meant to build up Shah Rukh Khan rather than an honest attempt to tell a story. Whether it’s necessarily a bad thing for a pet self-promotion project to exist is another question entirely, but certainly the over-focus on Shah Rukh Khan and the character of Sahir makes this film difficult to watch. It makes it a film about the difference between ordinary people and movie stars, and how it is justifiable to idolise stars. It’s an uncomfortable message, even if it’s not necessarily the one the film makers intended.

Janneke Parrish lives in South Korea where she struggles to order pizzas and consoles herself by watching far too many movies.
You might also like
Irrfan KhanShah Rukh Khan

by Vivek Suvarna on May 19, 2014
Ritesh Batra explores the subjective contentment of life and happiness of two people as they share a conversation through a misplaced lunchbox.
Comments
Leave a reply
Add Comment Register

END_OF_DOCUMENT_TOKEN_TO_BE_REPLACED
Taylor Sinople Picks: The 16 Best Films of 2016
Form and Function in Alex Ross Perry’s “Queen of Earth&...
Digging for Fire and Unexpected: Husband and Wife Process Parenthoo...
Every Thing Will Be Fine 3D Review