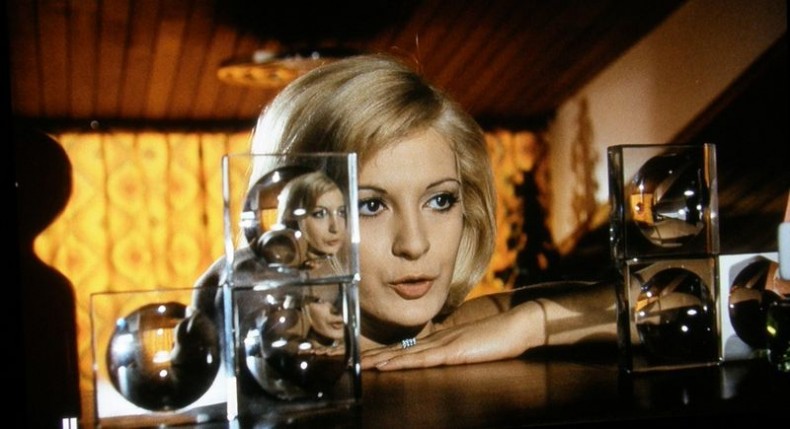 “Bay of Blood” is that rare sort of film that is a lot of fun if you let it play out on its own terms, and actually succeeds in offering more than might be expected from a film of its class.

Mario Bava’s 1971 film “Bay of Blood” is that special, delicious brand of Italian giallo which so entrances and entertains with its amateur acting, ambitious direction, and distinctly ’70s brand of bright-red, B-movie blood.  Giallos are like Italian Neorealism re-invented for all the wrong reasons.  They really shouldn’t work, yet somehow often they do.  Their creators seem to have thrown out all sense of good taste and creative restrictions during production, and it is thanks to this reckless abandon that they rarely fail to entertain.

The plot of the film is hard to pin down succinctly, mostly thanks to its weaving insanity and heavy implausibility.  Suffice it to say that a great deal of killings take place in the vicinity of a beautiful bay in the interests of gaining a large sum of money from a family inheritance. In this case, to try and untangle the plot might be to miss the point.  From scene to scene, everything seems to continually be in the interest of setting up the next instance of murder and fascinating camera work.

Worth noting is the seemingly infinite permutations of the film’s title.  What began as “Carnage” came to be commonly known as “Twitch of the Death Nerve,” “Bloodbath,” and “A Bay of Blood,” among others.  What none of these titles betray is the film’s absolute revelry of each absurdly gory kill. Yet something about the vibrancy of that ‘70s movie-blood simultaneously keeps the violence at a ‘cartoony’ distance without becoming outright funny.

The perpetual zooms in “Bay of Blood” pre-date the time-travelling ones of Nicolas Roeg’s gleefully psychotic 1973 supernatural thriller, “Don’t Look Now,” and are used to somewhat different ends. From the film’s start, the zooms are relentless (as many as four can be spotted within a single take), and so is the blood — coming good on the title’s promise. While these zooms might easily be dismissed as a low-brow attempt at high-brow directorial bravado (it is well-worth noting that Bava also acted as the film’s cinematographer), they not only work startlingly well, but establish the kinetic motion to come: that of a stabbing motion. It is exactly this sort of extra thought on display which separates “Bay of Blood” from the ranks of its B-movie brothers.

Then again, to only praise the use of zooms as a highly deliberate artistic choice is perhaps to dabble in the romanticizing of the auteur concept.  After all, the film suffers from such an incredibly low budget that it is far more likely that many artistic choices were made for budgetary reasons above any others.  It is said that the budget was indeed so low that Bava rode around in a small wagon for the film’s dolly shots.

Whatever the case and regardless of what was or was not strictly deliberate, the film remains a highly influential giallo and a milestone in low-budget horror.  Although claims that it might have single-handedly invented the ‘slasher’ genre may be overwrought, there’s still plenty to appreciate about Bava’s quaintly disturbing picture.

Maximilien Luc Proctor graduated with a Bachelor’s degree in Film and Media Studies at the University of Oklahoma. In his spare time he plays guitar and sings in a band, as well as watching and making films however and whenever possible – as a one-man-production-team making avant-garde shorts or as a director of a small-scale independent feature productions. He likes what he sees in cinema and wants to celebrate the good stuff whenever possible.
comments
Leave a reply
Add Comment Register

END_OF_DOCUMENT_TOKEN_TO_BE_REPLACED
Taylor Sinople Picks: The 16 Best Films of 2016
Form and Function in Alex Ross Perry’s “Queen of Earth&...
Digging for Fire and Unexpected: Husband and Wife Process Parenthoo...
Every Thing Will Be Fine 3D Review