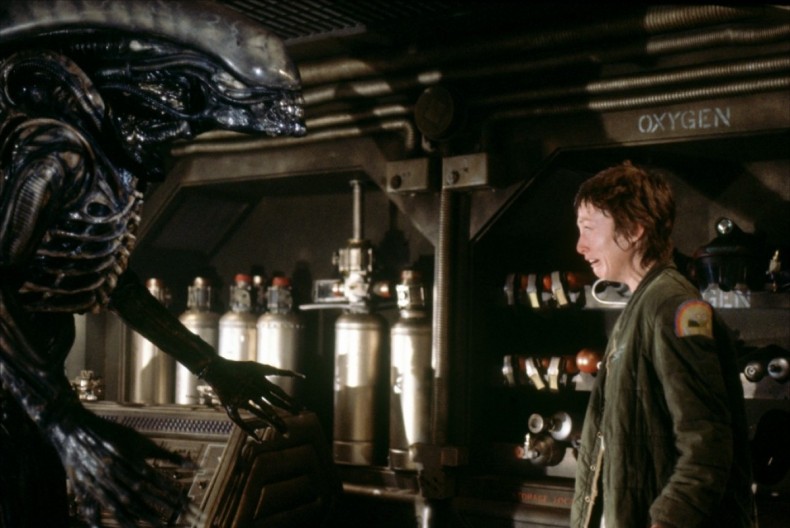 A mark of any great film is its ability to remain fresh and vibrant even after one watches it countless times - "Alien" is such a film - it is quite simply an enduring classic for the ages.

There are some films that are truly unforgettable, and Ridley Scott’s “Alien” is certainly one of them. Through its incredibly minimal and simplistic storyline, Scott managed to bring to the world of cinema a genre-bending film that has been repeatedly and consistently emulated, but never quite equaled. From its profound cautionary study of a future run by sinister machine-operating corporations, to its subtly deliberate pace slowly leading to one of the most harrowing and petrifying climaxes ever filmed, “Alien” is grim, horrific and utterly traumatizing with its wonderful exploitation of our primitive fear of the unknown. It is not much of a stretch to call the film perfect, and is undoubtedly the work that put Scott on the cinematic map with his undeniably impressive visual craftsmanship. The distinct suspense of the film is still a good shock to the system, as it is set in the deep, outer reaches of space (where “no one can hear you scream”), and it is the eerie silence and desolation that stand out; allowing the film to age beautifully since the original 1979 release over three decades ago, proving that true classics are in fact timeless.

You might say that not a lot really happens during the first thirty minutes of “Alien,” but, in actuality, it represents some of most economical world building in cinema. Everything from the creaky structure of the Nostromo vessel to the earthiness of its inhabitants makes “Alien” an ironically grounded film; this isn’t the sleek, fantasy-laden futurist vision of space that we often see – a place where exploration is reserved for privileged astronauts. Instead, this is a future where space is just the next frontier, and we’re following the exploits of truckers and miners charged with the task of transporting materials across space rather than across country. They harmlessly quarrel over pay bonuses and complain about the terrible catering. Ultimately, they are us – the common man in a situation that seems remarkably common until it becomes uncommon upon the discovery of a distress signal on a nearby planet.

“As most of you may know, we’re not home yet. We’re only halfway there. Mother’s interrupted our journey for she’s programed to do so unless things change. Things have changed. It seems that she has… intercepted a transmission of unknown origin. She got us up to check it out.”

Scott’s steady director’s hand is the force that guides “Alien” into greatness; few films are as elegantly paced and suspenseful. He mixes both long and close up shots in order to maximize the tension and feelings of claustrophobia, as the Nostromo’s basements and air shafts provide some of the more paralyzing scenes, as both the shadows and tight camera frame conceal the alien in the background, lurking just out of sight.

Above all, “Alien” is a film that really pushes the limits of its craft. Cinematographer Derek Vanlit’s work goes from stunningly stark, monochromatic whites in one moment to impressionistic, and foreboding shadows in the next (the climatic sequences with the emergency sirens and two-color orange and black scenes are simply masterful). Nothing is out of place here, with every element perfectly composed to maximize tension and an unavoidable crescendo. Instead of filming “Alien” as the B-movie it was supposed to be, Scott treated it as seriously as he could; fleshing out the film’s insidious environments with fantastically talented artists such as Moebius (whose brief work would inspire the film’s final space suits) and of course H.R. Giger’s unique and disturbing alien design. It goes without saying that Giger’s creature is one of the most influential to ever grace the big screen, and in our present day where aliens tend to look especially flat and uninspired, Giger’s stands the test of time with its precise form and distinct menace – showcased yet leaving just the right amount to the audience’s grotesque imagination. Scott doesn’t fully reveal his beast until the climactic sequence, by which point “Alien” has ramped up is at the height of suspense and tension, complete with strobe lighting and Jerry Goldsmith’s hysterics-laden score. It is made even more impressive when we consider that all of the environments and creature’s staggeringly minute details were done during the pre-CGI days, utilizing only models and prosthetics, which have held up remarkably well. Simply look no further than the genuinely disturbing ‘facehuggers,’ ‘chestbursters,’ along with that mysterious space jockey in his eerie chamber, and you can see just how Scott’s attention to detail in this film is second to none.

Of course, none of the film’s atmosphere or sheer terror would have made the impact that it did, if it didn’t have the unforgettably realistic array of characters to pull us into the middle of each startling situation. Dallas, Kane, Lambert, Ash, Brett, Parker and Ellen Ripley are relatable without many of today’s cardboard cutout stereotypes and feel like real people, conversing with realistic dialogue, and acting with more logic than false drama. Unlike most survival horror films, it is almost impossible to tell who will survive by the end or not, making the iconic character of Ripley a true survivor. No one around her feels expendable; in fact, she (nor anyone else) is presented as a protagonist. Tom Skerritt’s Dallas is the perfect late seventies leading man; a captain defined by intelligence rather than misplaced masculinity. The ship’s two mechanics (Harry Dean Stanton and Yaphet Kotto) feel as though they should be the boneheaded muscle, but both resist this; Veronica Cartwright’s Lambert may be most remembered for her moaning, but there is a sense of realness to this that echoes the grounded nature of this crew. None of them are heroes, and certainly none of them signed up for this, so their plight is relatable despite its outlandishness.

“Alien” is simply a masterpiece in almost every aspect and is sci-fi at its best. This is a true work of art that shows us where we are heading using fantastic metaphor that is never too over-the-top, conspicuous or didactic, all whilst pushing the boundaries of its craft. It has shown us a world that we can never forget and is pure, horrific inspiration.

Jess is a 21 year old university student studying English Literature. Born and raised in England, she's an aspiring writer and film lover, with a strong affinity for cats.
You might also like
alienJohn HurtSigourney WeaverYaphet Kotto

by Vivek Suvarna on May 18, 2014
H.R.Giger passed away on May 12th, 2014. One of the most influential artists of the 20th century, H.R. Giger changed the landscape of science fiction art direction. Although he will be most remembered for the Xenomorph creature in ‘Alien’ which earned him an Oscar, It was his original artwork “Necronom IV” that caught Ridley Scott’s […]

by Andy Taylor on July 25, 2013
The summer is over (at least it is on this side of the Atlantic where our annual week of blue-skied loveliness has been and gone) and therefore winter is coming, and will be upon us long before we’ve even thought about cleaning the barbeque. But worry not, because there is nothing better than curling up […]
comments
Leave a reply
Add Comment Register

END_OF_DOCUMENT_TOKEN_TO_BE_REPLACED
Taylor Sinople Picks: The 16 Best Films of 2016
Form and Function in Alex Ross Perry’s “Queen of Earth&...
Digging for Fire and Unexpected: Husband and Wife Process Parenthoo...
Every Thing Will Be Fine 3D Review