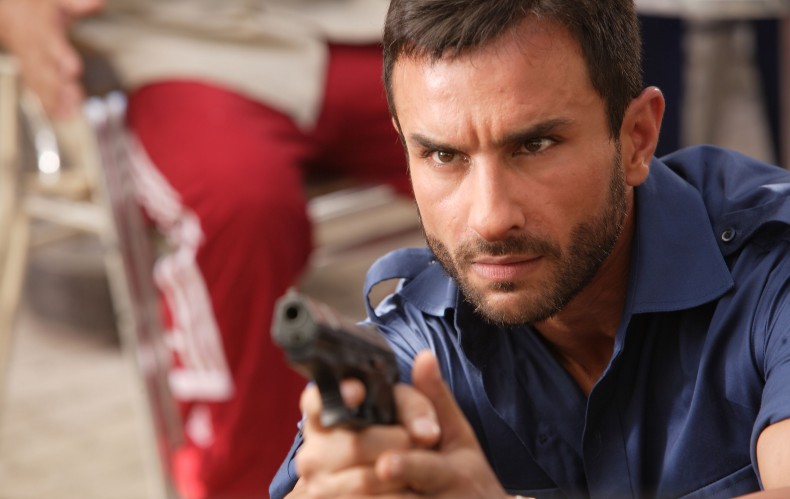 Overall Rating
2.0
2.0
Critic Rating
You have rated this

“Agent Vinod” is a 2012 Hindi action film that attempts to capture some of what makes James Bond and the Bourne series great while failing utterly at creating anything compelling or interesting. While one must applaud it for some of its highly unique and ambitious moments, overall, the film is a dismal, uninteresting failure.
The plot is simultaneously straightforward and convoluted, being predictable while also being baffling. There is a nuclear bomb in a suitcase, and Indian intelligence agent Agent Vinod (Saif Ali Khan) must stop it from falling into the wrong hands and being detonated in Delhi. Along the way, he teams up with a Pakistani agent (Kareena Kapoor), and the two of them work together to try and save Delhi and prevent a nuclear war between India and Pakistan.

The story is straightforward. However, the trouble is that the film itself is over two and a half hours long. During this time, it throws characters in helter skelter, often without introducing them or without any context for why the audience should care about them. Indeed, the motivation for why the grand villain wants to cause a nuclear war remains completely unclear, with the line “I want to cause the death of billions” being the only motivation ever mentioned. While the story of a secret spy saving the world is simple and generic, how “Agent Vinod” goes about it makes no sense, often sacrificing explanation and introduction of characters for shots of exotic locales or of Khan punching shooting something.

Indeed, the film’s editing leaves a great deal to be desired. Often, scenes are edited in such a way that, even if the audience did know which characters were which and why they should care, it’s impossible to tell what’s going. The scenes jump from shot to shot and the story from scene to scene with all the attentiveness and energy of a hyper-active squirrel with fleas. As a result, there is next to no tension as everything that could be a source of tension is resolved two or three minutes later.

There is, however, one scene which stands in stark contrast and which serves as a reminder of what the film could have been. At one point, there is a several minutes long gun fight and chase scene through the lobby of a hotel, done as one continuous, black and white take with romantic piano music and the song “Raabta” playing over it. It is a glorious scene, perfect in its execution and the incongruity between what is scene on screen and what is heard in the lyrics of the song. Unfortunately, this scene serves as the only breath of fresh air in what is otherwise a completely boring and uninteresting film.

Even the music and acting seem to be entirely phoned in. While Kapoor does seem to be trying to play a convincing spy, more often, she comes off as lost and confused, and not necessarily just in character. Khan, too, seems to struggle to come off as anything other than stiff and robotic, though once again, this could be as much a consequence of the poor script as any aspect of Khan’s acting.

Overall, “Agent Vinod” is extremely unimpressive and tedious. While it certainly provides action and gun fights, these things are given with such a lack of context and interest that it’s impossible to take any interest in them or tell who the audience should be caring about. It’s a flawed film with a single moment of glory, but with no redeeming features otherwise.

Janneke Parrish lives in South Korea where she struggles to order pizzas and consoles herself by watching far too many movies.
You might also like
Kareena Kapoor

by Janneke Parrish on May 26, 2014
“Ra.One” is a 2011 Indian superhero film about a video game villain that escapes his game and runs rampant in the real world. It follows the adventures – or misadventures – of video game designer Shekhar Subramaniam (Shah Rukh Khan) as he designs a video game with his son’s (Armaan Verma) preference for an unstoppable […]
Comments
Leave a reply
Add Comment Register

END_OF_DOCUMENT_TOKEN_TO_BE_REPLACED
Taylor Sinople Picks: The 16 Best Films of 2016
Form and Function in Alex Ross Perry’s “Queen of Earth&...
Digging for Fire and Unexpected: Husband and Wife Process Parenthoo...
Every Thing Will Be Fine 3D Review