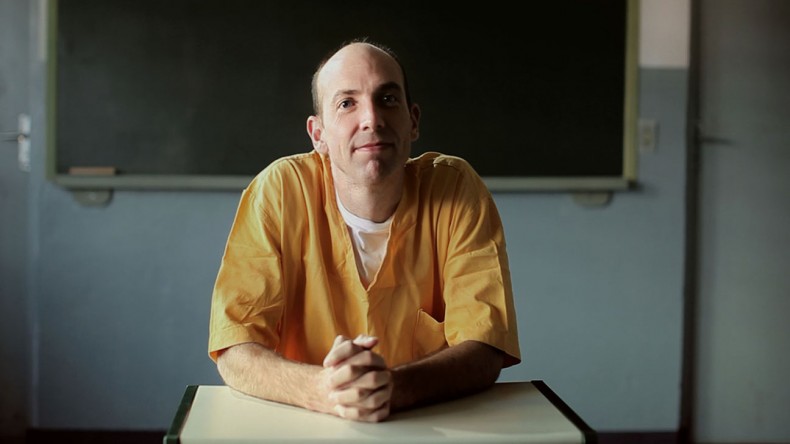 I Touched All Your Stuff is an entertaining and funny documentary that functions less as a retelling of true events and more as an exercise in deceit and the inherent phoniness of a documentary film.

Somewhere between The Imposter and Orson Welles’ F for Fake lies I Touched All Your Stuff, a Brazilian documentary about love, deception, and drug trafficking. Told by the story’s primary suspect, an American named Christopher Kirk, I Touched All Your Stuff drags viewers through a bed of truth, and an even bigger bed of lies, not stopping to let them organize the two into digestible piles, allowing them instead to wallow in the mix of both, unable to blur the line because there was no line in the first place.

Always the adventurer, Chris Kirk decided it would be fun to take a trip down to Colombia, daring to ask the question, “where can the explorer go when it’s all been explored?” While there, he meets a beautiful Colombian-Japanese woman whom he identifies as “V.” He begins a passionate, long-distance love affair with V, one that includes multiple plane rides from both ends and a near constant stream of IMs and emails. Unsure of how a long-distance relationship might work, Kirk agreed anyway because, no matter how he sliced it, V was the most beautiful woman he’d ever dated.

But as their relationship progresses over the next few months, Kirk notices some off V’s odd behaviors. She’s always carrying around two phones, she has odd friends in odd places, and she’s always got copious spending money. Kirk does some digging off her own, and the results are, to say the least, very interesting.

Told entirely from the comfort of a visitation room in a South American prison, Christopher Kirk is undoubtedly a suspicious character. Recounting his side of events with an eerie calm, Kirk describes his escapades with V and the country of Colombia with a fascinating penchant for detail and mood that guides the film through its mostly digital detective work. With very few interviews or scenes of b-roll, I Touched All Your Stuff is comprised almost entirely of Kirk’s interview and files on a computer that he left back in the states. Digging through photos, IM transcripts, and emails, viewers are given an opportunity to, under the equally untrustworthy hands of the film’s two directors, get a good look at the world Kirk had entered once he landed in Colombia for the first time.

However, the film seems less interested in telling Kirk’s story and far more interested in exploring the line between fact and fiction, and discussing the possibility that there is no line at all; that both must co-exist and one is constantly colliding with the other. This isn’t to say that Kirk’s story isn’t fascinating, it is, but it’s fascinating in the way that your closest relative would tell a harrowing story about how they got temporarily lost on their trip to Tokyo. By looking at them in the flesh you know they made it out alive, but it’s still interesting to hear each twist and turn and unexpected reversal that happened along the way. The film’s prologue suggests that Kirk has become a fugitive of the nation, but his reported appearance at the film’s premiere suggests that his decision to flee Sao Paulo had no impact on his life in America.

At its best, I Touched All Your Stuff is a fairly original experimentation on the documentary formula, and its modern aesthetic and steadily evolving narrative should prove to be more than entertaining for anyone looking to fill their true crime quota for the month. There’s nothing particularly revelatory about the film, but it should make for a fun night of viewing with some friends, some drinks, and a willingness to go where Buhler and Mariana want you to go, even if they aren’t sure yet, either.

END_OF_DOCUMENT_TOKEN_TO_BE_REPLACED
Taylor Sinople Picks: The 16 Best Films of 2016
Form and Function in Alex Ross Perry’s “Queen of Earth&...
Digging for Fire and Unexpected: Husband and Wife Process Parenthoo...
Every Thing Will Be Fine 3D Review