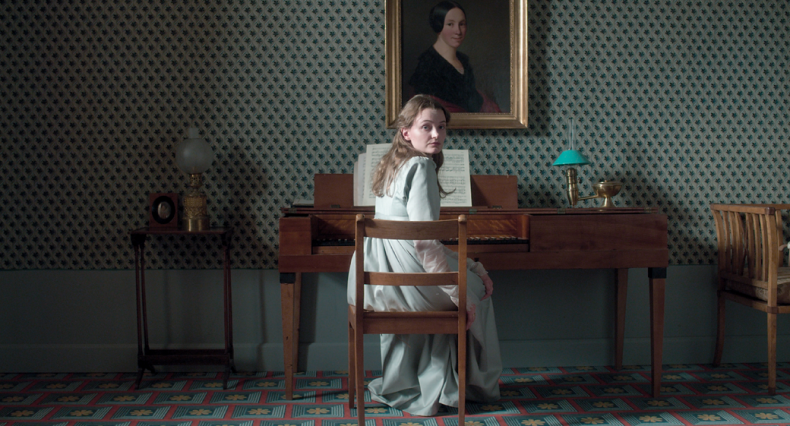 Amour Fou is a funny, cynical costume drama with a wicked sense of humor and an impressive visual palette that offers a master class in how to make a biographical film.

“Would you care to die with me?” is a question asked more than once to more than one person in Jessica Hausner’s Amour Fou, which tells of the German Romantic writer Heinrich von Kleist (Christian Friedel) and his obsession with suicide in union with the one he loves. Having been rejected by his cousin, Marie (Sandra Hueller), Heinrich sets his sights on Henriette (Birte Schnoeink), an unfulfilled wife and unappreciated mother who has recently learned that she is suffering from a fatal tumor. Like Heinrich, Henriette decides that her life should end on her own terms, and she engages in a spiritual affair with Heinrich, planning with him for their mutual departure.

Amour Fou is a beautifully written, expertly acted, and impeccably staged costume drama written and directed by Austrian-born filmmaker Jessica Hausner. Infused with a rich cynicism and some bizarre gender politics, Amour Fou can only be classified as the year’s most unusual romantic comedy. As hilarious as it is artful as it is deeply profound, Amour Fou propels forward with its refusal of any and all classification. Anchored by two astounding performances from Birte Schnoeink and Christian Friedel as soul mates in death, as well as a contender for the year’s strongest cinematography from Martin Gschlacht, the film is beautiful to look at, listen to, and behold in every moment.

But those normally averse to costume dramas, especially foreign ones, need not worry about whether they’ll enjoy Hausner’s film. It’s often the case that a costume drama’s strongest aspects (often costume and art design) are often accompanied with a lack of feeling, leaving the viewer cold and often unsure of what was missing. Perhaps the most surprising aspect of Amour Fou is that it’s genuinely fun to watch. It never takes itself or its characters too seriously, it lays out some digestible thematics to play around with, and, with all of the subtleties and formalities laid throughout, it often feels like a melodrama worthy of reality television, in the best way possible.

A lot of directors seem to forget that human interaction has evolved over time more than it has changed outright, and Hausner reflects this beautifully throughout the film, forcing characters to engage in some politely catty verbal sparring, all under the guise of dignity and good taste. Particularly, much of what comes out of Heinrich’s mouth is just blatantly inappropriate, and Friedel’s performance perfectly balances the necessary traditions upheld by the time with the psyche of a man who just wants to die so aggressively. Throughout the film, Heinrich often looks and acts more like a man hellbent on suicide who can’t find the bullets to load the gun in his hand.

Amour Fou is ultimately an extremely bleak film, one that ends on such a tragic and uncompromising note and refuses to offer much in the way of solace. The film’s final thirty minutes are among the best in any film this year and, if the film isn’t able to maintain a solid momentum through its entire runtime, it is a powerful and resonate film that should play well with audiences looking to deviate from standard fare.

For all of the film’s inherent misanthropy, Hausner never seems like she’s aiming to baffle or outwit her audience at any point. She understands that the beauty of the story is in the nuance and thins out the overarching narrative to make room for the subtleties that emerge as a result. Like Heinrich, Hausner is a poet in her own right, and her film plays as one of the better sardonic tragedies in recent memory.

by Josef Rodriguez on January 12, 2015
I Touched All Your Stuff is an entertaining and funny documentary that functions less as a retelling of true events and more as an exercise in deceit and the inherent phoniness of a documentary film.
Comments
Leave a reply
Add Comment Register

END_OF_DOCUMENT_TOKEN_TO_BE_REPLACED
Taylor Sinople Picks: The 16 Best Films of 2016
Form and Function in Alex Ross Perry’s “Queen of Earth&...
Digging for Fire and Unexpected: Husband and Wife Process Parenthoo...
Every Thing Will Be Fine 3D Review