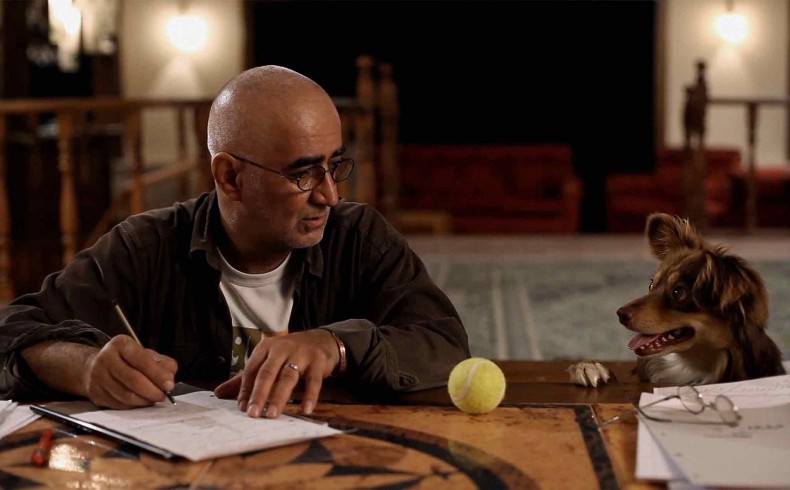 In most forms of art, the potential for varied interpretation is an expected and treasured aspect of the viewing experience. A painter creates with an intimate level of depth – drawing his personal perspective of life into his work in ways that are explained in the title card next to the piece. Filmmakers don’t get the title card. Auteurs and all lovers of film-as-art are at the distinct disadvantage of being part of an industry driven by the looming concept of “entertainment,” a resource consumed by the so-called “general audience.” Refusing to accept a certain degree of ambiguity, as found in other art forms, the general audience calls for complete clarity and transparency from a film’s author. It’s the set-up, the punch line, and the post-joke explanation; the explosion and the extracurricular sex scene. The entertainment machine allows for some influence by an auteur – take Tarantino’s widespread success – but discourages challenging the audience, or withholding an answer to a question. You wonder “who did it,” you find out. You’re surprised, but you find out. The broad pushes aside the narrow. What’s not clear, is whether it is within the filmmaker’s artistic responsibility to assume an audience’s ignorance to the circumstances under which their film has been created, begging the question – at what point does cinema become too personal to pass as entertainment?

Richard Linklater (“Slacker,” “Dazed and Confused”) first conceived his 1995 cult romance “Before Sunrise” after experiencing the events of the film in his own life. Indeed, his story of two strangers – a man from America, a woman from France – who meet on a train and decide to wander the streets of Vienna for a single night, actually happened – although it was in Philadelphia, and markedly less idealistic. Tragically, after losing touch with Linklater, the real-life woman died in a motor accident before being able to see the film, but her impact on Linklater drove him to return to his “what-if” story seven years later with “Before Sunset,” and another seven years later in 2013 with “Before Midnight.” Linklater’s films are coming from a place of deep personal investment, yet the topic of love is something that is easily lent to the entertainment-seeking crowd – thus, his films have been seen and talked about. Similarly, Truffaut’s “The 400 Blows” has found an audience despite its connection to the filmmaker as a mostly-autobiographical, devastating characterization of adolescence. Truffaut’s film has succeeded in its ability to compel regardless of whether or not the viewer is aware that they are watching something autobiographical.

Other auteurs are not so fortunate to have found a balance between art and entertainment. A film such as Ingmar Bergman’s “Cries and Whispers” is a tormented viewing experience in which the general audience will reach for the “off” switch while the art-house goer will find the film lingering in their mind for weeks. Bergman is not Linklater. His films don’t provide an easy footing for which viewers unaccustomed to foreign cinema can step off. Bergman describes his thought process at this time in his life: “…for the first time I did not care in the least whether the result would be a commercial success. And that in these two instances when working in total freedom, I touched wordless secrets that only the cinema can discover.”

While Bergman and Truffaut became legends in the 60’s, a time when what cinema was and who could make it was rapidly changing, contemporary filmmakers are still struggling today to create personal art that entertains. Ming-liang Tsai has been abusing audiences at international festivals in 2013 with his bizarre, demanding film “Stray Dogs” in which the viewer is asked to look at static frames for upwards of ten minutes at a time. Ming-liang and filmmakers like him aren’t interested in entertainment, but in a more lasting achievement. They use each composition as a brush stroke in their outlet of personal expression. These films are isolating, and find niche audiences but will never break through to the common zeitgeist. That’s fine, in most cases. But certain films exist with the potential to change a viewer’s life. Cinephiles use the movies to learn more about their relationship with the world around them. In 2013, one of the most important films of the year will be talked about by few, and seen by even less. It has the condemning restrictions of being both art-house and political, but, with the proper preparation, is a jolt to the viewer’s interpretation of global artistic freedom. While “12 Years a Slave” has gained a very wide audience and much well-deserved award attention for honestly exposing a shameful period in which the rights of many were ignored, there exists a film that exposes an instance of oppression happening today. The trouble? It’s not made by a pop culture icon, and it doesn’t have the marketing budget to reach the general audience. It is but one painting in a stack created by van Gogh’s neighbor.

Celebrated Iranian New Wave auteur Jafar Panahi was once traveling the world with his films and collaborating with fellow Iranian paragon Abbas Kiarostami (both artists’ films have been banned in Iran for over a decade). Those days were ended in 2010, when Panahi was infamously arrested. In a shocking ruling, his films were declared “propaganda used against the Islamic Republic” – he was sentenced to six years imprisonment and banishment from traveling abroad or making films for 20 years. After a great outcry from filmmakers and critics alike, Panahi resurfaced in 2011 with the video-diary documentary “This Is Not a Film” which was shot on an iPhone and smuggled out of Iran on a flash-drive hidden in a cake to be shown at Cannes. Now three years after the initial sentencing, and still under house arrest, Panahi returns again with his first post-ban narrative film.

While Fellini’s brilliant “8 ½” brought to life the mental impact of the walls-closing-in effect of writer’s block, Panahi keeps the receding walls at bay with “Closed Curtain” and explores the mind of a filmmaker who lacks not ideas, but the means to produce them. Both filmmakers use their art as a powerful, personal outlet of inner frustration, but Panahi’s work comes with an extraordinary sense of risk.

Shot in secrecy in his own home with a barebones crew, “Closed Curtain,” from the first frame, places the viewer firmly in the confinement of artistic oppression. We open on the sea, viewed from behind the bars of a security fence as a taxi arrives to drop off a man with a duffel bag. Looking out from the barred window, we watch him wind his way up the front drive and enter the home before sharply closing thick curtains on the glass – the first taste of the blend of literal and figurative poeticism Panahi aspires to create with this fictional-documentary reality-bender.

The man from the taxi (played by co-director Kambuzia Partovi) turns out to be a screenwriter who is shutting himself into the spacious, wooden Iranian home in order to write in peace and hide the contents of his duffel bag. He unzips the bag and a small dog pops his head out. A TV report mentions the recent ban of domestic dog ownership. As the man settles in, his isolated peace is interrupted by a series of intrusions that include a suicidal stranger (Maryam Moqadam), thieves, and director Jafar Panahi himself. As “Closed Curtain” goes on, its once traditional narrative of the man with the secret dog becomes warped by Panahi’s presence in the film. The fictional elements of the story begin to crumble under a suddenly documentative shift that follows Panahi’s melancholic struggle with being unable to make movies.

There’s something so absorbing about the duality of character and creator both hiding in this home and covering the windows to protect themselves from oppression. What begins as a traditional narrative becomes something beautifully open to interpretation and multiple conclusions.

As crucial a cinematic essay as “Closed Curtain” is, it’s doomed from universal acclaim because it functions only as a successful movie should the viewer have put in the time to research Panahi and the history of Iranian arts culture prior to the screening. Without this insight, “Closed Curtain” won’t do much to impress – it doesn’t connect on a broad level. Panahi hinges a major turning point in the film on the assumption that you will know what he looks like, so that when he appears in his own film the audience will recognize him. He’s asking a lot, but there’s no question of his bravery in actually making this movie.

Government persecution of the kind Panahi has faced can easily be reduced to an antiquated history lesson – a thing that could never happen from an American perspective and with the pervasiveness of modern technology. At genuine risk of further persecution, Panahi refuses to halt the creation of his art. He uses the cinematic medium without desire to sell a movie but simply to make one. Because it is therapy. Because it is a vital necessity to the auteur. There is nothing overtly emotional about the story in “Closed Curtain,” and yet a sense of desperation and longing appears in every scene. A friend, suspecting his sadness, reminds Panahi that there is more to life than work. “Yes,” he responds “but those things are foreign to me.” “Closed Curtain” should close every film festival in the world this year. Rarely has more validation been given to Godard’s famous and disputed quote: “Photography is truth, and cinema is truth 24 times per second.”

All film viewers, from megaplex to art-house, go to the movies under some pretense of entertainment. Panahi is not forgoing all enjoyment – there are layered, thoughtful compositions and a poignant, thought-provoking ending that isn’t overly open-ended. He does, however, veer well off the course of traditional fare when he follows through on producing a film that can only be truly recognized, appreciated, and understood through the research of the filmmaker’s plight. Should a filmgoer, even one with a taste for the ostentatious, wander into a screening of “Closed Curtain” unaware of who made the film, they would likely find it bemusing and respond with significantly less enthusiasm than a more educated viewer. Is it unfair to require an educated viewer? Likely no more unfair than it would be to lower the film’s rating based on an assumption of other’s experience with the film rather than one’s own. It is enigmatic to the critic. Italy had a neorealist movement, France and Iran had waves, and America discovered a New Hollywood, but none of these revolutions seem to have made much impact on the American perspective of the art film in a broad context. It’s entertainment over art, and as long the system caters to the former, contemporary auteurs will have to get by on the hope that personal, intellectual films will one day find a lasting place in the mainstream.

Taylor is a Chicago-based writer and aspiring film historian. He is the editor here at TFP, and has contributed to a number of international publications such as Cinema Scandinavia, PopMatters, and Room 101 Magazine. He can also be found listening to podcasts, researching topics he has little use for, or running after a city bus.
You might also like
art-houseclosed curtainJafar Panahirichard linklater

by Taylor Sinople on October 11, 2013
The Chicago International Film Festival runs October 10th-24th for its 49th presentation of an eclectic array of independent, foreign, and festival favorite films. Featured are nearly 200 films that offer a broad showcase of international cinema from over 60 countries. Many of the bigger, essential festival films from around the world (Cannes Palm d’Or winner […]
comments
Leave a reply
Add Comment Register

END_OF_DOCUMENT_TOKEN_TO_BE_REPLACED
Taylor Sinople Picks: The 16 Best Films of 2016
Form and Function in Alex Ross Perry’s “Queen of Earth&...
Digging for Fire and Unexpected: Husband and Wife Process Parenthoo...
Every Thing Will Be Fine 3D Review