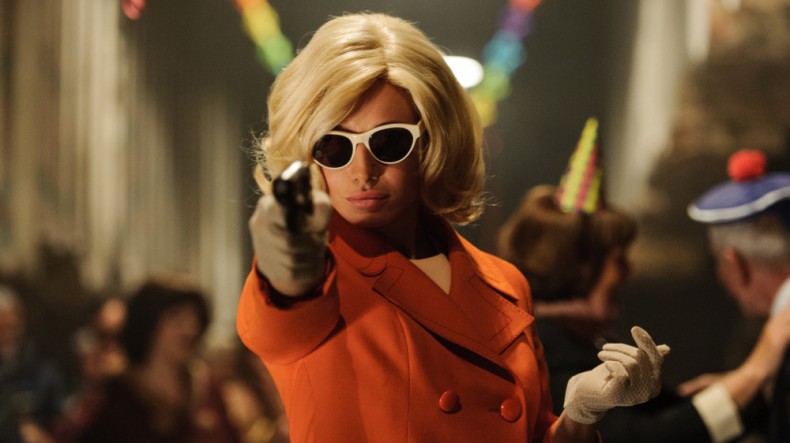 Gisela Werler labors over towering machines in a dingy wallpaper plant while secretly longing for the beauty of her boss’s long legged, red-lipped secretary. When Gisela (Nadeshda Brennicke) meets a thief by the name of Peter (Charly Hübner), she falls in love and begs him to let her into his life of crime. Sitting outside their first mark – a small, local bank – Peter warns the mousy, unimposing woman, “If you go in there now, you will come out a different person.” It’s easy to understand how this may be exactly what Gisela would want.

Strutting up to the bank teller in a lavish, blonde wig and Hollywood movie star sunglasses, Gisela’s alter ego takes over as she pulls out a pistol and says “money, please.” The public glorifies her, the media deems her the Banklady, and Kommissar Fischer (Ken Duken) (a fresh detective on his first case) makes it his personal obsession to apprehend her. “Banklady” explores transformation, narrow escapes, and discovering love in grand larceny.

Lead actress Brennicke found director Christian Alvart (“Antibodies”) after seeing a documentary on Werler’s life and feeling a desire to bring her incredibly untold story to the screen. She says in a post-screening Q&A, “I think the most interesting thing is that this story is absolutely true. I was amazed when I found out that this story had never been filmed before.”

The “Banklady” screening halfway through the two-week Chicago International Film Festival was one of the most successful yet with great attendance by a mostly older audience. After the screening, the audience remarked on being unexpectedly engaged with Gisela and Peter’s rocky relationship and thrilled by the overall presentation of the material. History serves this cinematic adaptation well, as the true story itself is full of the types of twists and reversals that movies are made to tell. As Brennicke goes on to explain, the only facts altered were the specific locations of certain events and a nod at the film’s biggest influences by the inclusion of a tommy gun. The rest is a delightfully accurate story of romance and stolen money that escalates to a perfect grey-area of success and failure.

Dynamic camera movement and editing give different sections of the film totally varying feels. Gisela’s nerve-wracking first robbery plays out in shaky handheld and wild crane movements, but as she becomes more comfortable with the process the cameras steady themselves too and eventually end up mostly still in her commanding presence. A standout scene gets creative with the typical montage technique by incorporating typography and graphic design into a split-screen effect that moves the timeline along in one beautiful sequence.

“Banklady” is a perfect date night movie – it’s a cops-and-robbers action-drama with a realistic 1960’s setting, and has a surprisingly effective romance that sneaks up on you in its authenticity and imperfection. While no lovers-in-crime film may ever transcend the timelessness of “Bonnie and Clyde,” the true story of the Banklady turns out to be the more fascinating one.

Note: “Banklady” has been acquired by Global Screen for international distribution in early 2014.

Taylor is a Chicago-based writer and aspiring film historian. He is the editor here at TFP, and has contributed to a number of international publications such as Cinema Scandinavia, PopMatters, and Room 101 Magazine. He can also be found listening to podcasts, researching topics he has little use for, or running after a city bus.
You might also like
ciffCrimeHeists