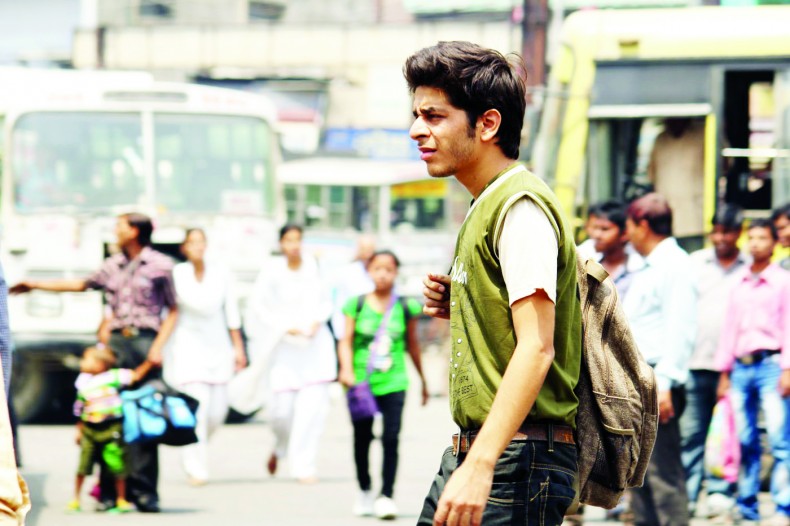 Kanu Behl makes a noteworthy directorial debut with this tense and grim Dehli-set crime drama. The film opens with Titli (Shashank Arora), the youngest of three brothers living in the slums of Dehli, considering a major investment that will break him out of a cycle of crime and poverty. But after he’s arrested, the police steal 300,000 rupees from him – all the money he has – and he’s forced to return to his violent older brother (Ranvir Shorey) whose latest scheme involves an arranged marriage to Neelu (Shivani Raghuvanshi) – a young woman who Titli makes a deal with that will allow them both to escape.

The gritty image is immediately striking as Behl introduces us to the cracked walls and dense streets of New Dehli. Siddharth Diwan shot the film on 16mm, and the grainy, rough format is a thrilling change of pace in a festival dominated by clean, digital workflows and images. The 16mm stock offers a distinct, timeless look when capturing the pink cement walls of Titli’s small home as well as all the greens, oranges, and purples of Indian fashion. Considering several of Behl’s lead actors are first-timers, it’s especially bold of him to go with a limited format (shooting on film today comes with the constant awareness that the meter is running during every take). It’s the right look, though. A digital image – even one roughed up in post – simply wouldn’t have captured this story that touches on domestic abuse, small and big-time crime, and ethical dilemmas, in the truest way.

Arora, who plays Titli, gives a patient, vulnerable performance – doing his best to avoid manipulating others but finding himself unable to succeed without doing so. Raghuvanshi, Titli’s bride by obligation, is eye-drawing as a woman attempting to show strength in a culture that gives her no power. Together, under Behl’s direction, they root the noir and thriller elements of the film in a believable, emotional sense of realism. Watch for the progression of the way Neelu rides with Titli on his scooter for a nice culmination of strong performances and direction.

There are a few shots in which the focus is completely buzzed, and Behl could have tightened up the story a bit (it runs a little over two hours), but for a debut film this is wonderfully promising and a real contender in the Chicago International Film Festival’s “New Directors” competition.

END_OF_DOCUMENT_TOKEN_TO_BE_REPLACED
Taylor Sinople Picks: The 16 Best Films of 2016
Form and Function in Alex Ross Perry’s “Queen of Earth&...
Digging for Fire and Unexpected: Husband and Wife Process Parenthoo...
Every Thing Will Be Fine 3D Review