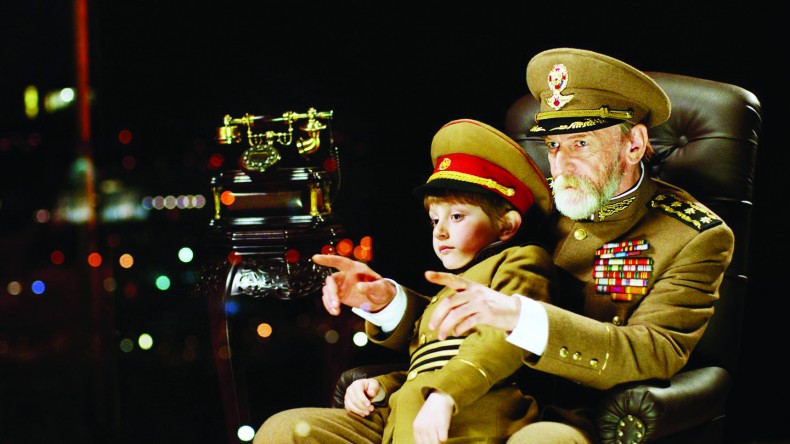 Directed by Iranian-born Mohsen Makhmalbaf, “The President” feels like the ultimate international film – an opening title reveals the film to be set in an “unknown city” and from there, modern revolutionary parallels unfold. Having a child at the center of this wartime film is reminiscent of “Ivan’s Childhood” via Tarkovsky; flashback scenes taking place in the President’s palace bring “Russian Ark” to mind; the sea as a setting for resolution recalls Fellini among others; and then there was a fellow audience member’s mention of Sacha Baron Cohen’s “The Dictator.”

With that in mind, the film is your traditional journey story, following the President (Misha Gomiashvili) and His Royal Highness (five-year-old Dachi Orvelashvili) on their way to find sanctuary, featuring various supporting characters along the way. At the same time, there are some innovative, if not pleasing, cinematic elements at play. There’s the consistently striking presentation of landscapes and architecture and the propaganda imagery, namely an official portrait of Gomiashvili’s President that is frequently the main focus of any frame. As the story progresses, this image is manipulated in one way or another and begins to serve as its own character in place of the President’s fading flesh-and-blood identity.

More interesting is Makhmalbaf’s use of song and dance throughout the film – in order to survive, the President and his grandson spend the majority of the time disguised as street musicians. Perhaps going along with the idea of satire, the film includes well-orchestrated choreography through different chorus lines of military men that guide Orvelashvili’s character into a limo, drive the President away from his helicopter shortly after a welcoming ceremony, and force full-body searches on a row of innocent citizens while singing a traditional children’s tune. The most joyfully entertaining moments in the film revolve around song and dance, including a flashback to dancing lessons at the palace and an encounter with a guitar-playing, Jack Black-type character in a brothel. At the film’s close, one of the revolutionaries demands his dwindling leader to “dance for democracy”; the final shot of the film shows young Orvelashvili dancing in the sea.

With all of this, it’s the performances by Gomiashvili and Orvelashvili that supply the film’s backbone. As two spoiled heirs, the President and His Royal Highness are equally naïve, with the President’s corruption often challenged by the boy’s innocent inquiries. The generational gap between grandfather and grandson argues for the cyclical nature of such a political landscape and mindset by constant mirroring – the two are introduced to us in the same uniform, along with similar dialogue, both in wording and child-like delivery. Even their identities, alone and in relation to each other, are a central component to survival and therefore, a source of confusion. It’s not exactly “Waiting for Godot” or “Rosencrantz and Guildenstern are Dead” (although arguably, the President excuses their disguises as a “play” and a “game”), but their titles are frequently adjusted throughout the film. The grandson is not only a reflection of the President, but his constant problem and eventual resolution. In the end, what “The President” accomplishes is not only political commentary, but also a balanced mixture of contrasting emotions in a simple blood relationship that also just happens to be a political one. “The President” is captivating at the very least, as Makhmalbaf utilizes all these elements to connect the past, present, and future.

However, the characterization of the film’s namesake as he plays a dual role is slightly unclear even as he is exposed to different characters during his journey. In general, the perspective intended for the audience shifts back and forth: who are we supposed to feel sympathy towards, if anyone at all? Who or what has actually changed?

Jazmine is a business student, aspiring producer, and former anglophile who only thinks in rock music references and cult film quotes. Usually situated somewhere in the state of Illinois, she only leaves her apartment for long-distance adventures, when there's absolutely no food left to eat, or when existential crises strike.
Comments
Leave a reply
Add Comment Register

END_OF_DOCUMENT_TOKEN_TO_BE_REPLACED
Taylor Sinople Picks: The 16 Best Films of 2016
Form and Function in Alex Ross Perry’s “Queen of Earth&...
Digging for Fire and Unexpected: Husband and Wife Process Parenthoo...
Every Thing Will Be Fine 3D Review