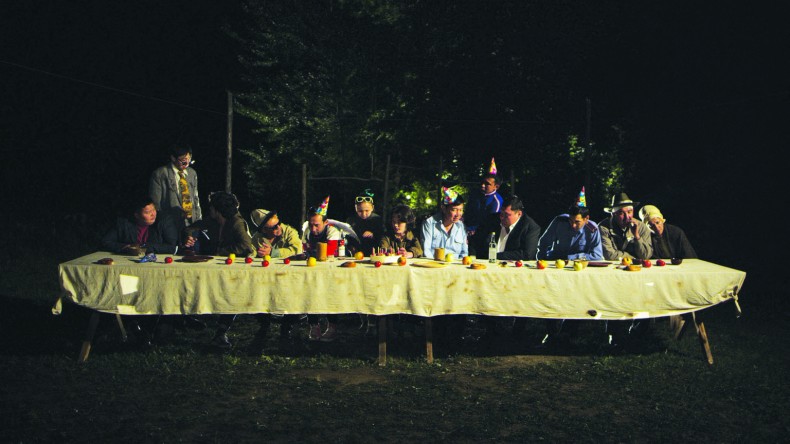 Say goodbye to law and order when you make trouble with the police chief’s brother in a remote village in Kazakhstan. 25-year-old John (Aidyn Sakhaman) runs into money trouble living in a big city and is forced to retreat to a shack his mother used to live in ten years ago. He takes his teenaged brother Yerbol (Yerbolat Yerzhan) and epileptic 12-year-old sister Aliya (Aliya Zainalova) to the small town in the hills only to find that Zhuba (Bauyrzhan Kaptagai), a drunken local, has been living on his property for years. John explains that he owns the lot, but Zhuba isn’t leaving, not peacefully at least.

“The Owners” is a visually bizarre post-Soviet tale of familial protection with random outbursts of song and dance. Director Adilkhan Yerzhanov establishes himself in the film festival circuit this year as a bold surrealist. A milky look downgrades the look of the film and causes even the darkest shadows to remain a light grey when they need to be a silky black to sell some of the candle-lit scenes. Behind the color correction issues is an exciting approach to on-set lighting.

As John pleads for help to keep his family from becoming homeless, he visits the police, who turn out to be a few guys in blue shirts, and the local court, which turns out to be little more than a file cabinet and a man that says, “we’ll contact you within two months.” In step with the surrealistic breaks of reality, the lighting in these scenes is motivated more by the aesthetics of tragedy than by any attempt at realism. I often take issue with fantasy sequences when they aren’t linked to the narrative, but when the presentation of the entire narrative is fantastical it’s refreshing to see a director creating his own reality, not imitating ours. Yerzhanov plays with spontaneous dance sequences, and the image occasionally slips into a notable work of art – like Caravaggio’s “Calling of Saint Matthew,” or the more recognizable “Last Supper” dining arrangement.

As Aliya falls ill and John winds up in jail, the story becomes more and more grim as the cinematography becomes more and more beautiful. It all arrives at a stunning shot of a hollowed out, painted car in a field. Yerzhanov achieves all of this weirdness by simply decorating his surroundings in the Kazakhstani countryside. The surrealism greatly increased my interest with the film as it went on, but also acted as an inhibitor to my emotional connection with the story. I spoke with someone after the screening that mentioned that the character’s occasional use of the Russian language is crucial to understanding the comedy. That angle was completely lost on me, but as I saw it “The Owners” is a visually attractive change of pace and a promising premonition of an even better alignment of story and style that I hope to see from Yerzhanov in the future.

END_OF_DOCUMENT_TOKEN_TO_BE_REPLACED
Taylor Sinople Picks: The 16 Best Films of 2016
Form and Function in Alex Ross Perry’s “Queen of Earth&...
Digging for Fire and Unexpected: Husband and Wife Process Parenthoo...
Every Thing Will Be Fine 3D Review