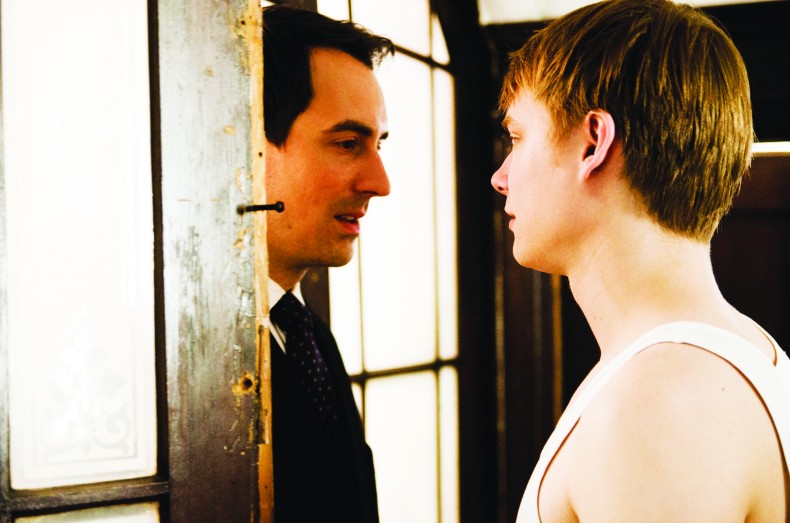 Paragraph 175 may have criminalized homosexuality in post-war Germany, but that didn’t stop many gay men from jumping the border to Zurich, Switzerland. There, with the right contacts, one could join Der Kreis (The Circle): an underground magazine that published essays and illustrations for gay men and hosted secret parties. Of the 2,000 subscribers to The Circle, two – a young man teaching at an all-girls school, and an eighteen-year-old cross-dresser – are the subject of this touching documentary by Stefan Haupt.

Haupt had, at different times in his life, attempted to produce both a documentary and a narrative period piece drama based on the lives of Ernst and Röbi, but it wasn’t until he proposed combining both techniques that the film was finally financed.

Ernst and Röbi, still alive and celebrating 58 years together, guide the film with stories of their experiences with The Circle, which seamlessly bleed into the narrative portions of the film. These are not simple dramatizations but rather a full-fledged cinematic production on par with any period piece drama you would expect to see in theaters today.

The story picks up in 1956 when Ernst (played by Matthias Hungerbühler) first meets Röbi (played by first time actor Sven Schelker) and follows their relationship as police brutality and prostitution turn the public opinion against The Circle. Haupt acknowledges the dangerously indiscriminate nature of the gay scene at the time, but purports that the dominant ideology (as set by Circle leader Rolf) favored long-term partnerships over one-night stands.

The real-life Ernst and Röbi vividly and adorably recall their experiences together. Footage from a recent production shows Röbi performing, to this day, in drag. This humbly told story of personal and world history is one of the best love stories of the year, and an inspired choice for the Swiss submission to the 87th Academy Awards.

by Taylor Sinople on October 10, 2014
Viviane doesn’t love her husband any more; in fact she hates him. But until her husband is willing to grant her a divorce, she’ll be ordered by the Israeli court to remain, imprisoned, in her marriage. This emotionally involving chamber piece takes place entirely in the courtroom as Viviane (played by Ronit Elkabetz, who co-directs […]
comments
Leave a reply
Add Comment Register

END_OF_DOCUMENT_TOKEN_TO_BE_REPLACED
Taylor Sinople Picks: The 16 Best Films of 2016
Form and Function in Alex Ross Perry’s “Queen of Earth&...
Digging for Fire and Unexpected: Husband and Wife Process Parenthoo...
Every Thing Will Be Fine 3D Review