CIFF 2014: The 100-Year-Old Man Who Climbed Out the Window and Disappeared Review 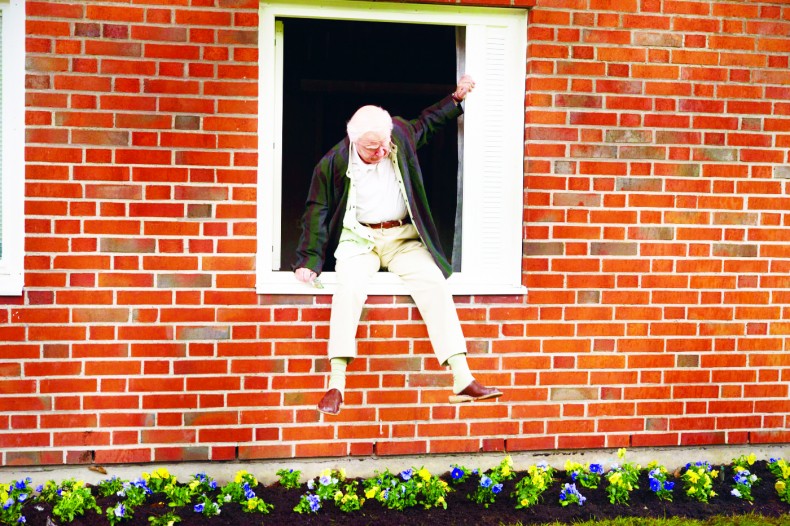 Tim Burton’s “Big Fish” meets Alexander Payne’s “Nebraska” meets a barrel of dynamite in “The 100 Year Old Man Who Climbed Out the Window and Disappeared,” a Swedish comedy-adventure as ridiculous as its title.

When we meet 99-year-old Allan (Robert Gustafsson), he’s tying sausages to sticks of dynamite to get revenge on the fox that killed his cat and promptly, as he puts it, blasts his way right into the nursing home. On his 100th birthday, without putting much thought to it, he climbs out his window and takes the next bus to wherever his pocket of change will take him – launching a series of events that will make him the target of an international crime boss. Allan is no stranger to bizarre events though; his early fascination with explosives had him stumbling his way into world history for decades. He saved Franco’s life, partied with Stalin, and contributed a helpful tip to the Manhattan Project. No, being on the lam with a suitcase full of cash at 100 years old is about what Allan has come to expect from his life.

“The 100 Year Old Man” is so completely over the top and hugely ambitious that it almost seems out of place amongst festival fare. Director Felix Herngren spares no cost to put exactly what he wants on screen (the budget came to an estimated $8.7m). Allan’s storied past is illuminated through hilarious flashbacks, and some of the work that the crew put in to achieving throw-away gags is frankly incredible. Allan mentions at one point that people have been shouting at him his entire life, which cues up a rapid montage of dozens of people screaming at the camera – each with their own costume and circumstantial setting. Allan makes an off-hand comment about his father traveling to Russia to publicly speak on the benefits of contraceptives, and we go there to early 20th century Russia and see how that unfolds. Herngren’s film is one slack-jawed moment of absurdity after another. It all amounts to a truly epic tale and the outright funniest film screened at the festival.

50-year-old Gustafsson plays a younger Allan in the flashbacks and then doubles his age with prosthetics and make-up to play our present-day Allan at 100 years old. No doubt Gustafsson spent innumerable hours in the make-up chair before shooting, but it all pays off to see a singular performance throughout Allan’s life.

A whimsical score with a walking trombone backs the adventure, and a number of editing tricks make “The 100 Year Old Man” spectacularly fun to watch. Herngren and co-writer Hans Ingemansson, working off Jonas Jonasson’s novel, don’t bite off much in terms of deeper themes, and I’m not sure they need to in this case, but it does leave the film as an undeniable piece of eye-candy that’s admittedly low calorie in depth.

Note: “The 100 Year Old Man Who Climbed Out the Window and Disappeared” was given an encore screening at the 50th Chicago International Film Festival due to popular demand.

END_OF_DOCUMENT_TOKEN_TO_BE_REPLACED
Taylor Sinople Picks: The 16 Best Films of 2016
Form and Function in Alex Ross Perry’s “Queen of Earth&...
Digging for Fire and Unexpected: Husband and Wife Process Parenthoo...
Every Thing Will Be Fine 3D Review