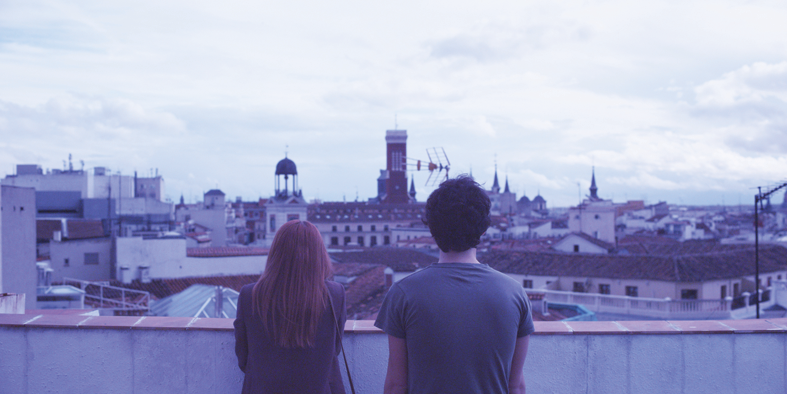 In Richard Linklater’s walk-and-talk romance “Before Sunrise,” an American traveling through Europe meets a French woman on a train and they agree to get off in Vienna and explore the city together all night. It’s a beautiful, fantasy-fulfilling romance about chance love and good conversation – a one-in-a-hundred connection between two soul mates. “Stockholm” is about what happens the other 99% of the time.

The Girl walks home, and the Boy follows, insisting he’s fallen in love with her at first sight. The Girl starts to come around to his confidence and even finds it a little bit charming – or is he just wearing her down?

Director Rodrigo Sorogoyen (known for his TV work in Spain) deconstructs the behavior that leads to one-night stands in this warped, genre-bending sort-of romance. “Stockholm” has two distinct halves, and two genres at play, but it doesn’t give you “twice” the movie.

The first piece – our city-wandering romance – carries some intrigue due to the shifting boundaries between Pereira and Garrido. Their relationship as strangers alternates between flirtation and annoyance, and we’re unsure whether to fall for Pereira’s charm, whether this is meant-to-be or predator-prey. The night-time streets of Madrid are the highlight here, but we’re somewhat robbed of the full beauty of the city due to a frustratingly shallow depth of field that provides us a look at only the immediate surroundings of the characters. A foreboding score backs the scenes of the budding romance, suggesting trouble to come.

The second, less successful half, shifts to psychological thriller territory and takes place entirely in an interior apartment. This portion of the film is better shot, but quickly deflates the tension built in the first piece. Worse, the ending comes off as completely unjustified – a melodramatic twist motivated more by the writer wanting to write it than by it actually being called for by the story.

Pereira and Garrido, both known for past television roles, were quickly hired onto the production, which shot for only twelve days and utilized the director’s own apartment as a major set. Part of what works in the film is the realistic sense that two strangers are getting to know each other on-screen, and Sorogoyen notes that this was captured so well because it was real – the two actors had requested further rehearsal time, but the production couldn’t afford it.

“Stockholm” is a strong start in cinema for Sorogoyen, and a fine twist on the walk-and-talk romance, but its final act is too writer-y to fit in among what was previously established as a realism-minded drama. Sorogoyen remarked that he originally conceived this story as a short film but realized it had the legs to make it as a feature. This logic might have somewhat backfired. I can see “Stockholm” as an Oscar-nominated short – it plays with genre and subverts a slew of expectations – but the feature length just runs too long in order to fulfill a screenplay that feels well-written, but spawned from a writer’s workshop.

END_OF_DOCUMENT_TOKEN_TO_BE_REPLACED
Taylor Sinople Picks: The 16 Best Films of 2016
Form and Function in Alex Ross Perry’s “Queen of Earth&...
Digging for Fire and Unexpected: Husband and Wife Process Parenthoo...
Every Thing Will Be Fine 3D Review