CIFF 2014: Stations of the Cross Review 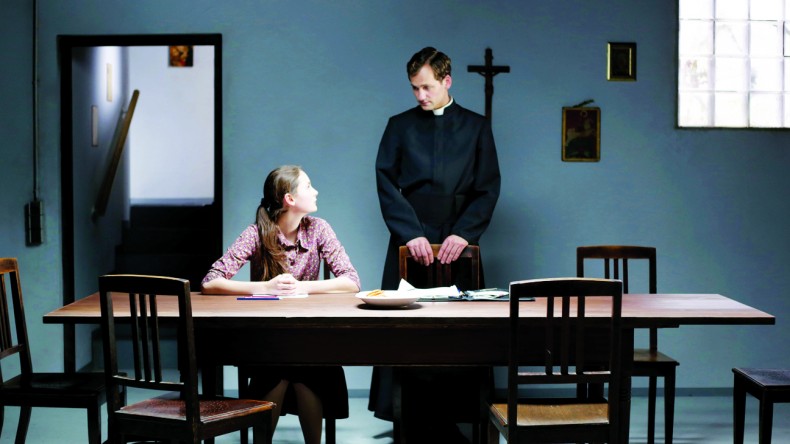 At a time when even the Vatican is grinding towards a more liberal outlook, the unforgettable “Stations of the Cross” provides a fist-clenched, pit-in-your-stomach reminder of the power of religious fundamentalism.

Fourteen scenes, each unfolding in only a single shot, tell the story of Maria (Lea van Acken), a fourteen-year-old student and committed member of her fundamentalist Catholic parish. Maria is being raised in the modern world, but under an education by her church and parents that teach a literal interpretation of the bible. Her understanding of religion stretches as far as to, at the demands of her mother (Franziska Weisz), reject the “satanic rhythms” of rock, pop, and even gospel music and, at the request of her priest (Florian Stetter), give up everyday pleasures such as clothing and dessert in order to offer sacrifices to Christ.

The fourteen scenes, each of which are captured in a single take running five to fifteen minutes, are titled with the fourteen Stations of the Cross (the stages of Christ’s crucifixion as featured in artistic renderings). Conflict arises when Maria meets a boy at school (Georg Wesch) and falls into an internal crisis fueled by guilt and fear of her volatile mother.

Weisz is a frightening presence on-screen as a woman whose absolute commitment to a theology is paired with a self-imposed ignorance to other ways of life. Rising German talent Florian Stetter (“Beloved Sisters”) plays a priest whose kind face can distract from the fact that he teaches children a 2,000-year history of the world. Most impressive of all, though, is young van Acken who is prolific in her on-screen performance. Together, the cast of adults and children run through dialogue that stretches past fifteen minutes a take – dialogue that features characters talking over one another, changing topics, arguing, and moving about the frame. A moving car-shot is inserted at just the right moment, and the pacing is never harmed by the aesthetic choices. It’s a fascinatingly complex presentation stuffed into the simplicity of a “14-shot film.”

Dietrich Brüggemann (“Run If You Can”) directs and co-writes with his sister Anna. Let’s hope this is an international breakout film for the both of them, as they deserve financing for a dozen more films. “Stations of the Cross” is one of the most arresting pieces of work, of any medium, I’ve ever seen. It’s a powerful indictment of religious extremism that’s as provocative as it is deeply upsetting. Brüggemann isn’t condemning religion altogether here, making this a must-see discussion piece for viewers of all faiths. Just don’t bring a fundamentalist – by the end they’ll have big problems with the film and you’ll have big problems with them.

Taylor is a Chicago-based writer and aspiring film historian. He is the editor here at TFP, and has contributed to a number of international publications such as Cinema Scandinavia, PopMatters, and Room 101 Magazine. He can also be found listening to podcasts, researching topics he has little use for, or running after a city bus.
You might also like
ciff 2014Florian StetterStations of the Cross

by Taylor Sinople on October 19, 2014
“Ablations” is a black comedy full of surrealistic departures and stunning art direction unmotivated by its plot, begging the question “but why?” to which director Arnold de Parscau seems to shrug, “why not?” Benoît Delépine (“Avida,” “Aaltra”) wrote the screenplay and builds a navigable mystery in the first act. We’ve got an event that can’t […]
comments
Leave a reply
Add Comment Register

END_OF_DOCUMENT_TOKEN_TO_BE_REPLACED
Taylor Sinople Picks: The 16 Best Films of 2016
Form and Function in Alex Ross Perry’s “Queen of Earth&...
Digging for Fire and Unexpected: Husband and Wife Process Parenthoo...
Every Thing Will Be Fine 3D Review