CIFF 2014: Something Must Break Review 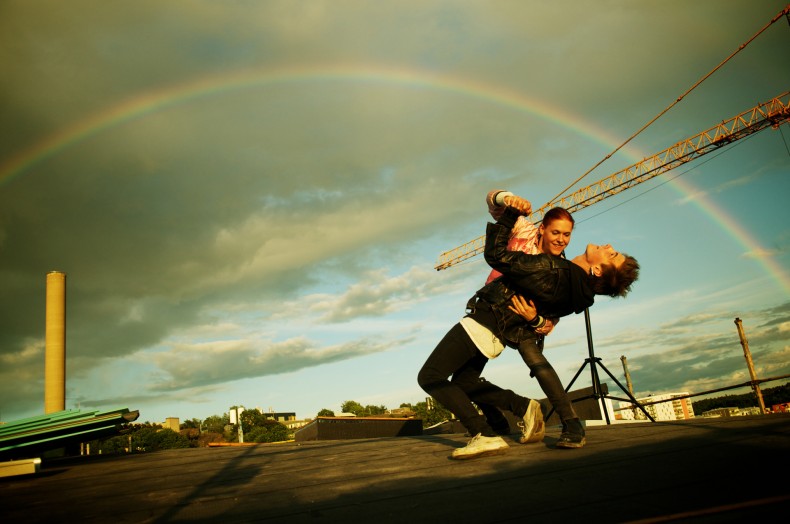 “Something Must Break” lifts its title from the Joy Division song of the same name and repurposes the duality Ian Curtis was pondering before his death in 1980, “Two ways to choose / Which way to go / Had thoughts for one / Designs for both.” Early on in the film, Sebastian (Saga Becker) promises, “I will soon disappear.” With long, braided hair, a petite frame, and careful use of make-up, Sebastian isn’t just looking to pass for Ellie – his internal female identity – he’s looking to become her.

Transgender writer-director Ester Martin Bergsmark had previously only worked in documentaries (“She Male Snails”) but comes onto the narrative scene with a loud, dysphoric “bang.” Bergsmark shot “Something Must Break” digitally on a Canon 7D, but you’d swear it were 16mm. A dirty, rough image captured with a mostly handheld camera causes some real unease when matched against the desaturated, urban Swedish setting and the excellent sound design that hones in on and amplifies room tones. Lyrical sequences filled with beautiful, dark images punctuate story segments. Bergsmark seems to be motivated by music video aesthetics and brings in a dancey electronic soundtrack.

Sebastian, androgynous in appearance, wanders the city and is drawn towards darkness and pain. “Piss in my mouth if it’ll make you love me.” There’s a lot of tension to Sebastian’s pursuing of men; it can get dangerous when who you are may be someone others reject or even hate. Andreas (Iggy Malmborg), a leather jacket donning punk, interrupts a violent altercation and helps Sebastian escape and the two begin seeing each other. “I’m not gay,” Andreas declares. “I’m not either,” Sebastian/Ellie says.

Because Sebastian is acting as Ellie, their relationship isn’t much different than a heterosexual one other than Andreas’s wavering comfort with the male body. Together, they push their sex to extremes – slapping and cutting each other – and crawl the city with the freeing wind of rebellious youth.

40 minutes in, we become so immersed in this alternative world that when Sebastian/Ellie runs into some of Andreas’s friends who live a more traditional lifestyle we ourselves feel out of place among them. Becker, as a non-professional actor, is more vulnerable on-screen than a trained actor playing a role could possibly achieve. His feminine performance is confusing, and stretches go by where we forget this is a two-man relationship, only to be reminded by graphic sequences that depict Sebastian/Ellie engaging in random sex, usually with more than one man. Two such sequences are disturbing in their implications of abuse but stunningly photographed in extreme slow motion. It’s this alternation and meshing of ugliness and beauty that makes “Something Must Break” so hard to tear your eyes from. Andreas summarizes the tone in a single, unforgettable line, “You’re so beautiful it makes me want to throw up.”

Chris Jones, reviewing Joy Division’s album “Still” for BBC Music, writes, “All that we have left is the sepulchral voice, the snatches of Ballardian existentialism and the eerie electronic undertow. It’s more than enough for most people. But beginners would be wise to start with their two proper studio albums.” “Something Must Break,” too, is a bit alienating in its nudity and depictions of intercourse, but beyond that is an unflinching, screwed-up, wholly involving story from a director who is working towards achieving the visual confidence of early Aronofsky. Bergsmark may appear to have an over-reliance on image, but there’s a suitable irony to capturing a character that many look away from with a style that screams, “Look at me!”

END_OF_DOCUMENT_TOKEN_TO_BE_REPLACED
Taylor Sinople Picks: The 16 Best Films of 2016
Form and Function in Alex Ross Perry’s “Queen of Earth&...
Digging for Fire and Unexpected: Husband and Wife Process Parenthoo...
Every Thing Will Be Fine 3D Review