Features
2
0
previous article
Meant for Another Time: 10 Keira Knightley Performances That Prove She’s the Ultimate Period Piece Actress
next article
Five Tips to Make the Most of Your Time at an International Film Festival

Sundance has the indies, Toronto has the giant debuts of future Oscar winners, New York has the incredible guest appearances, but Chicago has the ultimate international line-up. With a catalogue of nearly 200 films from dozens of countries and a special focus on Scandinavian cinema, the 50th Chicago International Film Festival represents a snapshot of contemporary cinema from all around the globe. The fest opens on October 9th with Liv Ullmann’s “Miss Julie,” and runs daily through the 23rd at AMC’s River East 21.

We’ll be releasing our full reviews, interviews, and much more every day during the fest, but we’re excited to offer a brief preview of our favorite films showing at the festival. 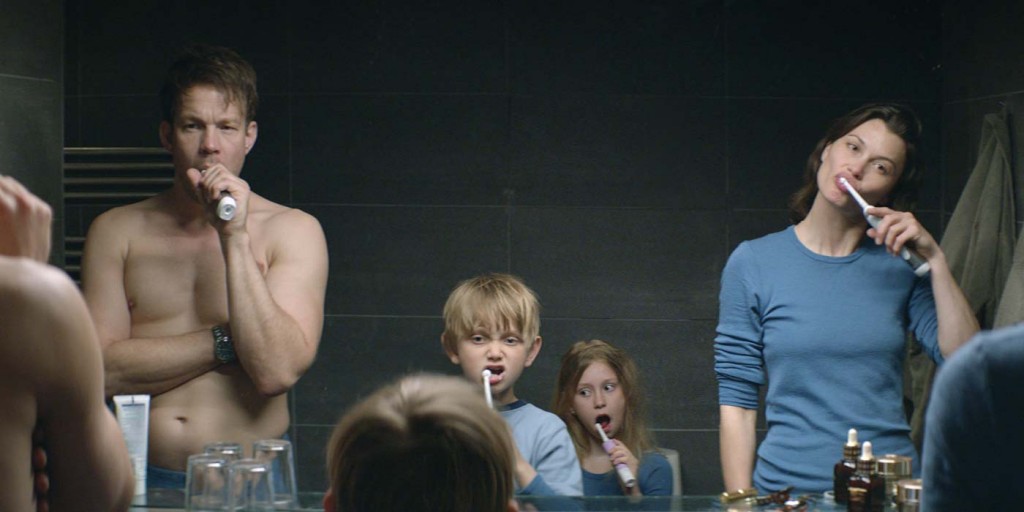 A Swedish family’s vacation to a ski resort in the French Alps is disrupted by an avalanche that incites instability between husband and wife. This genre-puzzler that alternates laughs with an ominous orchestral score is Sweden’s entry to the foreign language competition at the 87th Academy Awards. Leads Johannes Kuhnke and Lisa Loven Kongsli capture the marital fight that goes unspoken, and director Ruben Östlund raises questions on masculinity and moral responsibility that couples will be arguing about on the ride home from the theater. 118 minutes. Swedish and English with subtitles. 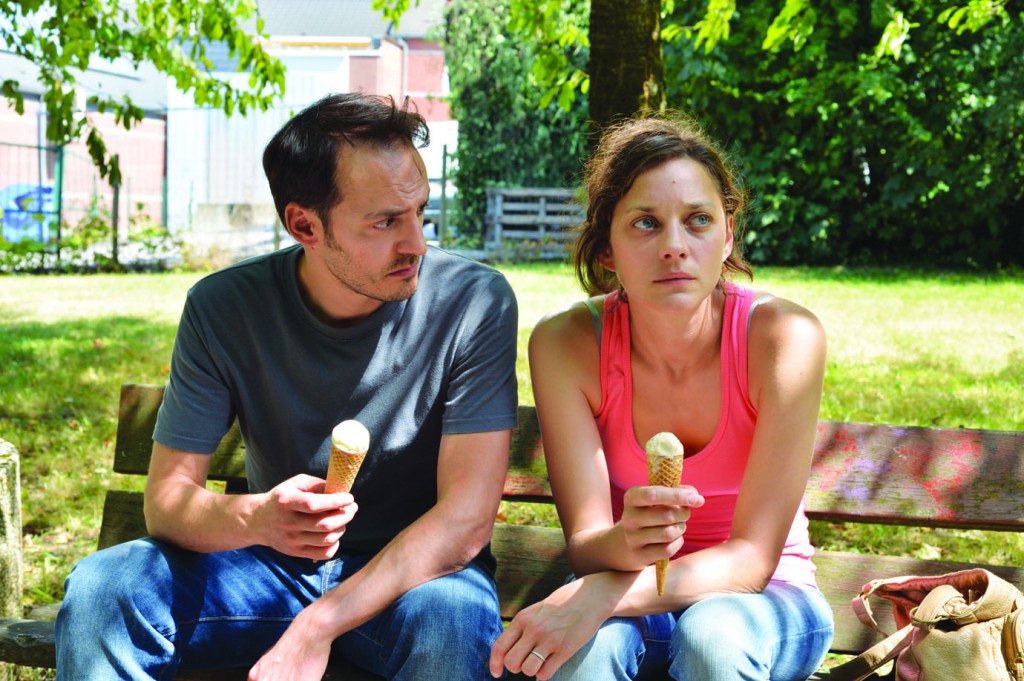 Sandra, a working class Belgian woman (Marion Cotillard), has a single weekend to fight for her job and financial security after her boss convinces her co-workers to take a €1,000 bonus over keeping her on. Tight, handheld camera work and a commitment to realism through long takes and imperfect but truthful compositions allow Cotillard, one of France’s most consistently stunning actresses, to thrive at a level of nuance we’ve missed from her other roles limited by quicker editing and pacing. Would you save Sandra’s job, or take the money? “Two Days, One Night” presents a moral quandary to sixteen people and explores how they respond, representing the spectrum of humanity. This enormously satisfying neorealist domestic drama exposes working class hardship without sentimentality and is The Dardenne Brothers’ most compelling film since 2005’s Palm d’Or winner “L’enfant.” 95 minutes. French with subtitles. 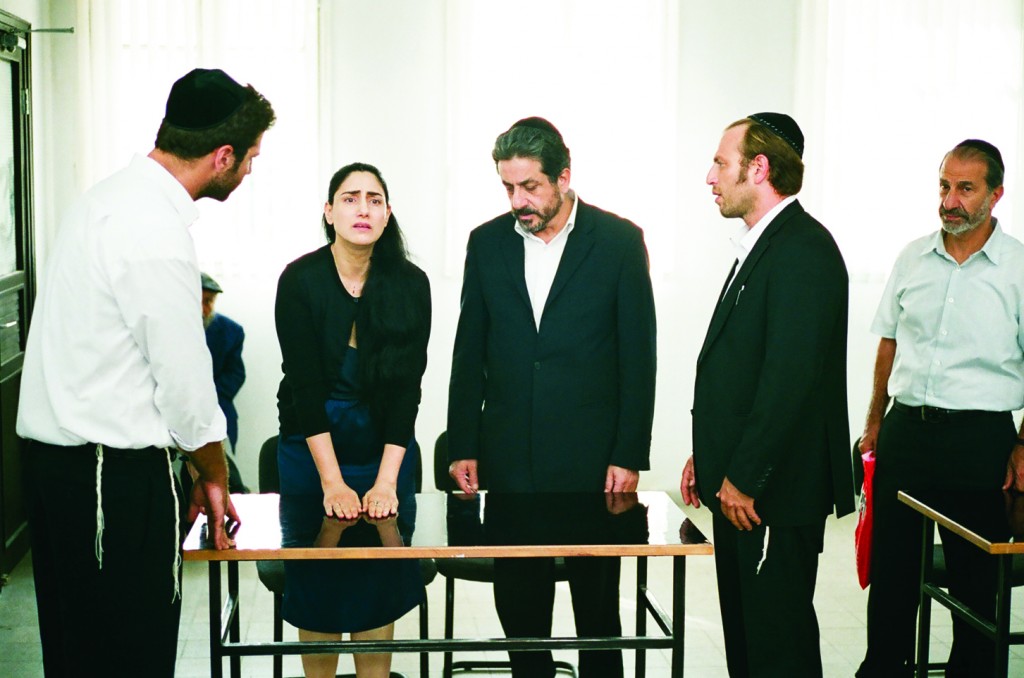 Gett: The Trial of Viviane Amsalem

Viviane doesn’t love her husband any more; in fact she hates him. But until her husband is willing to grant her a divorce, she’ll be ordered by the Israeli court to remain, imprisoned, in her marriage. This emotionally involving chamber piece takes place entirely in the courtroom as Viviane (played by Ronit Elkabetz, who co-directs with Shlomi Elkabetz) makes her appeal to the rabbi judge over the course of several years. Earnest performances from veteran actors make this an immersive experience that will leave you reeling against traditionalism. 116 minutes. Hebrew, French, and Arabic with subtitles. 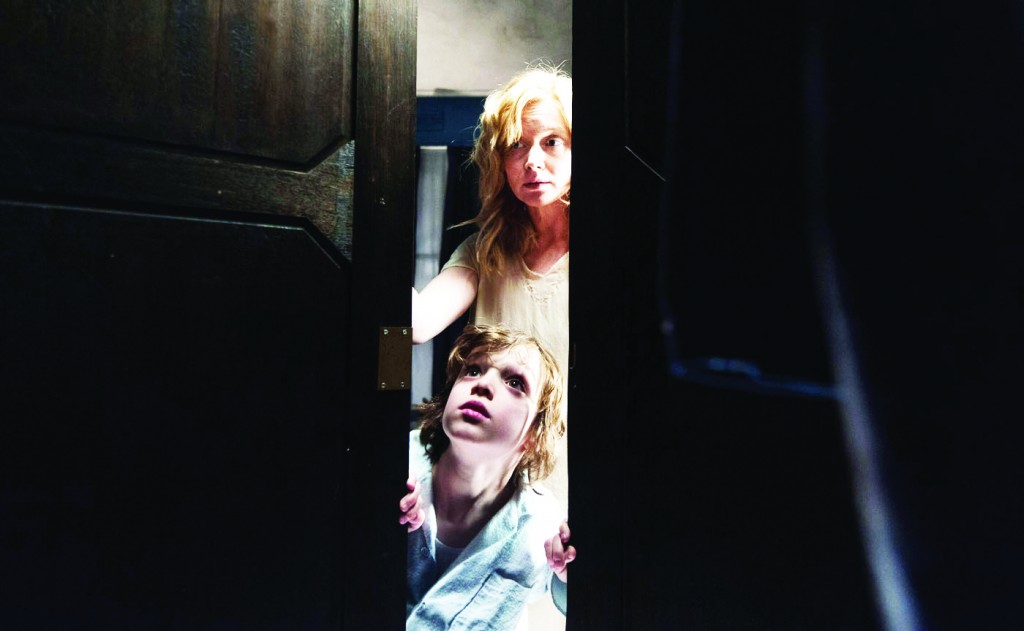 After rave reviews from Sundance and sweeping the horror category at this year’s Fantastic Fest, this feature debut from Jennifer Kent is the real deal. “It’s in a word or it’s in a look, you can’t get rid of the Babadook.” After the brutal death of her husband, Amelie (Essie Davis) struggles to maintain control of her troubled six-year-old son Samuel (Noah Wiseman) when a two-dimensional monster from a mysterious pop-up book comes to life to terrorize her family. This inventive spin on the home-invasion thriller is routed in the fears of children and parents alike. By projecting the Babadook as an extension of grief, Kent enables the antagonist to, for once, be a reasonable, additive element to the plot. From the sound design that enlivens every object with a deep thumping or high-pitched buzzing, to the wonderfully creative cinematography, to young Wiseman’s truly disturbing performance, “The Babadook” is the year’s must-see horror film. 95 minutes. 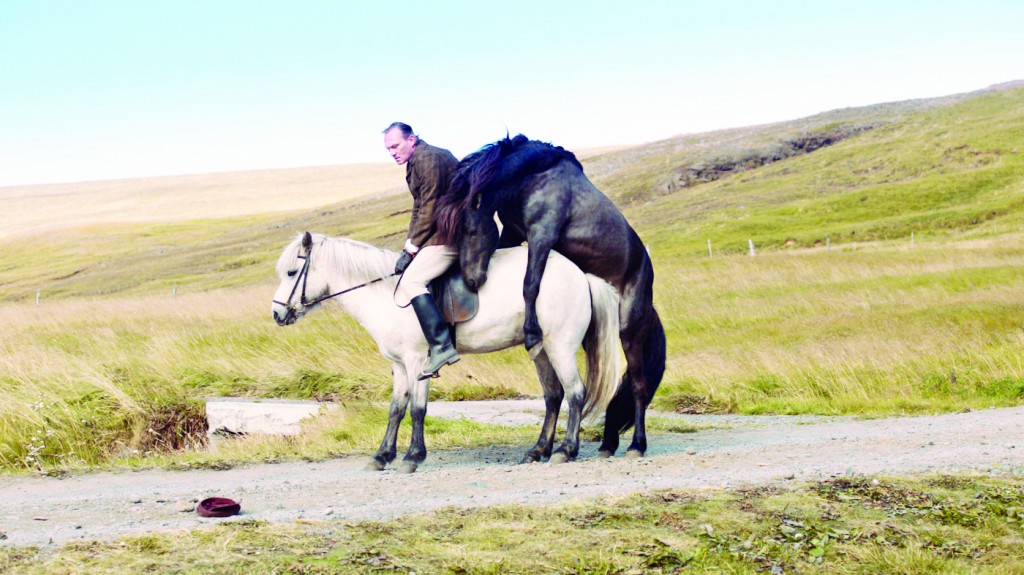 Of Horses and Men

Of Horses and Men

An Icelandic farming community is the center of a series of overlapping vignettes that explore the relationships between humans and horses in “Of Horses and Men.” Horses today function as both a utility and a pet to us, but writer-director Benedikt Erlingsson hopes you may just see them as equals by the end of the film. The first of six stories featured here is an outstanding short film in its own right – it draws lines between man and horse that I felt excited to explore – but the rest of the film that follows comes up underwhelming as Erlingsson fails to again reach that height of storytelling. Still, a small idea gets a small movie – at only 80 minutes this is a bite-size eye-opener that will shift your worldview in its own slight way. 81 minutes. Icelandic, Swedish, and English with subtitles.

A busload of strangers seemingly become the last humans on Earth after an unexplained apocalyptic event erases all signs of human life in this midnight movie blowout from Hong Kong cult director Fruit Chan. Huge shots of the empty streets of Tai Po show off some serious production value, but it’s the use of mixed source lighting that impresses the most. Fluorescents and street lights desaturate and add grit to the image while the neon lights of Hong Kong push through with vivid pinks, blues, and reds. As the group of survivors explore the city and propose theories on what happened, they begin to realize that without laws or rules, the biggest threat they could be facing is themselves. A sagging stretch of dialogue pads the runtime unnecessarily to two hours, but “The Midnight After” will be a ton of fun at any late night showing with a packed audience. 120 minutes. Cantonese with subtitles.

With genre film, sometimes to deliver on the tropes is enough. “The Salvation” and its story of lone-settler-turned-revenge-seeking-cowboy may not be revolutionary, but with a confident mix of convention and a clever use of budget, it’s a rare Western-throwback that understands, beyond shoot-outs and horse chases, the dramatic roots of its elders. Kristian Levring directed; the cast includes Mads Mikkelsen, Eva Green, Jeffrey Dean Morgan, Eric Cantona, and Mikael Persbrandt. 89 minutes. 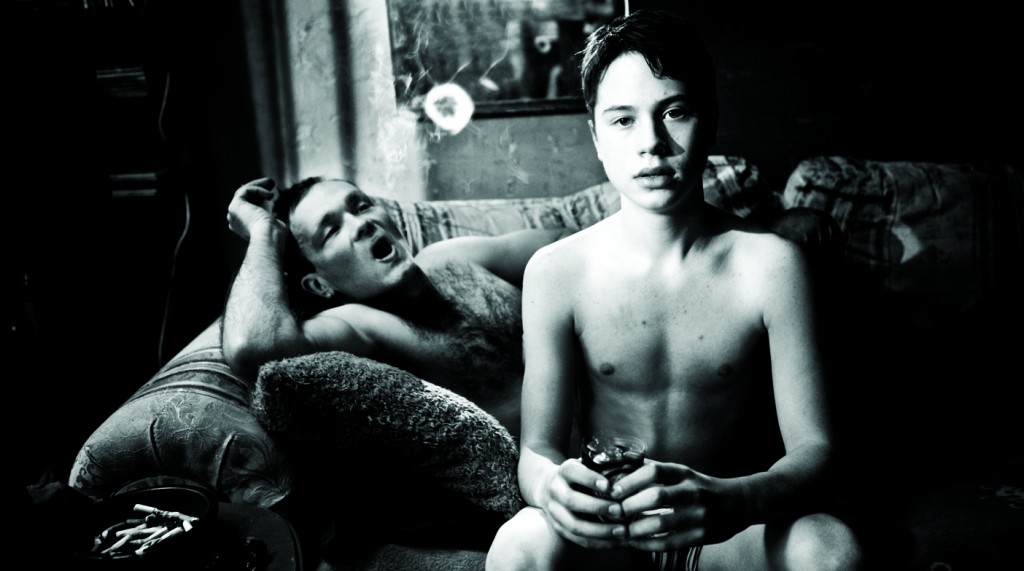 Antoine Doinel wanders into a Lynchian universe in “Concrete Night,” the Helsinki-set tale of a few formative days in a fourteen-year-old boy’s life, guided by a misplaced respect in his older brother’s ideals. Finnish documentarian Pirjo Honkasalo (with his first narrative film in sixteen years) and cinematographer Peter Flinckenberg elected to photograph the film in gloriously high contrast black and white. The early 60’s European look and feel of the film conflicts with its more contemporary concerns as the boy looks for magic in a world that’s doing its best to squash it out of him. 96 minutes. Finnish with subtitles.

The day after the 2009 Iranian presidential election ignites a chaotic protest in the streets of Tehran, a group of demonstrators flee the streets and burst into Ali’s (Vassilis Koukalani) high-rise apartment. As the group leaves, Sara (Mina Kavani), a young, passionate opponent of the Iranian government, sticks behind and begins an intense, erotic relationship with 50-year-old Ali. “Red Rose” is a monolocation feature opened up through clever use of archival footage from the actual 2009 protests that resulted in more than 40 casualties and thousands of arrests. The slow uncovering of Sara and Ali’s backgrounds carries the film through most of its 90 minutes, but this cramped feature set in a single apartment could ultimately do with a bit of fresh air. 88 minutes. Farsi with subtitles. 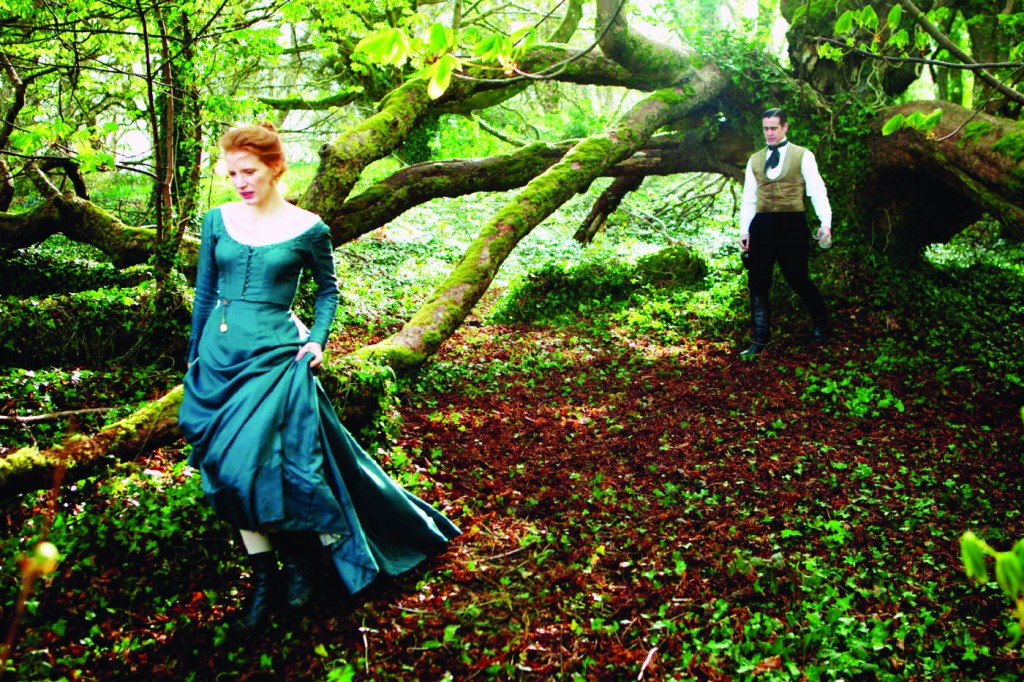 Colin Farrell stars as a lowly valet who falls for the baron’s daughter (Jessica Chastain) one long, drunken midsummer’s night. This sprawling Victorian adaptation of August Strindberg’s 1888 play mostly concerns the verbal dueling of a man and woman from different classes who feel drawn to each other and escalate their relationship beyond repair. Along the way, short trips into the massive estate’s gardens and tunnels offer director Liv Ullmann (famed for her many collaborations with Ingmar Bergman) opportunities to embrace the cinematic medium, but for the most part this version of “Miss Julie” remains true to the stage with a mostly static, panning camera covering long stretches of dialogue. The lead performances, while fiercely committed, lack subtlety, but the film’s costumes and sets make it a must-see adaptation for theater and period piece enthusiasts. 130 minutes.

If you ended up a tearful mess after “The Fault in Our Stars,” consider it a warm-up act to “Zurich,” the unflinchingly-told story of a terminally ill young woman’s decision to seek assisted suicide. Lea (Liv Lisa Fries) travels to Zurich, a city known for its legalized euthanasia clinics, and successfully gets approval for a lethal cocktail used to peacefully end the lives of medical patients living in a constant state of suffering. She invites her family to be by her side for her death, but finds her mother (Lena Stolze) unwilling to accept her decision. This is a topic you’ll no doubt want to run from, and that reaction is part of the struggle for Lea’s wishes to be heard. No one wants to look at the facts when it comes to a young person dying. “Zurich” may leave you with a walloping sense of sadness, but it provides a necessary and unique voice to the discussion of end-of-life options that are under such fervent debate around the world. 103 minutes. German with subtitles.

A family of cattle herders living outside a West African city strives to maintain their quality of life amidst the presence of jihadists imposing their laws on the people of Timbuktu. Director Abderrahmane Sissako (“Bamako”) examines an especially relevant world issue here with admirable humanity. Extremists are exposed as manipulators and intimidators, but Sissako stops short of caricature. The resilience of strong women is particularly highlighted, and while the dramatic crescendo failed to fully compel me, many sequences such as an illegal youth soccer game played with an imaginary ball are achieved with great poignancy. 97 minutes. Arabic, Bambara, French, English, Songhay, and Tamasheq with subtitles.

An internationally esteemed actress (Juliette Binoche) struggles to get into the skin of a new character in “Clouds of Sils Maria.” Olivier Assayas (who directed the exquisite “Summer Hours”), as his best work does, contemplates the transient nature of our relationships with others and ourselves, but this time uses the titular cloud formations (an unexplained phenomenon that finds far-away clouds making their way to the valleys of the Alps) as both commentary on human nature and a visage of the divine. Contemplative yet full of humor (Assayas has some fun with mocking Hollywood productions, but also pays tribute to how they can subvert their own limitations), “Clouds of Sils Maria” is a visually accomplished meta-journey as an actress draws unwanted connections to her character. 123 minutes. German and English with subtitles.

Taylor is a Chicago-based writer and aspiring film historian. He is the editor here at TFP, and has contributed to a number of international publications such as Cinema Scandinavia, PopMatters, and Room 101 Magazine. He can also be found listening to podcasts, researching topics he has little use for, or running after a city bus.
You might also like
chicago international film festivalfilm festivalForce Majeuregett: the trial of viviane amsalem

by Taylor Sinople on October 7, 2014
If you’re new to attending a film festival, you’re probably going to be a bit overwhelmed by the selection. Whether you plan to catch a single film or twenty, here’s five tips to help you navigate the celluloid seas (who are we kidding, everything’s going to be digital) and make the absolute most of your […]
Comments
Leave a reply
Add Comment Register

END_OF_DOCUMENT_TOKEN_TO_BE_REPLACED
Taylor Sinople Picks: The 16 Best Films of 2016
Form and Function in Alex Ross Perry’s “Queen of Earth&...
Digging for Fire and Unexpected: Husband and Wife Process Parenthoo...
Every Thing Will Be Fine 3D Review