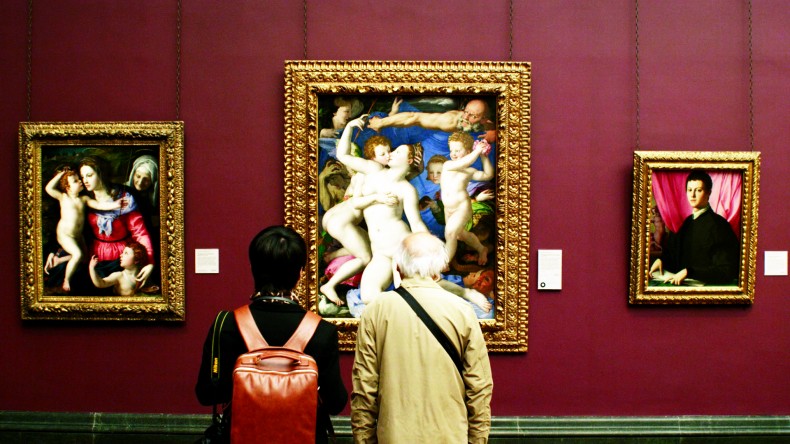 After 40 films investigating and documenting social institutions, an art museum is a logical next step for Wiseman. In this immersive three-hour experience, he turns his camera towards the National Gallery and its 2,300-some paintings from the 13th to 20th century. Picasso, Stubbs, Bellini, Da Vinci, Rembrandt, Titian, Turner, Poussin.

The work housed in the museum is only one leg of the table, though. Also of equaled consideration are the Gallery’s six million yearly visitors, one thousand employees, and executive board.

With unfettered access to the museum’s facilities, Wiseman captures a fascinating snapshot of our society’s interaction with art. The film opens with an audience crowded around a tour guide who asks them to imagine they were viewing the piece in front of them from the time in which it was created – a time when the piece would be hanging in a vaulted stone church and the only sources of light would come from the flames of candles. And under that candlelight, the figures and faces may appear to just slightly waiver, and you could imagine them to be living.

“National Gallery” investigates the notion that a painting of truly masterpiece status is a living work that, across centuries, can continue to elicit a complex emotional response from the viewer. We discuss great works of art endlessly and become entangled in their narratives. What are we looking at, really, though? Pigments on a canvas. Pigments assembled in shapes that we can recognize not only as human figures, but as ones possessing life – thoughts and feelings that we map our own experiences onto. Wiseman beautifully captures this illusive power of art and the outrageous lengths we go to protect and preserve it.

Behind the scenes, carpenters construct the elaborate, gold foil-plated frames. Lighting technicians ensure the light falling on each panel of a triptych is even and flat for optimal viewing. A restoration artist applies restorative tones to a fading piece.

In the executive offices, Nicholas Penny – the Gallery’s President of six years – argues with his team over allowing the museum’s façade to be rented for advertisements. He speaks to the image he feels they have the right to uphold. A woman argues that the public sees their institution as “put on a pedestal,” and they should put more effort into considering the experience of the average visitor.

A Da Vinci collection comes through, the museum’s most profitable exhibition of the year. Activists climb to the roof and hang a banner that’s promptly taken down by police. Students in a class practice sketching a nude figure.

All of these events unfold without narration or traditional structure, allowing for an almost hypnotic sense of immersion after the first hour. The National Gallery could easily be the subject of a ten-hour PBS special, but Wiseman restricts his film to three. Even at sixty minutes shorter than his previous film, “At Berkeley,” “National Gallery” seems to run a bit longer than most are willing to sit. Despite the subject and runtime being clearly listed in the festival schedule, “Gallery” saw the most walkouts of any film I’ve seen at the fest. The seems to speak to the idea that people feel they’ve “seen enough” after two hours of Wiseman’s work, but they’re making a mistake. Don’t confuse the lack of structure for a lack of a dramatic arc. “National Gallery” leads to a quiet conclusion, but a definite conclusion nonetheless.

Along the way, small insights can be picked up, like the growing concern over budget cuts. Wiseman is ultimately, in his refusal to aggressively follow one particular story, creating a lasting capsule of a few months at an institution that future generations will be able to view to understand our culture at this point in time. To view “National Gallery” now is to view a reflection of contemporary life in order to better process the world around us. There is no information on the history and origin of the National Gallery to be found in Wiseman’s documentary, instead of facts and dates he hones in on the humans that make this building a part of their lives. “National Gallery” may not be Wiseman’s most socially groundbreaking work, and with a filmography such as his it may not even make it into the “essential” category, but it is a rare doc untainted by agenda, and one to feel bettered by having seen.

Taylor is a Chicago-based writer and aspiring film historian. He is the editor here at TFP, and has contributed to a number of international publications such as Cinema Scandinavia, PopMatters, and Room 101 Magazine. He can also be found listening to podcasts, researching topics he has little use for, or running after a city bus.
You might also like
National Gallery

END_OF_DOCUMENT_TOKEN_TO_BE_REPLACED
Taylor Sinople Picks: The 16 Best Films of 2016
Form and Function in Alex Ross Perry’s “Queen of Earth&...
Digging for Fire and Unexpected: Husband and Wife Process Parenthoo...
Every Thing Will Be Fine 3D Review