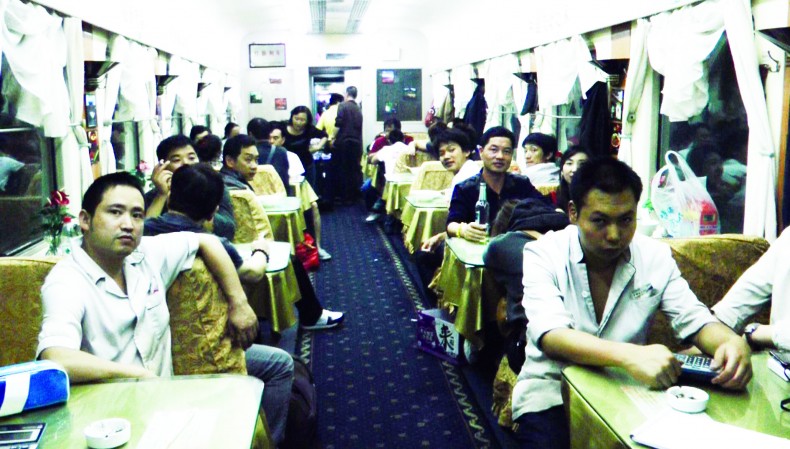 “The Iron Ministry” opens to the rhythmic roar of a train. It’s one of many J.P. Sniadecki rode while spending three years in the People’s Republic of China photographing life on Chinese railways.

If you’ve seen the eerie, inexplicable 2012 documentary “Leviathan,” then you may already be familiar with the Harvard Sensory Ethnography Lab – the program dedicated to “innovative combinations of aesthetics and ethnography” from which this film also comes.

While “Leviathan” was a visceral mood-piece assembled from footage of a North Atlantic commercial fishing boat, “The Iron Ministry” turns its lens to the goings-on in various train cars. J.P. Sniadecki directed, shot, and edited this piece that functions as a snapshot of contemporary Chinese life. Excluding its very long, black-screen opening in which we’re given only sound to construct the environment of a massive, track-pounding train, Sniadecki is more interested in documenting culture than he is in crafting an art piece in the vein of “Leviathan” – so viewers looking to visit China with a simple trip to their local theater will be pleased.

The back of the lower class car to the head of the bullet train is covered, forging clear differences in the quality of life of travelers from various economic backgrounds. All of society is filtered through this one vessel. Conversations taking place on the train cover religion, politics, terrorism, marriage, and more – the most striking of which may be a child’s joke that passengers with live bombs should be invited to ride the train in order to assist with the nation’s population control policy.

Sniadecki is an excellent camera operator with great instincts. He may wander, for example, from three business students in an argument about Chinese economics, to the service worker passing by sweeping hundreds of cigarette butts into a massive pile. His camera wanders into the vestibule between cars and finds a man sleeping on the ground – seemingly unable to afford a proper seat, but wearing an unmistakable pair of brand new Nike shoes. These are moments in which Sniadecki is crafting, live, in-camera, shots fit for a scripted narrative film.

He’s less effective as an editor. Leaving his footage up to us to decipher (there is no voiceover or clear purpose laid out), “The Iron Ministry” feels like a project that doesn’t necessarily need to be presented in this particular order or length. There’s some mystery early on while the camera silently floats into these people’s lives, recording them without warning or permission, but this disappates when Sniadecki begins to quietly interview passengers on the train. At that point, the film enters a more traditional realm, which makes its overall hands-off approach all the more bewildering. Without a particularly poignant image to end on or a clear flow of ideas, “The Iron Ministry” offers observations, but no conclusions.

So as to whether it’s ethnographic or not, it lies close to cinéma vérité pioneer Jean Rouch’s “Chronicle of a Summer” in that it attempts to capture the essence of a culture at a place and time, but calls into question the legitimacy of the truth found in observational cinema when the subjects are aware they’re being filmed. Without a strong, anthropological presentation, “The Iron Ministry” is a glimpse of Chinese culture, but is without the means to pin anything down as definitive truth.

END_OF_DOCUMENT_TOKEN_TO_BE_REPLACED
Taylor Sinople Picks: The 16 Best Films of 2016
Form and Function in Alex Ross Perry’s “Queen of Earth&...
Digging for Fire and Unexpected: Husband and Wife Process Parenthoo...
Every Thing Will Be Fine 3D Review