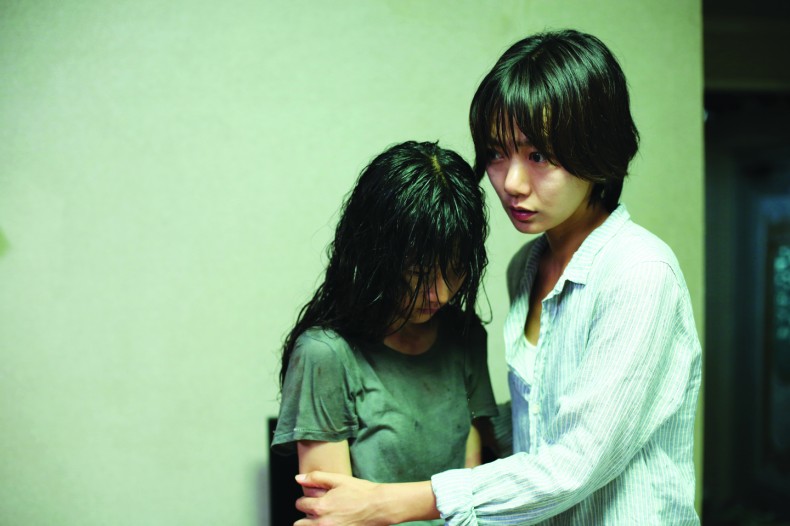 When Young-Nam (Doona Bae, “Cloud Atlas”) is transferred to a small South Korean town to act as police station chief, it takes all of half a day to realize the residents aren’t going to offer their respect for her easily. She’s warned not to start any trouble with her new post, but it isn’t long before she sees a young girl in a tattered dress (Sae-ron Kim) running from her drunk, raging father (Sae-Byeok Song) and feels compelled to step in.

When Young-Nam sees the welts on the girl’s back, she takes her in to her own home temporarily but quickly loses her grip on the situation when the town finds out the reason she was transferred.

“A Girl At My Door” begins as a character study. Young-Nam is an interesting, contradictory character. She fights against alcoholism in the town but is a secret alcoholic herself. Her past unravels and damages her present (note that this film is presented in the “Outlook” collection of LGBT films at the festival).

As it goes on, though, and the pace quickens, writer-director July Jung chooses to increase the intensity by adding additional elements rather than advancing the ones already introduced. A scuffle involving an illegal immigrant is probably the most unnecessary addition. The core film – a woman attempting to protect a young girl from her abusive father – is a good one, but pulling away from that conflict is usually a mistake.

When the film is working, Jung shows a solid understanding for the importance of backstory and doesn’t make simple “good” and “bad” characters but flawed ones dealing with the events of their past. This is a film advancing in opposite directions – both towards an uncertain future and a shameful past. Sae-Byeok Song, my favorite antagonist performance from the festival, is excellent as the abusive father. In his moments of rage he betrays his own veiled insecurities in a highly believable way.

“A Girl At My Door” is a fine festival film, and a valuable exposition on social injustices allowed to live behind closed doors, but it’s the well-crafted wooden sculpture just before the final etchings are made. Roughed-in art can be more emotional, but a masterpiece requires some finesse.

END_OF_DOCUMENT_TOKEN_TO_BE_REPLACED
Taylor Sinople Picks: The 16 Best Films of 2016
Form and Function in Alex Ross Perry’s “Queen of Earth&...
Digging for Fire and Unexpected: Husband and Wife Process Parenthoo...
Every Thing Will Be Fine 3D Review