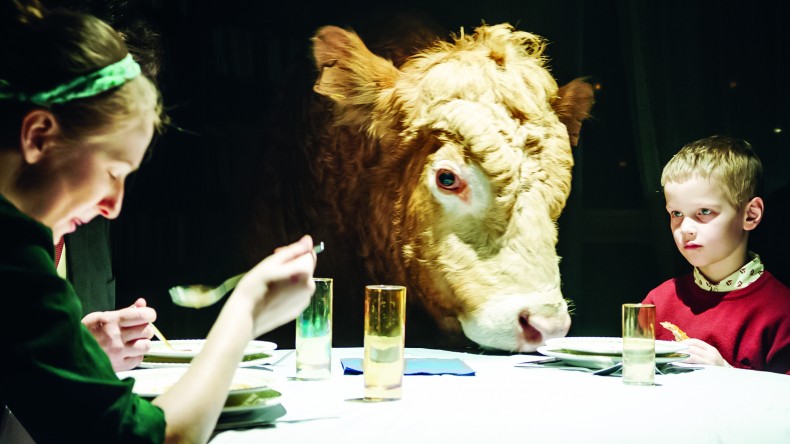 After surviving a fall from the roof of her apartment complex, a woman crawls back up to her room, passing a different absurd scenario on each floor.

Notorious Hungarian form-manipulator György Pálfi (“Hukkle,” “Taxidermia”) directs this collection of short films that take place within rooms of the same building. Highlights of the seven vignettes include the story of a couple with a peculiar obsession with cleanliness, a man who reaches enlightenment and then some in a meditation class, and a woman’s unforgettable appointment with a gynecologist.

Pálfi uses these irrational fantasies to allow a surprisingly honest reflection of our lives as humans. Literal thinkers may take issue with the symbolism used here. One audience member in the post-screening Q&A with Pálfi demanded an explicit explanation of the logic behind some of these fantasy sequences, but this isn’t a film operating by the rules of the real world, and that’s what’s so fun about it.

The filmmakers are clearly having a lot of fun with “Free Fall,” too – all seven vignettes are captured with a completely different style. Genres range from sci-fi to sitcom comedy, and each new room offers a new look.

“Free Fall” came out of a need to create a very quick production. Pálfi was financed to create a new film in a short period of time – less than half a year. He and regular collaborator Zsófia Ruttkay developed the concept and wrote the film in two months, shot it in one month, edited for a month and a half, and used the final month for CGI and sound.

The technical production is top notch and not at all a reflection of the short lead times. Albert Márkos and Amon Tobin’s back catalogue provided the slick, dancey soundtrack (although they were not able to write an original score due to the time limitations), and set decorator Tamás Tamási walks away from the film with a feature that could function as his new promo reel, considering the wide variety of looks he was tasked with achieving.

Piroska Molnár stars as the old woman who falls off the roof. She was awarded a special prize at the Chicago International Film Festival last year for her work in “The Notebook” – the film that ended up being my favorite from the fest – and she returns this year in “Free Fall” with a similarly unfaltering contempt for the world. She’s so good that her limited role in the film quickly exposes the one area of production that does end up feeling rushed – the structure.

The woman is meant to thread the needle between the vignettes by passing the doorways that we then enter to witness the goings-on inside, but there’s no clear reason for us to do so. Her involvement in the narrative (as well as one or two of the weaker vignettes with disappointing pay-offs) all feels a bit half-baked. It doesn’t help that the official plot description for the film describes the woman as bearing witness to these various stories, but in actuality she is not around when they’re taking place.

Prior to the screening, Pálfi asked the audience to view the film not as a series of shorts but as a single, cohesive feature. And the cumulative effect of the vignettes does amount to a singular encapsulation of life of Earth, but we are left viewing the stair-climbing woman’s story as an additional vignette rather than the thread that weaves them all together.

Operating at this level of visual delight, though, and after playing with form in the nearly-silent “Hukkle,” the multi-generational “Taxidermia,” and the character-shifting “Final Cut: Hölgyeim és uraim,” Pálfi deserves to be a revelation to American audiences as a Jean-Pierre Jeunet was with “Delicatessen.” Slick, inappropriate, and peppered with dark laughs, “Free Fall” is the film that could do it.

Taylor is a Chicago-based writer and aspiring film historian. He is the editor here at TFP, and has contributed to a number of international publications such as Cinema Scandinavia, PopMatters, and Room 101 Magazine. He can also be found listening to podcasts, researching topics he has little use for, or running after a city bus.
You might also like
Diána KissPiroska Molnár

by Taylor Sinople on October 20, 2013
Sandwiched into one of the smaller theaters at the 49th Chicago International Film Festival, “The Notebook” quietly became one of the best treats of the fest. Despite being part of the Main Competition at the festival and Hungary’s submission to the 86th Annual Academy Awards, János Szász’s World War II drama received little of the buzz […]
Comments
Leave a reply
Add Comment Register

END_OF_DOCUMENT_TOKEN_TO_BE_REPLACED
Taylor Sinople Picks: The 16 Best Films of 2016
Form and Function in Alex Ross Perry’s “Queen of Earth&...
Digging for Fire and Unexpected: Husband and Wife Process Parenthoo...
Every Thing Will Be Fine 3D Review