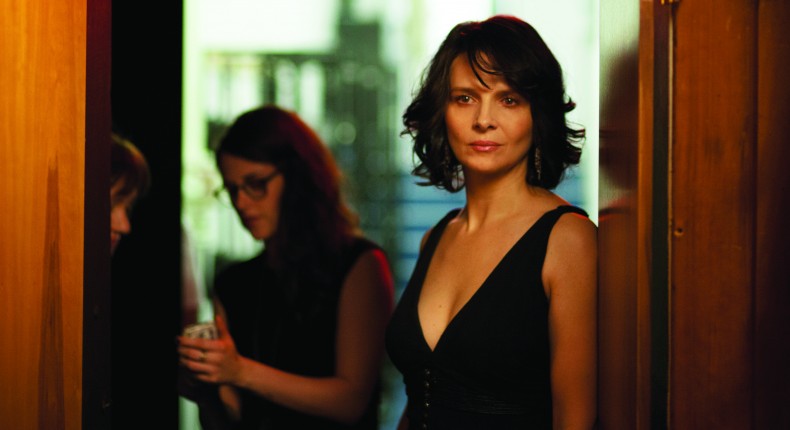 Maria, an internationally esteemed actress (Juliette Binoche), is asked to join the cast of the stage production that first made her famous, but this time as the older mentor character that is taken advantage of by a younger employee (the role she first played).

Olivier Assayas (who directed the exquisite “Summer Hours”), as he does with all his best work, contemplates the transient nature of our relationships with others and ourselves, but this time uses the titular cloud formations (an unexplained phenomenon that finds far-away clouds making their way to the valleys of the Alps) as both commentary on human nature and a visage of the divine.

Contemplative yet full of humor (Assayas has some fun with mocking Hollywood productions, but also pays tribute to how they can subvert their own limitations), “Clouds of Sils Maria” is a visually accomplished meta-journey as an actress draws unwanted connections to her character.

Kristin Stewart shares the screen with Binoche as her younger, personal assistant who helps her run lines in preparation for the play. As Maria struggles to get into the skin of the older character, their rehearsals together dissolve the thread between the play and reality. Stewart bucks the criticism and uses her signature apathy as a mysterious weapon in this role hand-made for her.

Some themes are particularly slow to develop, and the meat of what Assayas is getting at is less immediately digestible than in his past films, but the characters remind us that art is interpreted different as the observer changes, matures, and grows. “Clouds” is one to revisit – it is designed to be viewed from the perspective of both the older and younger characters and will be particularly enriching to experience from both sides of life.

Taylor is a Chicago-based writer and aspiring film historian. He is the editor here at TFP, and has contributed to a number of international publications such as Cinema Scandinavia, PopMatters, and Room 101 Magazine. He can also be found listening to podcasts, researching topics he has little use for, or running after a city bus.
You might also like
Chloë Grace MoretzciffClouds of Sils MariaJuliette Binoche

by Josef Rodriguez on November 2, 2014
Featuring a refreshingly low-key performance by Keira Knightley, and a noticeable spike in visual and thematic maturity, “Laggies” is director Lynn Shelton’s best work yet.

END_OF_DOCUMENT_TOKEN_TO_BE_REPLACED
Taylor Sinople Picks: The 16 Best Films of 2016
Form and Function in Alex Ross Perry’s “Queen of Earth&...
Digging for Fire and Unexpected: Husband and Wife Process Parenthoo...
Every Thing Will Be Fine 3D Review