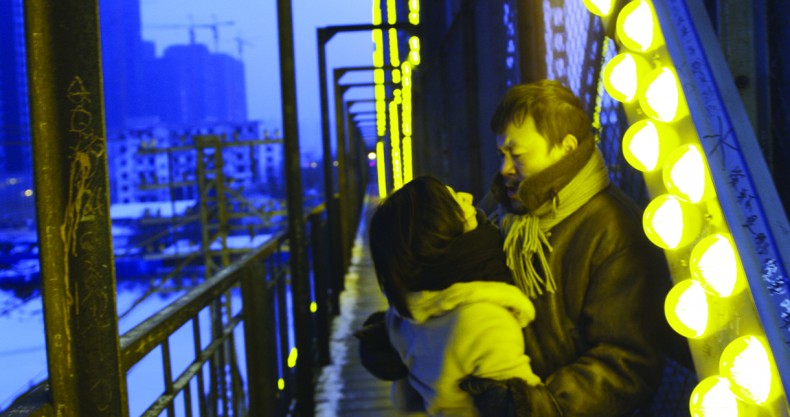 1999: A severed hand makes its way down the production line at a Chinese coal plant. More body parts turn up at fifteen other plants simultaneously. Officer Zhang Zili’s (Fan Liao) investigation leads to a bloody, career-ending debacle and the trail goes cold.

2004: Five years later, Zhang Zili, now a drunken security worker, picks the case back up with the aid of his old partner (Xuebing Wang) when identical killings begin. Working off the books, they find a common link between the crimes in a female dry cleaners employee who happened to know both victims (Lun Mei Gwei).

Diao allows the camera to soak in the atmosphere of an urban, wintery Northern China. The snow and ice slows the pace of movement and prohibits any back-alley foot chases – an expected and somewhat overused motif in East Asian crime thrillers. Instead, “Black Coal, Thin Ice” moves at the speed of real life with frighteningly realistic outbreaks of graphic violence. Where stylish and fluid killings can become easy to take in due to their use of style over emotional substance, a shooting in Diao’s film takes twice as long as anywhere else – giving the audience time to watch a character slowly reach towards a gun that no one in the room has their eyes on, realizing what’s about to happen just before it does. It’s loud, brutal, and most importantly necessary.

“Black Coal” is a great foreign film for American audiences because it’s an authentic crime saga – a detective procedural that doesn’t get sidetracked by style and has a whole mess of secrets to uncover. There’s no singular “twist” at work here, just the slow unspooling of a layered past by a man seeking redemption for his past failures as a police officer.

Fan Liao, in one of his first leading roles, thrills as Zhang and promises a long career in Chinese cinema. The first act of the film could stand to have a few bolts tightened in terms of clearly communicating its story, but Liao remains an alluring presence throughout.

The screening was introduced with a video clip from Martin Scorsese wishing the festival a happy birthday on its 50th anniversary, and putting Diao’s film in the context of Scorsese’s crime sagas makes a lot of sense. Both filmmakers are working in underworld crime spaces with plots that don’t arch so much as they wind.

Taylor is a Chicago-based writer and aspiring film historian. He is the editor here at TFP, and has contributed to a number of international publications such as Cinema Scandinavia, PopMatters, and Room 101 Magazine. He can also be found listening to podcasts, researching topics he has little use for, or running after a city bus.
You might also like
Black Coal Thin Iceciff 2014

by Taylor Sinople on October 27, 2014
With the 50th Chicago International Film Festival coming to a close, we’ve ran out of chances to catch the films from around the world that will define the next year of cinema. Here’s our favorites from this year’s CIFF: 10. The Babadook Directed by Jennifer Kent Australia See it: November 28, 2014 From the sound design that […]
Comments
Leave a reply
Add Comment Register

END_OF_DOCUMENT_TOKEN_TO_BE_REPLACED
Taylor Sinople Picks: The 16 Best Films of 2016
Form and Function in Alex Ross Perry’s “Queen of Earth&...
Digging for Fire and Unexpected: Husband and Wife Process Parenthoo...
Every Thing Will Be Fine 3D Review